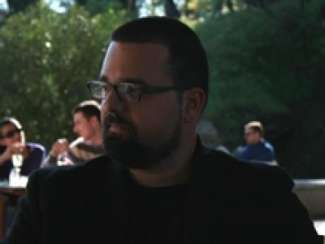 Andrej Nikolaidis was born in 1974 in Sarajevo, to a mixed Montenegrin-Greek family. Until the age of six, he lived in the city of Ulcinj, where he returned in 1992 after the war in Bosnia erupted. Since 1994, he has written for regional independent and liberal media, as well as for cultural magazines. He is considered by many to be one of the most influential intellectuals of the younger generation in the region, known for his anti-war activism and for his promotion of the rights of minorities.

Nikolaidis also publicly defended the victims of police torture, which resulted in his receiving many threats, including a death threat during a live radio appearance. He has often stated that he considers freedom of speech to be the basis of freedom.

He has worked as a columnist in the weekly magazine Monitor and for publications including Vijesti (Montenegro), Dnevnik (Slovenia), Slobodna Bosna (Bosnia-Herzegovina), E-novine (Serbia), and Koha Ditore (Kosovo). Since 2010, he has been employed as an advisor for culture and free society in the parliament of Montenegro.

EUPL Year
2011
EUPL Country
Montenegro
Sin (The Son)
The Son follows one night in the life of a hero with no name, a writer whose life is falling apart. That afternoon, his wife left him, while for many years he has been in conflict with his father, who blames him for his mother’s death. Incapable of finding inner calm, he leaves into the warm, Mediterranean night, in the city of Ulcinj, itself a multilayered mixture of European dimensions, African influences, and the communist past.

The hero of The Son is a man who can’t adapt to new times and rules. On his journey into the night, he meets an assortment of characters: a piano student from Vienna who has abandoned his musical career and converted to Islam, a radical Christian preacher and a group of refugees from Kosovo. In the style of Mihail Bulgakov, the characters meet in the old city of Ulcinj, at the Square of the Slaves – a location where the pirates who lived in the city until the 19th century would bring and sell captured slaves, including Miguel de Cervantes, according to legend. 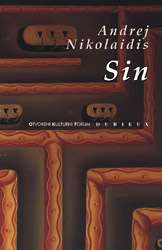 Translated by Will Firth

The first shades of night were falling. The sun was setting once more behind my great-uncle’s olive grove, which is what we called the hill laden with rows of overgrown olive trees. In fact, it was fifty hectares of viper- and boar-infested scrub blocking our view of the sea. My father claimed he had once seen ‘something other-worldly’ come down to land behind the hill. I never managed to convince him that it was just the sun. Evening after evening, we sat on the terrace waiting for darkness to fall. We watched in silence as the sun slowly disappeared behind the silhouette of the hill, which had always stood between me and the world. When the light was gone, my father would get up, state resolutely, ‘No way, that wasn’t the sun!’ and disappear into the house. From then on, the only sign of his existence would be strains of Bach which escaped from the dark of the bedroom, where he lay paralysed by the depression which had abused him for two decades. That evening the hill caught on fire. Instead of feeling a breeze from the sea, I was hit in the face by the heat of the burning forest. The fire would erase all my father’s labours once more, I thought. After each blaze, the police scoured the terrain searching for evidence which would lead them to the culprit. Needless to say, they never found anything: not a single piece of broken glass or a match, let alone a trace of the firebug. ‘They’ll never find out who sets fire to our hill, I tell you. How can they when the fire comes from the other world?’ my father repeated. When the hill burned the first time, he saw it as a sign of God: ‘My whole life had passed by without me even taking a proper look at the olive grove my uncle left me. Now there’s no olive grove left – just my obligation to the land,’ my father said in the fatalism so typical of this crazy, blighted family. He built a fence around the entire hill. He worked his way through the charred forest step by step, breaking stones and driving hawthorn-wood stakes into the rock, as if into the heart of a vampire. Then he tied barbed wire to the stakes, which tore into the flesh of his hands. For months he came home black from head to toe like a coal miner who had just come up from the deepest pit. And that’s what he was: a miner. He delved into the heart of his memories. He wasn’t clearing the charcoaled forest but digging at what was inside him, breaking the boulder which oppressed him, shovelling away the scree which had buried him alive. He came home all wet and sooty for months, until one day he announced that his work was done. The property was fenced in and cleared. He had built new dry stone walls and planted olive saplings. He took me and my mother onto the terrace and showed us my great-uncle’s olive grove for the umpteenth time. ‘I’ve resurrected it from the flames,’ my father said.