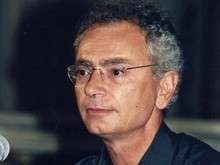 Daniele Del Giudice (b.1949). The first novel he published was Lo stadio di Wimbledon (Einaudi 1983). This book was followed by Atlante occidentale (Einaudi, 1985), a novel about changes of perceptions and feelings, an anthropological mutation caused by science and widespread technology.This attention to the scientific sector, to innovations in daily behaviour and shared perceptions, is also present in later novels and short stories such as Nel museo di Reims (Mondadori, 1989), Staccando l’ombra da terra (Einaudi, 1994), and Mania (Einaudi, 1997). Daniele del Giudice’s books have won many awards: the Viareggio Prize in 1983, the 1995 Bagutta Prize, the Selezione Campiello Prize in 1995 and in 1997 and, in 2002, the Accademia dei Lincei award for fiction. In addition to his novels, Del Giudice has published essays on Italo Svevo, Thomas Bernhardt, Robert. L. Stevenson and Primo Levi. He lives in Venice, where he teaches Theatrical Literature at the Theatre Faculty of the IUAV, the University Institute of Architecture.

EUPL Year
2009
EUPL Country
Italy
Orizzonte mobile (Movable Horizon)
As he narrates his own Antarctic expedition, Daniele Del Giudice recalls the notebooks of other courageous expeditions that are unknown to most, with shipwrecks, ships stuck for months behind ice, savage crews and sailors on the brink of desperation or annihilated by madness. These are the last true adventure writers who have created the myth and the memory of the Unknown Land, and possess an often tragic and emblematic fate as they are pushed to their limits.
Del Giudice travels to the “deepest and furthest” parts of South Antarctica. From Santiago to Punta Arenas in Chile, and further down, until, “feeling embarrassed and impeccably Martian”, he reaches “another planet, a celestial body inhabited by millions of penguins”. Exploring the area, he finds stored in its ice the history of what has lived there and those who have sought to reach it.
With a work of storytelling marquetry, a patchwork of life and literature, the author reconstructs a “hyperexpedition” that connects the explorers’ past trips and retraces their paths through the world alongside those contained in literature. Playing on the diversity of these different perspectives and voices, the author presents a “movable horizon” in space and time, but one which is stable and long-lasting in the feelings it provokes.
This is a trip beyond all sense of time, set in a hypnotising landscape, indifferent to man but with a sublime beauty: from the yellow ochre of the plains to the glaciers that drip in the water, among rocky peaks, eternal snow, precipices and a horizon of ice and light.
They are places, stories, days, years and geological eras that defy simple linear narration. It’s a natural ancient landscape that stratifies everything and crystallises every memory. This book is the poem of these simultaneous worlds. 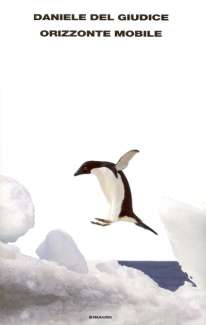 ... he was stumbling along over the stones without paying any further attention to me,
with that breathless air of ‘I’m late, I’m late’, until he must have convinced himself that his parents had gone off into the sea leaving him behind: only then did he turn toward the water and, dejected and distraught, threw himself in. Now I knew what it was about. The family scene I had witnessed was a critical moment in his training, the point when a young penguin is forced to procure – all by himself, in the sea – the krill and plankton on which he feeds, which prior to a certain time is offered to him from his parents’ beak as regurgitated pulp. I realized that I was anthropomorphizing the penguins, something I had promised myself not to do, and I spoke with Jeremy about it; better to stick to the numerous explanations of the behavior of penguins of different species which the biologists’ expeditions observed and catalogued. The trouble with stories, when it comes to penguins, is that they are told by a sole point of view, the human one. We superimpose what has to do with us over their inexhaustible imagination and curiosity, changing its meaning.
It may be that penguins too are inclined to penguinomorphize humans, and this definitely happened a few weeks later when, during an expedition on foot, as I was accompanying an international delegation of ten biologists, we encountered a caravan of Emperors, the largest of their kind. Them, the penguins, all in a row, us, the humans, all in a row. Two colonies similarly on a trek, the penguins toward the coast in search of food, we from the coast towards the interior, to reach the coldest regions inhabited by the Emperors. They, we, were experiencing the same solitude in a sea of ice and snow, and the same concerns. When they arrived at a respectful distance, the head of the Emperor penguins, a very large, important creature of their species, stretched out his neck toward us in a deep bow and with his beak against his chest made a long, gurgling speech. When he had finished his speech, still in that deferential position, he stared up into the eyes of Jacques, the head of the delegation, to see if he had understood. Neither Jacques, the most experienced ethologist, nor anyone else could understand that discourse.