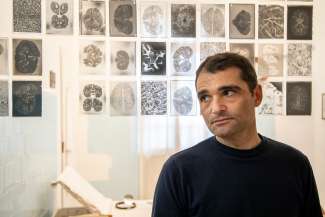 "It is the summer of 1991, Daniele is seventeen and this is his first vacation alone with friends. Two weeks away from home, to be enjoyed to the fullest among beaches, discos, alcohol and girls. But there is something he hasn't come to terms with: himself. A small inconvenience on the night of August 15th is enough for Daniele to decide to leave the group and continue the journey on foot, alone, from the Riviera Romagnola towards Rome.

He will make all sorts of encounters: people who are worn out by loneliness but still capable of leaps of humanity, others who look over an abyss of madness, people defeated by life, or incurable bullies. And he will meet love, in Emma's blue eyes. But above all Daniele will meet himself, in an intense inner dialogue. He unceasingly interprets and questions everything that happens to him, with the urgency to devour the world typical of a seventeen years old, craving to understand everything and, above all, himself." 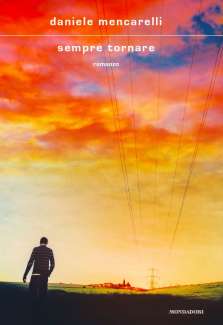 Mi ritrovo a fianco due ragazzi.

Translated from Italian by Antony Shugaar

I’ve taken rides from plenty of taxi drivers. There’s one who’s something of a regular presence, a gentleman who leaves the Castelli Romani to go to work in Rome. I’m not trying to be mean, but when I see his car coming, I stop hitchhiking; sometimes I actually walk away from the side of the road. But he still stops all the same. Oh, don’t get me wrong, he’s a perfectly nice person, likeable enough and all. But he has one serious problem, and I really don’t know how to tell him. In middle school, I had a teacher who had the exact same issue. It was her breath. And I’m talking about levels of halitosis that truly shouldn’t exist on the face of this earth.

“I’m going right near there.”

The taxi driver smokes the same brand of cigarettes as I do. MS, hard pack.

“Every so often, I take a passenger there.”

“Are you going there now?”

Maybe I can get him to drop me off right at the front door. I might not have enough money to get in, but at least I’d arrive in grand style.

“No, I have a call from a street that’s on the far side of that little village. You’ll have a good long walk ahead of you from where I’ll drop you off.”

“My name is Daniele. How about you, sir?”

I can’t say whether this exchange of names — one offered and the other requested — really has anything to do with good manners. Come to think of it, I think it’s a way of concealing the fear that washes over me every time I get into a car driven by a complete stranger, and to make it worse, at night, and worse yet, far from home, plus absolutely no one has the slightest idea of where I even am. Because there’s always a bit of fear, at the very least.

Possessing the name of my latest benefactor at least gives me the illusion of knowing, at least to some small extent, their identity and their intentions. Nonetheless, deep inside there’s always a part of me that’s quivering in alarm. Armando could pull over, reach into the driver’s side accessory pocket, extract a screwdriver, and plant it in my throat, just like that, without blinking an eye, and then bury me in any of the surrounding woods.

Meanwhile, the Kadett rolls past a sign that announces in black letters on a white background my destination: CASA DEL DIAVOLO.

“I’ll drop you off at the start of the next street.”

I get out and my breathing slows down to a normal rate. I’d been frightened, which happens to me all the time. All I have to do is loosen the reins on my mind, and things are sure to turn out well.

What a fool I am. Even if he’d had the worst intentions, I’d have fought him off. In fact, though, he was a perfectly nice person, like everyone else I’ve taken rides from so far.

Plus, he smoked MS, hard pack.

How bad could he be?

I walk toward the sound of a pounding, four-on-the-floor beat.

The air is filled with the Red Zone beat, so I do my best to head in the general direction of the music, but it doesn’t seem to be coming from anywhere specific. In fact the sound seems to shift around me incessantly. My destination is located on Via Fratelli Cervi. Easier said than done.

I see no lights, not even in the distance. The houses and the industrial sheds are all immersed in utter darkness, as are the roads. This place seems uninhabited.

Only the headlights of passing cars light up my surroundings; they zip by, with a whoosh of air. As I see them coming, I do my best to beseech a ride, but it’s seriously too dark. I open my suitcase and pull out the sweater I like best: navy blue, cotton. The night is getting chilly, the coolth reaches me in faint gusts from the meadow alongside me.

Right there, in the grass, at no more than a few yards’ distance, I glimpse something. It seems like a light. More than by fear, I’m frozen to the spot by terror. I squint my eyes, peering to see what’s there. The light reappears, followed by another light nearby. My eyes slowly grow accustomed, and a carpet of light spreads out, as far as my eyes can see, all the way to the distant trees.

My terror turns into wonder, astonishment, and enchantment.

I’d only ever even heard of this, if seen strictly in the cartoons.

A populace of fireflies dances at my feet.

A spectacle that leaves me speechless.

Light in the darkness.

Beauty must be experienced in real life. Any account of beauty, no matter how accurate, how skillfully woven, is insufficient to convey the joy one feels in the presence of certain visions, much less the gratitude that fills one’s eyes with tears.

Headlights in the distance. Artificial light conceals the microscopic glow of nature.

I stick out my thumb, and a split-second later I switch on my smile. A techno beat slows to a halt.

A Renault 5 pulls up.

“Are you going to the Red Zone?”

The carful bursts into a loud laugh issuing from multiple mouths. Their dialect is the same as mine. These are Romans.

The young man I’m talking to has long hair and haunted, staring eyes. His pupils are dilated, which means either cocaine or some other pills or tablets — by now I’m a dab hand at recognizing narcotics, starting with the distinctive effects they have on the eyes. I can see the three heads of the passengers in the back seat, but there’s not enough light to get a good look at their faces.

“Yo, where would we even put you? There’s five of us. But if you want, we can take your suitcase.”

Another blare of assholish laughter.

“Or else you can ride on the roof. But you’d better hold on tight!” The Renault 5 takes off again, tires screeching.

I watch them peel out for fifty feet or so, and then I go back to looking for fireflies. It’s going to take some time for my eyes to rehabituate to the darkness, to let them return to the fireflies’ dimension.

An engine comes sailing through the night air, snarling its way on a hurtling trajectory, drawing closer, and though I can hear it clearly nothing appears around me, no light, neither here nor anywhere.

The snarl turns into the screech of brakes.

I can’t figure out from where, though.

The roar of impact.

That’s what you get for going so fast.

A terrifying crash has just detonated into the air.

Then the noise of glass falling, crunching plastic.

I find myself bent over on my knees.

A light has appeared, pointing straight up into the night sky.

It must be five hundred yards away.

I start running in that direction, the suitcase slamming against my leg. I reach an intersection and turn right; a short distance later, I turn down a road on the left.

In the distance, a tangle of lights. My gasping breath starts to slow me down.

What I see now nails my feet to the asphalt.

In the middle of the road are two cars, utterly destroyed. Pieces of them scattered in all directions. The light pointing straight up is a headlight.

Not a voice to be heard. Not a moan.

I tear free one step after another.

The two cars must have crashed head-on. Of the car right in front what I can recognize is the rear hatchback. It’s a Peugeot 205 Rallye. There is nothing left of the other car’s front.

The two wrecks are about twenty yards away.

Behind me, I can hear someone braking to a halt.

Now there are two young men standing beside me.

One of them, the elder of the two, walks past us and continues toward the wreck. We follow behind.

The twisted sheet metal of the two cars seems to have been scorched, cauterized.

I ought to stop.

But I can’t help it.

This can’t be real.

Oh my God, cleanse my eyes of what I’m seeing right now.

Blood is supposed to stay inside your body.

A clumsy mannequin. Stripped of its soul.

An apartment house not far away lights up, a man in boxer shorts and undershirt, beside him an old woman in a dressing gown.

“WE’VE CALLED THE CARABINIERI AND AN AMBULANCE! DAMNED IDIOTS COME OUT HERE, DRIVING LIKE LUNATICS!”

The young man standing next to me seems to be struggling with some sort of mathematical reckoning, a terribly challenging equation. He can’t make himself see.

I wasn’t ready for this.