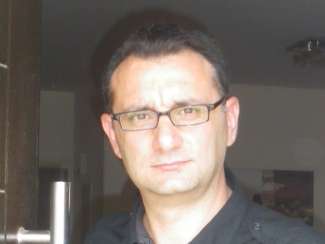 Emilios Solomou was born in 1971 in Nicosia and grew up in his native village of Potami. He studied history and archaeology at the University of Athens. He also studied journalism in Cyprus and worked as a journalist for a daily newspaper for some years. He is now a teacher of Greek and history in a public high school. In addition, he is a member of the editorial board of the literary magazine Anef, and he has served as a member of the executive board of the Union of Cyprus Writers.
For the novel An Axe in Your Hands (2007), he was awarded the Cyprus State Prize for Literature. His novel Like a Sparrow, Quickly You Passed… was translated recently and published in Bulgaria. Many of his short stories were published in literary magazines and some were translated into English and Bulgarian.

Hate is half of revenge (Publisher: Psychogios, 2015)

The diary of an infidelity (Publisher: Psychogios, 2012), EUPL

Hate is half of revenge (Publisher: Psychogios)

An axe in your hands (Anef, 2007), Cyprus State Prize for Literature

EUPL Year
2013
EUPL Country
Cyprus
Hμερολóγιο μιας απιστίας (The diary of an infidelity)
Yiorgos Doukarelis, an archaeologist and professor at the University of Athens, returns to an island in the Small Cyclades, Koufonisi, 20 years after the excavation that made him famous and changed his life forever. At that excavation, he discovered the prehistoric remains of a young pregnant woman murdered 5000 years ago. They gave her the name Kassiopi. During this trip, he had an affair with one of his students, Antigoni. They got married after Yiorgos’ divorce from his former wife Maria.
He returns to the island, six months after Antigoni disappeared mysteriously. The order and the routine of his daily life are destroyed. He is left with his memories and the only person close to him, his daughter Ismini. Going around the island, passing by the places he lived during the time of the excavation and meeting people from the past, he also wanders amongst his memories, exploring the secret ties that connect him with the three women of his life, moving from the present to the past. This is a second excavation for him, an excavation into the deepest places of his soul. He tries to remember and put in order all that happened during that summer which had a decisive impact on his life. In his fantasy, Doukarelis goes back to the prehistoric times of Kassiopi, recreating the story of the murdered pregnant young woman.
At the end, he learns that his wife Antigoni was found murdered, after being raped and kept for some time as a prisoner by a man. Doukarelis immediately leaves the island that connected him with the destiny of the three women who played such decisive roles in his life: Kassiopi, the mortal remains of the prehistoric past, Maria, the woman from the past, and Antigoni from the present.
This diary of an infidelity is also a novel about time, destruction, memory and love, which balances the present and the past. 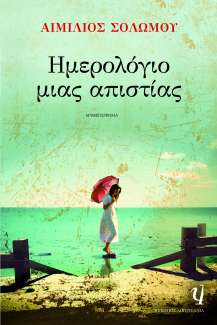 No sooner had she said it than they heard voices, and then shadows appeared flitting in the lamplight among the rocks, coming up the hillock to where they were. There were about twenty of them, mostly inquisitive islanders who had come up to see what was going on, what the mystery was that had revealed itself that evening in their neighbourhood. It would be too much to say that they were racing to get in touch with their roots, the human relic that had walked on this very turf thousands of years before. The constable was with them, with the village president Koukoulés in front: their natural leader, Mr President. He was a sly one, glancing first at Doukarelis and then at Antigone standing side by side next to the grave, rather than at the skeleton beneath their feet. They couldn’t hide from him, something was going on between them. He didn’t show much interest in their find. He was not moved by ancestry, such foibles were for people who fancy themselves and have their head in the clouds. The dead with the dead and the living with the living. If they would insist on disrupting a body’s sempiternal rest and confusing the living with the dead, then let them sort out the mess. The pupils of his tiny eyes were dilated and gave him a spooky look. Doukarelis felt them shining in the dark like two miniscule incandescent coals.
The constable couldn’t understand why they had been called out into the wilderness at this hour and Doukarelis explained to him that the excavation would have to be guarded tonight, their find was exceptionally significant, perhaps the only one to be found intact in the entire Cycladic civilization. The village president asked himself how remarkable a pile of bones could possibly be, they never guarded their cemetery, there were tens, hundreds of skeletons resting in those graves and as far as he knew, none of them had broken out all these years. It was apparent that he was the brains while the constable was the extension, the long arm of power...
All that evening the mist penetrated to his very bones. To escape it, he curled up under the tent. He felt dirty in his clothes, soaked in sweat and the night’s damp. Now and again he would close his tired eyes, but his worries kept him awake. He could hear the monotonous tick tock, tick tock, of his watch and he caught himself every so often counting the seconds.