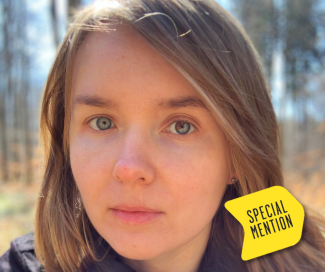 Eugenia Kuznetsova is a Ukrainian author, translator, and researcher. She was born and spent her childhood in the village of Khomutyntsi in central Ukraine. After graduating Kyiv National University, she received her PhD in literary analysis in Spain. Now, Eugenia works in media research, focusing on conflict-sensitive reporting and countering disinformation, and translates fiction and non-fiction. So far, Eugenia has published two books. Her first book Cook in Sorrow published in 2020. Her second book Ask Miechka was shortlisted for BBC News Ukraine Book of The Year in 2021. Now, she works on the monography on Soviet linguistic and identity policies and another novel. Both books are to be published in 2022.

The story of Ask Miechka features four generations of women seen over one summer. Two sisters, Mia and Lilia, come to their ‘shelter’ – an old house belonging to their grandmother, where they spent their childhood – in an attempt to put on hold their upcoming life-changing decisions: deciding whether to emigrate or stay; choosing between a reliable man or wild love. Their grandmother, Thea, is nearing the end of her life, and her daughter and the sisters’ mother are fearful of taking the place of the oldest woman in the family.

The old house, overgrown with weeds, shrubs and sprawling trees, seems to be frozen in time, lost in oblivion. Yet the sisters bring it back to life: new people come, new cats wander in, pumpkins are grown and the porch is renovated. The house changes, along with the lives of the women who inhabit it as the summer nears its end.

In her novel, Eugenia Kuznetsova tells a deeply intimate story about the relations between sisters, mothers and daughters. Vivid dialogues, in which the most sensitive things remain unspoken, but somehow felt, define the atmosphere of the story and highlight the unique ties existing between the generations of women in the family. 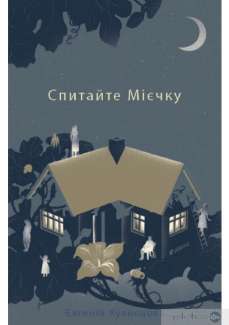 Translated from Ukrainian by Reilly Costigan-Humes and Isaac Wheeler

“Every living being has the right to shelter,” said Miechka, who was driving.

“To a shelter overrun by bushes,” replied her sister Lilichka.

Before they started talking, they were absolutely different. One’s hair was wavy, the other’s hair so straight it almost made her look Chinese. Miechka’s cheeks had a peachy shade to them, while Lilichka was pale, like she’d spent her whole life in a concrete bunker that never got any sunlight. Yet, as soon as the two sisters began speaking, a certain similarity emerged. With every word, their eyes, lips, ears, and movements blended together more and more up until whoever was conversing with them could close their eyes, shake their head, and say, “Who’s even talking?” Then they’d exchange a glance, fall silent for a moment, and then, once again, they’d become as different as night and day.

They came to the overgrown shelter for losers whenever they had no other choice. That didn’t require a tragedy of anything – at times, it just seemed like everything was foggy and the road ahead was obscured. That’s when it came time for the shelter. It was a structure with large, disproportionate windows, a faded floor, and a rotten deck overrun by bushes, raspberries, blackberries, barley, tall poplars, birches, wild plums, apples, and pears. They grew up amid those bushes, lost the battle to the thickets and overgrowth, and then left.

The shelter stood, reproaching the past for the fact that things there would never be like they used to be. Never again would all of us sleep in groups of three, never again would the men say “I’m going to sleep outside,” lie down on planks under the trees, and spend all night shaking off stray bats, cats, and insects with innumerable legs. All of those people scattered, died, or disappeared long ago, and the assorted junk bearing their names is the sole reminder of them. “Hand me Honcharov’s vase,” Grandma said. Nobody in the house had any idea who Honcharov was, but the vase was named after him.

Before the shelter, there used to be a house here. Then implacable time mashed it up, leaving behind the collapsed remains of a thatched roof, a barn full of chest-high piles of dirt, and a heart-warming ladder by a window for birds to perch on, yet no more birds, except for an occasional yellow oriole, were destined to sit there. Back in the day, Grandma’s husband brought her to this place, once he’d plucked her out of that fifth-floor apartment downtown and taken her away from her parents’ fig trees, library, and gold-embroidered tablecloth.

“Is this the paradise you were telling me about?” a young Theodora asked as she looked at the old barn and the remnants of a dilapidated house that had been obliterated by convulsions.

“This is it,” came the response, and she realized that she loved this voice so much that she didn’t need any fig trees whatsoever. Decades passed before every trace of the old house vanished and a new one matured and grew old with Theodora. Her children grew up here and then left; her grandchildren grew up here; her great-grandchildren played here. Now, Theodora, sneaking up on a hundred, sat on the rotten deck after she had fought her way down a path overrun by blueberries and waited for her refugee granddaughters who were heading toward her through the bushes. At first, they fled to the shelter due to existential anxieties over dead parrots and turtles. Then over professional crises, relationships, children. Here, Lilichka lulled her sons to sleep when, under regular circumstances, they drove her to the brink of insanity. At the shelter for losers, her children calmed down suddenly and simply crawled through thick patches of blueberries, scratching their tender bellies. Miechka would decide where to head next. At the shelter, ideas wouldn’t come to her, yet the realization that they eventually would did come. Here, you could come to terms with your lack of ideas as you sliced through impassable thickets.

“I shudder to think what people who don’t have a house overgrown with wild raspberries do,” Lilichka said once. She brought a pair of barely pink open-toed heels for Miechka to put on right away. Those heels had been up in the attic for about forty years; their grandma bought them way back when in Vilnius, but they didn’t quite fit her, so she never wore them, and she wasn’t aware that their time had come. Lilichka found them when she was cleaning the attic in a nervous fit. Who could have guessed that, forty years ago, her grandma bought heels that were the exact size of her two future granddaughters’ four feet?

“Granny’ll fall over when you step out of the car,” Lilichka said, eyeing her sister’s dress. Lilichka was certifiably beautiful. She was wearing dark glasses, a T-shirt with nothing underneath, and jeans with holes in them.

“And she’ll ask you why you can’t dress like your sister.” Miechka replied.

“She has no clue you wear that sack-of-potatoes dress most of the time,” Lilichka said, her glasses flashing in the rearview mirror.

After that, they stopped at a gas station. The first sweltering sun of that June shone bright; the strawberries of their childhood were ripening under the apple trees. Miechka took her suitcase out of the truck and produced a sky blue sarafan with white flowers on it.

“Put it on!” Miechka said, smiling. Lilichka opened one of the back doors of the car, swiftly slipped out of her T-shirt, and the sarafan slid softly as a wave from her shoulders down over her knees.

For the first time in eight years, things were such that they would need the whole summer to rehabilitate fully. They emailed all their husbands, boyfriends, ex-husbands, and all other interested parties and set a schedule for Lilichka’s kids.

“Remember how,” Miechka said, searching for a radio station with one hand and adjusting her dress sleeve with the other, “summer used to go on forever. Didn’t it?”

Lilichka simply nodded, holding the wheel with one hand for Miechka. With her other hand, she rubbed an apple on her knee, on the airy, blue wave of the sarafan that she’d just been gifted. That’s what they always did – whenever one of them had to adjust their straps, the other would take the wheel automatically.

They arrived in the early evening.