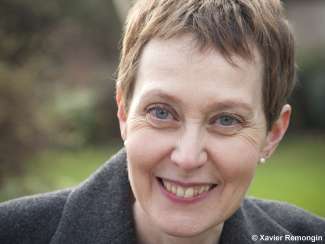 Having started out as a poet, Gaëlle Josse’s debut novel, Les heures silencieuses (The Quiet Hours) was published in 2011. It was followed by Nos vies désaccordées (Our Out of Tune Lives) in 2012 and Noces de neige (Snow Wedding) in 2013.

All three books won several prizes, including the 2013 Alain-Fournier Prize for Our Out of Tune Lives. The Quiet Hours has been translated into several languages, and a film adaptation of Snow Wedding is in progress. After several years in New Caledonia, Josse now lives and works in Paris. Le dernier gardien d’Ellis Island(The Last Guardian of Ellis Island) was awarded with the Grand Livre du Mois Literary Prize last autumn.

EUPL Year
2015
EUPL Country
France
Le dernier gardien d’Ellis Island (The Last Guardian of Ellis Island)
New York, 3 November 1954. In five days, the immigration station on Ellis Island, which all immigrants from Europe since 1892 have had to pass through, will close its doors. Alone in this huge deserted space, John Mitchell, an officer of the Bureau of Immigration, is both a watchman and a prisoner of this tiny island in the Hudson River facing Manhattan. A few days before he has to leave, Mitchell feels the need to free himself from the memory of several events in his life at Ellis, so he starts a diary. Until...

Two women, two boats, two stories that have left their mark on his life: Liz, his beloved wife, and Nella, the Sardinian immigrant with a strange past. Other ghosts emerge from that time of memory and soul-searching: Lazzarini, the Italian anarchist; Kovacs, the Hungarian writer, a communist dissident fleeing the regime in Budapest with his wife; Brian, the friend from his Brooklyn childhood, and many others.

Remorse, transgression, duty, loss, loneliness, exile… as well as emotion, love and sincerity: John Mitchell looks back over the course of his life and an era of North American history. 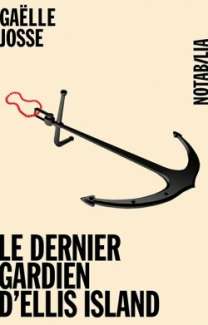 For 45 years - I’ve had the time to count them - I saw those men, those women, those children, in their dignity and confusion and in their most presentable clothing, with their perspiration, their fatigue, their absent gazes, struggling to comprehend a language of which they didn’t know a single word, their dreams set down in the midst of their baggage. Trunks of wood or metal, baskets, suitcases, bags, carpets, blankets, and within themselves all that remained of a former life, the one they had left behind, and that, not to forget it, they had to keep locked away deep in their hearts so as not to yield to the anguish of separation, to the pain of remembering faces they would never again see. They had to move on, adapt to another life, another language, new signals, new customs, new foods, a different climate. To learn, to learn quickly, and not to look back. I don’t know if for most of them the dream was realized or if they were brutally launched into a day-to-day life that was barely worth the one they had fled. Too late to think about it, there was no going back on their exile.

I remember the day, many years ago now, when the meaning of a few sentences, etched in my memory since childhood, was shown to me in an instant, as if an object one thought to be of no use, but which one kept in the bottom of one’s pocket without knowing why, had one day revealed its purpose.

By the rivers of Babylon, there we sat down, yea, we wept, when we remembered Zion.

We hanged our harps upon the willows in the midst thereof.

How shall we sing the LORD'S song in a strange land?

That psalm of exile came back to me with amazing precision and great suddenness, and I felt as if, in the middle of the night, I had stumbled against an obstacle in a hallway, and only then remembered it was there. The Sunday service, when I was a child. I still remember the voice of Reverend Hackson, his sparrow-like silhouette in a black robe, his halting gait, his convulsive gestures, and his diffident voice lodged deep in his chest, a bit more assertive with each phrase, until it became a flood, a swell that I thought each time would never end.