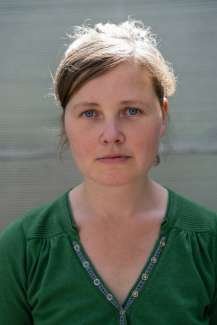 Gerda Blees, born in 1985, made her literary debut in 2017 with the short story collection Aan doodgaan dachten we niet (We Didn’t Think About Dying). Her first volume of poetry, Dwaallichten (Wandering Lights), appeared the following year. We Are Light is her first novel and received unanimous rave reviews from the Dutch press. It was awarded the Dutch Booksellers’ Award for 2021 and has been nominated for the prestigious Libris Literature Prize.

EUPL Year
2021
EUPL Country
the Netherlands
Wij zijn licht (We Are Light)
Four members of a commune stop eating because they have decided that, from now on, they want to live on light and air. The characters in Gerda Blees’ novel each have their own reasons for this extreme decision, which ends up costing the protagonist, Elisabeth, her life. This magnificent story is loosely based on true events. Each of the 25 chapters opens with the words ‘We are …’ and is told by a different narrator, including Elisabeth’s parents and siblings, her neighbours, her sister’s lawyer, the night, the daily bread, the scent of an orange, dementia, doubt and Elisabeth’s own body. Each narrator has a unique and distinct voice and makes an essential contribution to the novel’s complex tapestry. 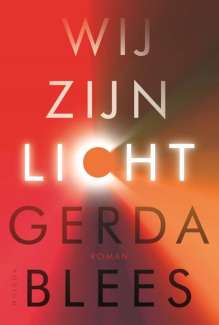 Translated from Dutch by Michele Hutchison

We are the night. We bring darkness, drunkenness, cat fights, sleep, sleeplessness, sex and death. People wanting to die in peace, without fuss or ado, often choose to do so in our – the night’s – company, while the about-to-be-bereaved slumber on. In this country, many cancer patients, people with heart and lung disease, and the exhausted elderly, breathe their last breath, almost unnoticed, at night. But we are no strangers to less peaceful ways of dying: fights, traffic accidents, murder and manslaughter. You wouldn’t want to know about the awful things we’ve witnessed, not even if you like horror films and have a strong stomach, and we don’t want to talk about it either. There are more interesting ways for people to die, like the woman who has our attention at the present moment. In her case, the recognizable elements of a peaceful death coincide with disturbingly abnormal circumstances.

Recognizable: a sitting room with 1990s furniture, tasteless ornaments on the wall – large colourful metal butterflies, old musical instruments of varying sizes – and in this room, a sleeping woman with wispy grey hair, so thin and weak that her heart could give out at any moment. Next to her a relative, her sister judging from the shape of her face, clasping both hands in her own as though she’s trying to keep this near-dead human alive.

Abnormal: everything else, but particularly the fact that the sisters are lying on inflatable beds in the middle of the room, and the presence of the other people: a middle-aged man and a somewhat younger woman, watching from a red sofa. They have almost as little flesh on their bones as the dying woman; their cheeks have caved in, their eyes are sunk deep in their sockets. Although they don’t appear to be on the brink of death, we can see their skeletons jutting through their skin. And the way they are breathing, as though they are afraid of taking in too much oxygen at once, tells us that they may not be dead, but they are not entirely alive either. Maybe that’s why they are sitting there with the windows closed, in the stuffy heat of the past summer’s day, and they haven’t switched on the lights so that only a thin orange beam from a street light in front of the window falls through the curtains into the room, cutting diagonally across the beds of the two recumbent women.

We’ve seen these airbeds here before. Usually there are four of them. The dying woman, her sister, and the two other people all sleep next to each other on the floor on them. Not much else happens. They’re no night owls, aside from the woman on the sofa, who often lies staring up at the ceiling, eyes wide open, her stomach making rumbling, churning noises beneath her fleece blanket. From time to time, a grimace appears on her face. She balls her fists. She bites her knuckles. She sucks on her bottom lip. Sometimes she falls asleep after a couple of hours anyway, but often she crawls out quietly from under her blanket and creeps to the toilet to drink some water from the tap, repeating this every hour or so.

We get the impression she’s hungry, but we’ve never been able to catch her taking a nocturnal trip to the fridge, unlike a lot of people who can’t sleep due to the gurgling emptiness in their bellies. In the three years we’ve seen her like this, we’ve only seen her in the kitchen once. She stood in front of the slow juicer for a long time, stroking its side as though it were a gentle, sweet pet, and then she kneeled at the fridge, pressing her forehead to its door. She sat there for more than an hour without moving. Then she rested her fingers on the handle. We saw the muscles and tendons of her hand tense as she squeezed with all her might. Her elbow lifted slightly, and she let go. She stood up. Faltered. Grabbed the worktop. Leaned forward, head between her knees. Straightened up again, slower now. She took a step. Her eyes roved around the colourless darkness and then paused at an apple in the fruit bowl on the counter. She went over to it but didn’t pick it up. She leaned forward, brought her nose right up to it and stared at the apple.

If we’d have been able to speak we would have shouted at her, ‘Eat then, woman, eat! Nobody’s stopping you.’ But she didn’t eat. When she managed to pry herself away from the apple and tiptoe back to the sitting room, she came upon the oldest of the four, the dying one, awake, eyes open. She stood there, startled, caught in her housemate’s gaze, a gaze that was expressionless: neither recognition, nor disapproval, nor reassurance. Nothing. And in the same expressionless manner, the staring eyes closed again. Our hungry friend let her shoulders sink, slowly continued on her way, and laid back down on her airbed, waiting for day to break.

As the earth’s night, we are not easily unsettled, but this we do find remarkable – that people in a country such as this would voluntarily suffer from hunger, with food literally within hand’s reach. As though wanting to protest against the abundance given to them.

And now death has arrived in hunger’s wake, not for our chronic insomniac, but for her housemate.

‘She’s gone,’ says the sister, sitting upright on her airbed now, still clutching the dead woman’s hands. ‘I felt her pass… it was so smooth, so beautiful. Really special, don’t you think?’

She looks at the other two, her eyes enquiring. They are breathing even more cautiously than earlier. ‘Did you see that? Did you see how calm she became when I took her hands? She could finally let go… let herself go. Beautiful that it happened like that, right? That we didn’t try to hold her back. Right? Petrus? Muriel?’

Petrus and Muriel don’t move a muscle. Their faces are still drawn as their eyes dart around, searching for something they can’t find in the shadowy darkness. Finally Muriel says, ‘Beautiful, yes.’

‘What about you, Petrus? What are you feeling now? Anything to share?’

Petrus closes his eyes and shakes his head as though plagued by an insect that he daren’t slap away. His forehead is shiny with sweat.

‘Never mind,’ the sister says. ‘It’s difficult to truly open up to everything you’re feeling at such an intense moment. It’s difficult, I understand that, really I do.’

Without saying anything, Petrus gets up from the sofa, opens the back door and goes into the garden.

‘Alright, Petrus,’ the sister says, and to Muriel: ‘It’s OK. Just denial. Doesn’t matter. It’ll all come later. Elisabeth is the most important person now. Can you pass me the phone? And the GP’s number? I think it’s better if I stay with her a while. I think she’d appreciate that.’

Muriel gets up, goes to a rucksack in the corner of the room, takes out a mobile phone and gives it to the sister. ‘Just have to look up the number.’ She sits down at the table and opens a laptop.

‘That’s kind of you, Muriel,’ the sister says. ‘Very kind. It’s lovely that we’re together, that we were all together with Elisabeth. She must have felt it. She is feeling it. Because I can sense she’s still in the room. Can’t you?’

‘That she’s still with us: Elisabeth. Actually I can feel her presence quite strongly. But of course I am her sister.’

Muriel squeezes her eyes shut and frowns. Then she opens her eyes. The blue-white light of the laptop makes her face appear even more ghostly. ‘Yes,’ she says, ‘yes, I can feel her too, yes.’ She nods at Elisabeth’s body and looks at the screen again. ‘It says here to call the out-of-hours service at night.’ She begins to read out numbers and the sister types them into the mobile phone.

From here we fast-forward a bit, analogous to the experience of anyone who has stayed awake all night – at first the time goes slowly but then it is suddenly morning.

A discussion unfolds with the out-of-hours’ receptionist. The receptionist says she’ll send the duty doctor, but Melodie thinks it would be better if her own GP came to certify the death because this was an unusual case, her sister, in terms of her medical file, but also because of the emotional bond, and if their own GP really can’t come, it’s important that the duty doctor reads the whole case file, and on the other end of the line, we see the receptionist roll her eyes and then ask Melodie in an extremely friendly tone whether she can briefly tell her how exactly her sister died, and Melodie says it was all very beautiful because Elisabeth was able to let go at last, because life had been a battle for her, and as the receptionist says, ‘hm, hm,’ and ‘yes,’ she glances at the patient’s date of birth and types up something about a muddled story and ‘possible suicide?’ and then she says to Melodie that unfortunately the duty doctor will have to come and he won’t have access to the medical file, but that she can count on his professionalism, and all in all Melodie finds this a cold way of going about things, an impersonal system in which rules matter more than people, but the receptionist doesn’t have time to hear Melodie out, the lights are flashing for other incoming calls, so she says goodbye in a firm but friendly voice, hangs up and completes her notes for the doctor who will come to examine Elisabeth van Hellingen’s body.