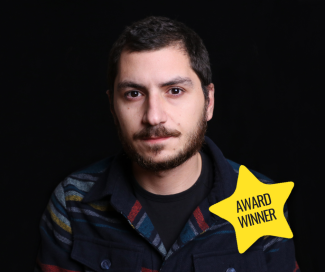 Iva Pezuashvili is a contemporary Georgian writer and screenwriter. Born in 1990, Iva’s writing career kicked off in 2014, when his debut book of short stories I Tried was published by Intelekti. His short story Tsa was one of 10 short stories by Georgian writers published in 2018 by British publishers Comma Press in the collection The Book of Tbilisi, and one of seven short stories in the collection Georgien - Eine literarische Einladung (Literature Invitation to Georgia) by German publishers Klaus Wagenbach. In 2018 he won a scholarship for the international writing program at the University of Iowa, United States, followed by a residency at Residencia Literaria 1863 in La Coruña, Spain. In 2018 his first novel, Gospel of the Underground, was published by Intelekti, and it was shortlisted for every one of the country’s major literature awards. With his last novel, A garbage chute, Iva won the EUPL 2022, as well as other literary awards, including the Tsinandali Award for best prose, and in 2021 he won the Special Jury Prize of the SABA award.

A graduate of the Feature Film Department of Shota Rustaveli Cinema and Theatre University, Iva is also the author of several TV series and films in Georgia. In 2011, Iva won the Autumn Legend, the student literature competition, with his short story Alchu (Lucky Toss). Based on this short story, he shot his first movie, Babazi. Among others, he also worked as a screenwriter and director for one of Georgia’s most popular film series Tiflis between 2014 and 2016.

Milla, who has lost hope for her husband Genna, is planning her future without him. Their daughter, Zemma, who is working in the police system, decides that revenge is the only purpose she will ever serve. Lazare, the youngest member of the family, who follows left-wing ideals, is suddenly forced to give up on his principles.

The new novel from Iva Pezuashvili is a saga about a Simonian family that flees from the war in Karabakh to Tbilisi, a city of corruption, violence and dirty politics. The story develops in the space of 24 hours, with all the conflicts, drama and challenges pouring down on the family at the same time. On the top of this, demons and people from the past start to awaken once again, reminding Genna that if something rotten is buried deep below, there is no chance of a bright future. 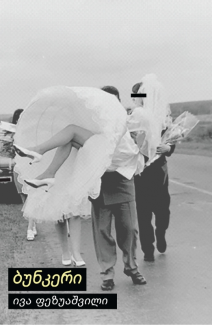 Translated from Georgian by Tamar Japaridze

The power was back early in the morning, at about six am. Milla turned on the heaters, and when the apartment became more or less warm, she pulled poor Zemma out of bed to wash the two-week greasy dirt from her head, first with washing soap and then with Кря-кря  shampoo (Russ. Kid shampoo ‘Quack-Quack’). When the girl had washed her hair, dried it, braided it, and breakfasted on toast soaked in salt water, Milla sent her off to school and set about filling the tub for her son, who wasn’t yet called Lazare. It was a very smart move – firstly, because the boy loved to splash in the water, and secondly, because in the event of a water outage, which seemed to be one of the favorite pastimes of the democratic government of Georgia after blackouts and gas outages, she would have a supply of water to flush the toilet. Satisfied with her perspicacity, she heated the water with a spiral tube heater, put her half-asleep son into the tub, soaped him well, rinsed the foam down with clean water, filled the tub with toys and went to the kitchen to fill the twenty-liter and five-liter tanks with drinking water. Just at that moment, Genna, who was always pale, unemotional and tired to the bone, came home. His eyes were sparkling strangely, and he was so full of energy that he instantly took his wife into his arms, rushed her to the kitchen, laid her on the table, took off her sweater and T-shirt, tore off her bra, sweatpants and ripped stockings, and began to kiss her with oblivion, just like years ago, just like before fleeing Baku, before fleeing Yerevan, before fleeing himself, and before Samuel's death. He kissed her a lot, and everywhere, and passionately; he caressed her and whispered in her ear how he had always loved her and always would, and asked her forgiveness for being unable or unwilling to express his feelings at times. Now he felt that everything had changed, that his strength had returned to him, and he would become significant. He said that every routine was hell, but there were hellish routines and one of them was Georgia… But even in Georgian hell his sun would rise, as the night before he had saved the President from death! He said that he and the Minister of  Interior Affairs hadn’t slept a wink, and that all the high officials of the ruling party and the entire cabinet of ministers thanked him, and all of them, together and individually, promised him the stars and the moon for his heroism, and that soon the time would come when he would be able to fulfill Milla's every wish, when he would give her everything she deserved; that the time would come when he would start to appreciate himself again, and so would others; that he would achieve a lot, and that he would make his wife happy, and that eternal happiness awaited her. And Milla smiled at him and answered him with groans of lust, and her groans were accompanied by the babble of Lazare, who had left the bathroom. When the moans grew into rapid heartbeats, Genna began to howl, praising God, earthly Paradise, beautiful Iveria (Iveria – the old name of Georgia),  Brotherhood, Unity, Freedom; he praised the homeland that he had lost and which would not accept him back, so now he would take Georgia for his homeland and it would be his fetish. And if Georgia became a fetish, if it was a fetish to lose the truth, and if to live without truth was routine, and routine was hell – then everything that turned into routine was already hell! But Genna still howled, praising the great goals in life! Long Live Love! Long Live Relief and Joy! Welcome Dawn! … And finally, he ejaculated, a release from words, praises and howling… Now only the rapid heartbeats of the happy couple were heard in the kitchen, but the child's babble was no longer audible... When the silence from the bathroom seemed too long and unbearable, Genna jumped to his feet and rushed to the bathroom. He found his son half-dead and blue in face, with lungs full of water, and tried desperately for three or four minutes to bring him back to life ... And when by some miracle he saved him, when the child eagerly inhaled the air and returned to life, Genna returned to his usual inertness, locked himself up at home, and announced:

"Самвел имя проклятое и надо его поменять." (Russ. -  Samuel is a cursed name and we need to change it.)

Milla remembers all this. She knows that if not that unfortunate incident with the child, Genna would move mountains, he would definitely change, he would do everything possible and impossible and achieve success if he had been lucky that once, but ...

Well, what’s happened, happened, and Genna is what he is.