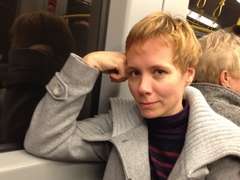 Jana Beňová (b.1974), is a poet and prose writer, who graduated from the Academy of Music and Dramatic Arts in Bratislava (1993-1998) with a degree in theatre dramaturgy. At first, she wrote for the the publications Dotyky, Fragment and Slovenské Pohľady. Then she worked as a journalist for the daily newspaper SME, writing under the name Jana Parkrová. Currently, she is employed as an editor in the Theatre Institute in Bratislava.

In the spring of 2008, the L.C.A. publishing house published Plán odprevádzania (Seeing People Off), subtitled Café Hyena. Her novel Preč! Preč! (Get off! Get off!) is marked by her original humour and ease of expression – precise, lively and spontaneous.

EUPL Year
2012
EUPL Country
Slovakia
Café Hyena (Plán odprevádzania) (Café Hyena (Seeing People Off))
Seeing People Off (Café Hyena) is a novel, an unusual mosaic of observations, perceptions, self-reflections and memories. Two couples sharing a strange grant that allows them to live however they want. With some peculiarities. Its heroine Elza lives in a huge apartment building in the borough of Petržalka. Where all the walls play music and talk. And where time is immaterial. Here you can find creatures the rest of the world believes no longer exist, are extinct. The love story of Elza and Ian. Bratislava desperadoes not employed by an advertising agency, who have instead joined the carefree class of people who buy only what can be peed or pooped out or exhaled – recycled within twenty-four hours. Seeing people off means trying to protect them, to share the journey even when it leads to madness or death. 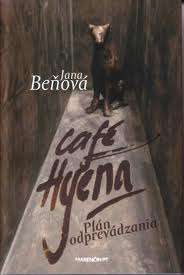 Elza:  Together we ate grapes and washed them down with rosé. The next day I discovered a damp grape stalk in my pocket. It looked like an Christmas tree, upside-down .

Kalisto Tanzi disappeared from the town, which was gripped by a heat wave. The heat radiating from the houses and streets burned people's faces and the scorching town seared its mark on their foreheads.

I stopped in front of the theatre's display case so I could read Kalisto's name on the posters and reassure myself that he actually did exist. I derive pleasure from uttering the name that had tormented him throughout childhood and puberty and only really stopped annoying him after my arrival.  I slowly walk to the other end of the town, the muscles in my legs tingling slightly in the hot air. It is noon. Drops of perspiration are the only thing really moving on this planet. They run down to the bridge of my nose and spurt out again from under my hair.

Yesterday Ian saw a rat in the lavatory.

The rat-catcher has a wine cellar under his shop. We go underground to escape the unbearable heat and sip wine. He tells me how intelligent rats are.

"They have a taster, who is first to try the food. If he dies, the others won't even touch the bait. That's why we use second generation baits. The rat begins to die only four days after consuming the poison. It dies as a result of internal bleeding. Even Seneca claimed that such a death is painless. The rest of the rats get the impression that their comrade has died a natural death. But even so – if several of them die in a short time, they decide the locality is unfavourable on account of the high mortality rate and they move elsewhere. Some people and even whole nations completely lack this ability to assess a situation."