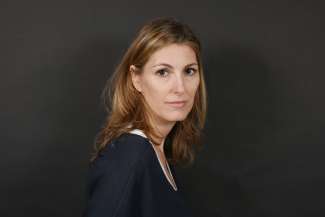 Nathalie Skowronek was born in Brussels in 1973. After studying literature, she worked in publishing before going into women’s fashion for 7 years. She returned to literature in 2004, when she created the editor collection La Plume et le Pinceau for the publishing house Complexe. At the age of 37, she published her first novel, Karen et moi (Arléa, 2011), the first volume of a family trilogy which takes the reader from the Polish shtetls on the road to Auschwitz. Two novels, Max, en apparence (Arléa, 2013) and Un monde sur mesure (Grasset, 2017), followed. In 2015, she published an essay entitled La Shoah de Monsieur Durand (Gallimard,2015), in which she shows that duty of remembrance ceases to operate after 70 years. Since 2016, she has been teaching in the Contemporary Writing Centre of La Cambre/École nationale supérieure des arts visuels. She also facilitates a writing workshop for the Antonin Artaud Club, a day centre for adults with psychological disabilities.

EUPL Year
2020
EUPL Country
Belgium
La carte des regrets (The Map of Regrets)
Suicide, murder, accident? The circumstances of Véronique Verbruggen’s death on a trail in the Cévennes would not have occupied more than a few lines in the press if the victim had not been a well-known publisher. Questioning and sharing the same grief are two men: Daniel Meyer, her ophthalmologist husband, and Titus Séguier, her lover and a filmmaker, forever doomed to wait for Véronique to finally leave her husband. To Daniel, nothing has ever disturbed the 20 years of living together with his wife, whom he loves unfailingly. The lovesick Titus hesitates between remaining silent or addressing a cinematographic love letter to Véronique by finishing the project they started together before she disappeared. Beyond varnished appearances lurks an upsetting portrait of a woman who could not choose. Nathalie Skowronek explores with great subtlety the different facets of love and how, even if times are changing, the drawing and quartering of the heart remains. 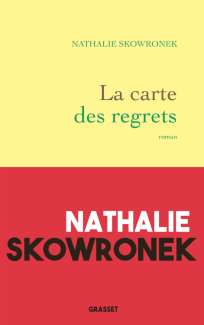 Translated from French by Jeffrey Zuckerman

The name Veronica is supposed to have arisen by mistake and ignorance, being probably derived from vera icon… true image.

The article raised far more questions than it answered. It was, by all accounts, a matter of love. Véronique Verbruggen was being mourned, and yet the details of who loved who, of who was loved by who, didn’t add up. The article mentioned a memorial for the dearly departed. Those who had known and loved Véronique Verbruggen were apparently welcome, and yet Titus Séguier seemed disinclined to leave his home in Finiels, a hamlet on the slopes of Mont Lozère, to pay his respects. Come hell or high water, he swore to the reporter before cutting the conversation short, he would never let this woman down.

This woman, the director of a small publishing house, was a matter of far less ambiguity. Her longtime confidante, the Italian ceramicist Francesca Orsini, alluded to her reserved personality, to the professionalism, receptiveness, and attentiveness that had been essential to the Éditions du Pont, a publishing house with an exacting list that elevated unfairly forgotten artists. Véronique Verbruggen specialised in monographs on minor masters of painting whose fate had been to cross paths with the medium’s shining lights, and as a result to remain bit players on the grand stage of art history. The few times that their canvases did reemerge from obscurity, it was to add historical color in a magazine — people often reached out to Véronique for that reason — but without any presumption of actual artistic value. Véronique’s close acquaintances, a close-knit group that often made its way up to her top-floor office in an old building on Paris’s rue Cassette, bore witness to this forty-three-year-old director’s devotion; it was a struggle for her to stand up and straighten out the hunched-over curves of her willowy, nearly six-foot frame. It was really something to see her take to the bully pulpit for the books she most cared about. Only the occasional rumor hinted at just how precarious her business was, just how many times it had nearly gone under, just how miraculously she had kept it on steady footing.

The article only had one rather poor photo. Barely visible was the sober and elegant VV that emblematized the publishing house but conveyed no useful information here. Picturing Véronique was simply a matter of entering her name into any search engine. Under the “images” tab was an angular face with high cheekbones, green and almond-shaped eyes, close-cropped chestnut hair. None of these portraits did justice to the publisher’s beauty, “a lunar beauty,” as Francesca had once put it, an adjective that was almost meaningless, unless it was how Véronique exuded a singular, almost icy radiance not unlike those Flemish painters in which she took such interest.

What can we know of the lives of those around us? What can they show us of themselves, and what can they hide? Mina, her twenty-one-year-old daughter, who had slipped deftly from adolescence into a prestigious piano program at a music conservatory, had chosen her words carefully, her lines likely rewritten by the reporter: “My mother had a particular way of working, loving, playing by the rules, breaking them. My hope is to uphold as faithfully as I can the example she set.” But what could Mina know of her mother?

Véronique’s lifeless body was found by a day hiker one May afternoon. The man had set out from a hotel in Villefort with a restaurant where Véronique, by sheer coincidence, often took her lunch. He was about to cross the Rabusat pass across the GR70, which was also called the Stevenson Path, when he stopped to catch his breath. A signpost showed that he was now 1099 meters up; the news so delighted him that he took a picture of the plaque with his cell phone. Because there was no network, the image hadn’t gone through to his partner. The man’s breath was halting as he looked all around.

The farther the hiker went, the more he felt like he was becoming one with the landscape. The profile the peak cut was a beautiful one. Apart from the tinkling of cowbells, there was no sound of civilisation to be heard. The birds’ song lulled him. He reveled in listening to the leaves’ rustle, in telling apart the various trees, in tracking the pair of iridescent butterflies that his arrival had sent fluttering, in watching a small bird of prey take wing. His ears buzzed. Was it the altitude? It was entirely possible this could have just been a sensation of fullness. In the distance he could make out tall grasses bending under the wind, heaps of rocks that looked rather like flocks of sheep, hazy and bluish summits. Not for a minute did he suspect that in just a few hours he would be recounting this entire day to a cub reporter at Le Midi Libre. In this liminal moment, he thought about how it had been years since he had felt so free, so light.

His pace was steady, branches snapped under his feet when he decided to go off-trail to gather some arnicas. Propelled by a renewed burst of energy, the hiker had to remember to look where he was putting his feet on the increasingly steep terrain. He kept checking his bearings, steadying himself here and there by a bush, a copse of broom. This exertion delighted him. And then the man stopped dead in his tracks. He stifled a shriek, an icy shiver ran down his body. He suddenly wished he’d never ventured out in the first place. His sights were now set not skyward but down toward the valley. He was looking for a road, an actual one, with asphalt and cars. The day had turned ghastly and sad. Ghastly for the hiker, ghastly for those who had known and loved Véronique Verbruggen.