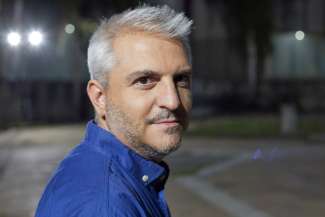 Vladimir Jankovski (1977) has graduated General and Comparative literature at the Faculty of Philology „Blaze Koneski“ in Skopje. He worked as an editor in several publishing houses. He has published 3 novels: Hidden Desires, Restless Travels (2020), Invisible Loves (2015), and Eternal Present Time (2010). For the novel Hidden Desires, Unrest Travels he was awarded with the “Novel of the Year award” and for Invisible Loves he was awarded with “Racinovo Priznanie award” for the best prose book. Hidden Desires, Restless Travels and Invisible Loves were representatives of Republic of North Macedonian for international “Balkanika” award. He is active in the field of literary translations. For the translation of the novella The Penelopiad by Margaret Atwood he was awarded with “Zlatno pero”, award given by the Association of literary translators of North Macedonia.

EUPL Year
2022
EUPL Country
North Macedonia
Hidden Desires, Restless Travels
“Hidden Desires, Restless Travels” is a mosaic novel in which the stories of fifty people from different geographical meridians intersect with the stories of the four characters based in Skopje, North Macedonia. The book is a mix of stories, intertwined among themselves, pictured in details, with specific atmosphere. This is a novel about the interaction between the personal and the external, about the way the atmosphere and situations shape our inner landscapes, about the need to tell stories and find the glow and the lie in them. The combination of an unbiassed camera view and personally colored storytelling creates an unusual tone, which causes the reader to be left in front of the open door of interpretation. Thematically, the book deals with some of the dominant themes in modern society: the relationship between the real and the virtual, the question of professional success and success in the art world, the relationship between external success and the search for oneself that has one form on the outside and another on the inside. 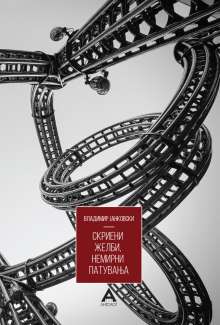 Translated from Macedonian by Christina Kramer

Martin half closes his eyes to catch the scent of the woman standing in front of him in the elevator more intensely.

The elevator has another four floors to descend.

He breathes in deeply the scent emanating from her body.

The next moment the elevator door opens, the woman steps out briskly.

She will disappear into the city forever, turned into a memory of a possible intersection.

Martin will never know her name, her profession, or her obsessions.

Her name is Anastasija Dimeska, a 43-year old pharmacist. She doesn’t much like her work. A younger sister in a family of doctors. As a teenager she was secretly obsessed with the most repulsive children in their neighbourhood. She’s been living for three years with Alex, a real-estate agent and an Italian football fanatic. Anastasija doesn’t like anything in a fanatical way. She thinks of herself as someone who knows how to give the right weight to things. The true one.  In her imagination she answers questions to made-up interviews. She is sad about: the fact that she can’t live various lives simultaneously. Her desire: to choose a life in the morning the way people choose what clothes to wear. When she’s in front of a mirror: she takes pleasure in the face looking back at her.

Pavel sits on one of the metal chairs and studies the names of the cities on the screen. In the chair opposite him an Asian woman is scrolling on her tablet, staring with almost no distance between her eyes and the screen. Next to her, her friend, or merely a traveling companion, is attentively studying the faces of the people who come into the waiting area from airport security. She is focused on their faces, their movements; she studies them as if she’ll find in them an answer to a question she asked a long time ago.

An abundance of the moment. That is how Pavel would describe this situation where so many people are funneling through the warm gorge of the airport.

Pavel continues to look around absently, he’s not someone whose gaze can be held for long in one place. He studies the people sitting there and the majority of them stare fixedly at their telephones logged on to the most popular social media. They stare at the banality of other people’s lives.

The airport is a mill of thousands of people’s lives, which, over the course of the next several hours, will draw closer, will pass through a collective sieve, and then, once sifted to the other side, will disperse in all directions. It would be a true miracle if some of those stories, unfolding through the mediation of this non-place with its standardized features, were to intersect again. For Pavel, this non-intersection has always been liberating.

Suddenly, the girl sitting next to tablet-girl stands up, makes a slow circle around the waiting area, an activity typical for this situation, and stops in front of him. That is the first atypical thing thus far.

“Excuse me, may I ask you something,” she says in well-rehearsed English.

“Yeah, sure,” his English more casual in tone.

“Can you tell me your story?”

“Your story. In several sentences. Not more than ten.”

The look on Pavel’s face says that he needs more of an explanation. The unknown woman understands the meaning of that look. She seems like a person quite well rehearsed in understanding the needs of other people. So from an inside coat pocket, she takes out a cell phone which will serve as an audio recorder. Each of her movements is in harmony with the information that follows.

“People usually ask me to give them an explanation. I tell them that whenever I can, I take a trip outside of my native country, I was born in Sweden. On these trips I record randomly selected people. That is, of course, if they agree. I record them telling one of their stories. About themselves, about someone close to them, about something that intrigues them. First, they just provide their first and last names, and the city they come from, I ask some of them their age… but that isn’t necessary. That’s what I do – I collect their stories about themselves. Would it bother you if you told me yours? Would it bother you if I record you?

He looks at the Asian Swede.

Love the moment, be good to it, indulge in it, and expect nothing in return.

“I’ll do what you’re asking, but in my language, in Macedonian. I am Pavel Firfov from Skopje, Macedonia. A country in Europe, or more precisely in Southeastern Europe, I don’t know if you’ve ever heard of it or been …

The voice over the loudspeakers announces the boarding of the flight to Istanbul, Pavel’s flight.

“Are you also going to Istanbul?”

“So that means I have less than two minutes to tell you what you’re asking?”

The girl moves the cell phone towards Pavel.

David is lying on the bed in his room observing the ceiling on which, before he was born, his mother painted a sky with girls in wide dresses flying towards it, but instead of arms they have fish fins. He has been looking at this ceiling for years without it becoming boring or wishing to repaint it.

Beside him, there’s an instrument lying on the orange bed. His left hand is gently touching its varnished body.

He is twenty-two years old and tomorrow is one of the most important days of his life; the concert which will determine what will happen to him and to his instrument.

On the street the city angrily lashes the faces of its residents. It does this with the sounds it produces, the views it creates, the air the people are forced to breathe.

Martin stops in front of the business centre taking the city’s harsh blows. He’s well acquainted with them, and what’s more, he likes them. Lately, this is the only way he can endure the city – through its cruelty.

At this moment, however, what is enduring on Martin’s face is the trace scent of the woman in the elevator.

Urška Lovrenc from Novo Mesto, Slovenia: biography in one sentence, in the second person

You’re the one who thinks that we each carry inside ourselves a little weirdo, and life turns to grief when we allow that weirdo inside us to sleep too often.

Bistra sends the overview in an Excel file which she worked on all morning and looks at the large office window.

The night rain, in collaboration with the dust on the glass, has drawn an image: a woman with five heads.

She gets up from her chair, the office is empty; her colleagues are on break. She glues her head to the cold glass. Hers is the sixth head. Or she has become a woman with six heads.

The city below is quiet and capricious, a spoiled lover with no clear idea how he wants the night to end.

With her index finger, Bistra traces a sentence on the cold body of the glass.

No one will ever read this sentence.

That doesn’t bother her, she isn’t someone who wants to leave traces, to be remembered, to be thought about.