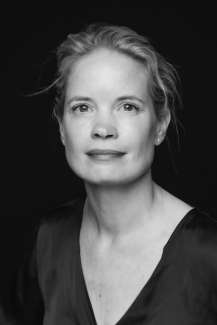 Kjersti Anfinnsen, born in 1975, lives in Oslo where she works as a dentist. She has studied creative writing at the Tromsø Academy of Contemporary Art and at the Writing Academy in Bergen. In 2012, she made her debut with the novel Det var grønt (It Was Green). The novel De siste kjærtegn (The Last Signs of Love) was published in 2019 and has been translated into Russian and Danish. Anfinnsen has received several awards and author grants. In 2021, her third novel, Øyeblikk for evigheten (Moments for Eternity), is an independent sequel to The Last Signs of Love.
EUPL Year
2022
EUPL Country
Norway
Øyeblikk for evigheten (Moments for eternity)
Birgitte Solheim is a cardiologist who has turned 90 years old – so old that most of her friends are dead. Lonely and frail, she spends most of her time in her apartment in Paris. Behind her, she has a long career in a male-dominated environment, and she has never prioritized having a family on her own. Now she is trying to reconcile with life, while observing people and the world. With wisdom, experiences, drive and humor, she does not give up her dream of love. Øyeblikk for evigheten (“Moments for Eternity” is a tender, bitter and surprisingly funny novel about loneliness, love and death. Who are you when you're old? Are you just a representative of a certain age? 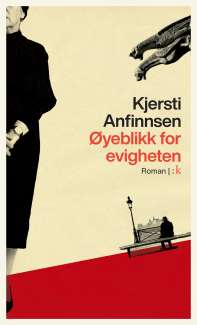 Translated from Norwegian by Kari Dickson

We cling to our chairs in much the same way that we cling on to life. I, rather stupidly, have accepted an invitation from Oslo University Hospital to receive an award. I blame Javiér in part, he was so charmingly persuasive. He felt I deserved the attention. In our enthusiasm, we forgot how decrepit we are, and off we went, as we promised each other we would, only to discover, to our surprise, that age has a firm hold on us.

And now we don’t dare leave the hotel room. We might not find our way back. It’s fatally slippery outside. And very cold. So we stay lodged in our chairs, wrapped in a duvet, and look out of the window while we wait to be collected. Well, that’s to say, Javiér has fallen asleep and I see practically nothing.

My sister has sent me her best pieces of clothing, neatly ironed and folded in a post office box. She spent the last year of her life tidying, sorting and storing, but didn’t throw anything away. Elisabeth never binned anything. I can just picture her rummaging through her cupboards and drawers. Bustling movements, as though she were busy.

She still manages to plague me.

But it’s probably me there’s something wrong with, I mean: she’s dead, and I’m still annoyed.

Uppermost in the box is a coat. I lift it up by the collar and draw in the smell of my sister. Oh yes, that’s my little sister.

‘Chanel and fried onions,’ she says.

I put the coat on. And vanish in its capacious folds.

Michel M is ill. Seems there’s a bug going around. I have to make my own dinner. To read the recipe, I need a good light and my strongest magnifying glass. I normally keep it in the middle drawer of the bureau in the sitting room. But it’s not there now. I can’t remember when I last used it. Yesterday, no doubt.  Goodness, it’s vitally important to put things back in the right place. Forgetfulness is like a slap on the face, huge parts of the memory collapse, and you can’t remember anything except that you are terribly old. I may have forgotten entire summers, and possibly some other seasons as well. A long autumn, a short spring, what do I know, other than that time is dissolving and slipping away. A whole season vanishes in the blink of an eye. Summers in particular have an unfortunate tendency to evaporate.

I decide to look for quarter of an hour. No more. By then I’ll be tired and fractious. I remind myself there is always a danger that once you start looking, you start tidying as well.

‘I mustn’t do that,’ I tell myself out loud.

If I start tidying, it will only result in more mess, broken glass and silly changes and I won’t be able to find anything. It’s a waste of time.

Following a controlled search, I order food to be delivered to my door.

I’ve never really had a favourable wind. When I was a child, children were not important. When I studied and worked, it was more advantageous to be a man. And now that I’m old, youth is what’s vaunted in this world.

I sit down opposite Javiér at his drawing board and ask him if he’s hungry. He doesn’t react, just carries on filing a piece of wood he’s holding in his hand.

‘What are your thoughts on windows?’ he says.

‘They’re necessary,’ I reply. ‘Why do you like windows?’

‘The light that filters through them,’ he says. ‘The way the beams are softened and kiss the walls.’

‘I think arched windows are the nicest,’ I say.

Then he turns the model around and takes out the windows from one side.

‘Is it really that important?’ I ask.

He scratches his chin. A slightly sour smell wafts over towards me. I try to remember when he last had a shower. I can’t.