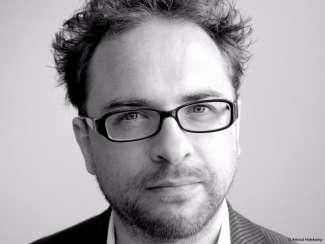 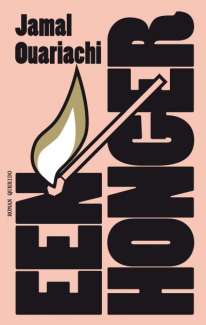 Translated from Dutch by Michele Hutchison

Faster than was safe, the minibus raced through the grey slush, spawn of snow and road salt; the outside temperature was minus 9°C, while inside an old-fashioned car heater shot out well-intentioned but nauseating hot air which, in combination with the moist carbon dioxide from the mouths of twelve passengers, recreated the clammy atmosphere of an indoor tropical water park. Aside from the windscreen, all of the windows had steamed up.

Only two voices could be heard, one male, one female, both originating from a Radio 1 programme in which a very lively conversation about politics was being held for so early on a Saturday morning.

Speed bumps, bends, brakes, acceleration: the two bites of sandwich in Aurélie Lindeboom’s stomach sloshed backwards and forth in a puddle of coffee. She’d forgotten to take her pills, carsickness had joined forces with the hangover from her leaving party that had only ended when there was barely enough time left for sleep.

She rested her heavy head on the shoulder of Yohannes who was sitting to her right. A waft of vanilla and the coconut spell of his frizzy hair activated her salivary glands and, despite her clenched stomach, she hankered after something sweet. Bag, containing a packet of Oreos amongst other stuff, out of reach. To compensate, she chewed on the middle section of her index finger.

‘Are you sucking your thumb?’ Yohannes asked.

She pulled her finger from her mouth, ashamed, and glanced at the man to her left, the man she’d only known from TV and the papers until very recently. He didn’t seem to have heard and used the arm of his jacket to wipe condensation from the window next to him. Outside, the city was waking up, the lazy winter sun rose, or to be more precise: daylight swelled. There was nothing to see of the sun on this overcast winter morning. At ten to eight, she’d inspected the contents of her fluorescent green suitcase one last time, checklist in hand. But was everything on the checklist? Over the past weeks, she’d sometimes jerked awake in the middle of the night with something - how could she have forgotten? – that hadn’t even crossed her mind yet. At moments like that, the panic was reinforced by the possibility of all the other things she hadn’t thought about during with the day when her mind was clear, things that might come and surprise her in her sleep. It wasn’t until she was actually in Ethiopia that she would fully comprehend just how much stuff she had failed to take with her and then it would be too late, because they didn’t have a thing there, of course.

The Emergency Kit contained a portable operating theatre consisted of first world frivolities such as sterile hypodermic needles and scalpels and latex gloves and bandage gauzes. It was also crammed with diarrhea inhibitors, dozens of sachets of ORS, malaria pills, broad-spectrum antibiotics and the special yellow vaccination passport listing her inoculations against DTP, hepatitis A and yellow fever. In a shop that sold travel equipment, she’d allowed them to ply her with all kinds of insect repellents, plus soap you didn’t need water for, water purification powder, a tick tweezer, flea powder and the most powerful DEET spray (50%) she could find.

For the nighttime: pyjamas, head torch, anti-transpiration sleeping bag, books about Ethiopia she hadn’t got around to reading yet.

Clothes: jeans, plain t-shirts, a lot of colonial linen – what kind of ridiculously austere mood had she been in when she’d made that selection? Had she managed to inherit some of the drab idealism the Olds had surrendered to with so much joyless passion?

She quickly chucked two cheerful dresses into the case and some make-up into her toiletry bag.

Hand luggage: food for the journey, toothbrush, notebook, camera, dictaphone. Laptop in a waterproof cover = portable laboratory. Last change: out with Stiglitz’s Globalization and Its Discontents (what was that doing there? As if she was going to read that on a plane!), in with Hemingway’s A Farewell to Arms: a leaving gift from Alice who had ‘never read such a nice love story’, even though she’d said the same thing a year previously about that overrated lightness book by Kundera, and the year before that it had been something else again, what? The English Patient? Sure, Alice had a big heart.

Packed and ready to go.

‘Late night?’ He released her and studied her face.

‘You could say that. You too, by the looks of it?’

He courageously lifted up her over-stuffed princess’ suitcase and they staggered down the stairs together. They stepped out into the bitter cold of the dark morning to the clanging, banging, drumming sound of metal on metal, and wood on metal: the stall builders were busy setting up the market beneath the orange light of the street lamps. Tears in her eyes from the cold, but she didn’t allow herself to complain: she’d miss this cold in the weeks to come.

At the check-in at Schiphol airport, the group (minus driver Koter Tewolde, who’d headed home with the bus) was met by Machteld, the lady from the charity magazine Tesfa, and Harm, the only professional journalist who’d been able to summon up interest in the expedition. Or well, interest… Aurélie had met him a few weeks earlier, during the meet and greet at the Keizersgracht, and even then she’d got the strong impression he’d rather have been sent to Afghanistan or Iraq. Those were the places to be now because simply everyone was there, but Infinite Lowlands, the magazine he worked for had had other ideas.

‘And you, who do you write for?’ he’d asked Aurélie, and she replied, with some hesitation, ‘Oh, you know, just the faculty’s paper at uni. I’m actually going for my graduation project, but I sort of liked the idea of sort of writing a travel reportage.’

Harm had nodded and then gone to fetch another drink, while Aurélie cursed herself for her ‘you know’ and ‘actually’ and ‘sort of’: twice. He hadn’t asked about her graduation project that evening.

Now he stood before her, yawning in a denim jacket and combat trousers. Machteld was the very picture of cheerfulness and greeted everyone with a protracted series of kisses, even Aurélie, who was now clearly a member of the family. She found Machteld quite adorable, such a delicious plump woman with a practical haircut, everything suggested she had redirected her caring nature to the service of her needy fellow men after her children had flown the nest; a woman who’d never be put off by cynicism, a member of a dying breed.

The group now contained thirteen members and although Aurélie wasn’t superstitious, the number gave her an uneasy feeling, which merrily joined in with the already present ensemble of tiredness, angry liver, tormented stomach and nervous intestines. It wasn’t until after customs, when there was finally an opportunity to sit down and eat something, that she came to a little. The large windows at the gate revealed ice-blue KLM planes on frosted tarmac, shrouded in thick trails of mist. She ate an apple she’d brought from home and drunk half a bottle of water.

Lots of Ethiopians in the waiting room. It shouldn’t be a surprise and yet it was. The way they looked. Businessmen in neat suits. Happy families, visibly affluent. What had she expected then? White people of course, wearing UNICEF t-shirts or Save the Children or Oxfam or whatever those charities were called. But clearly people also went to Ethiopia for business or pleasure. And with that insight, her participation in the trip suddenly seemed a complete charade. Aurélie Lindeboom joining the VSO – her! Aurélie, whose commitment to the third world had consisted of watching an old video of Band Aid. Feed the world, but only because you couldn’t get the song out of your head. She could only remember one instance in which she’d asked her parents – in a brief phase of adolescent idealism – no, ordered her parents to transfer quite a large sum (50 guilders) to the national fundraising campaign Giro 555. Somewhere halfway through the nineties that was, when they’d shown Rwandan victims with chopped off limbs on TV, bits of bodies in the mud, the endless steams of refugees on their way to the Congolese border on foot. There was a countrywide drive with an accompanying TV show and Aurélie wanted to be part of the collective philanthropy that held her country in its grip. ‘The money never reaches the people who need her,’ the Olds countered. She thought that cynical and after a lot of whining, the cheque book finally appeared on the table. A warm feeling flooded through her when the sum was filled out, parental signature added. That yellow-tinted indulgence stood for her contribution to the concerted efforts of one people trying to save another. She almost shed tears of pride.

A year or so later, it transpired that the Olds had been right in their scepticism alas: Aurélie saw a reportage about what had actually happened to the money raised. The refugee camps in Congo were mainly filled with Hutus: the perpetrators of the genocide. Not the victims, the Tutsis, as the national TV campaign had suggested.

She still felt cheated on behalf of her thirteen year old self. But what had possessed her? Where had the sudden attack of do-goodish behavior come from?

School probably. Peer pressure. It was almost religious, the way Dutch children were raised to feel guilty about their easy lives. Children’s stamps: that was where it started. Aurélie had rarely hated Charity and the Third World more intensely than during the rainy autumnal day when she’d had to knock on the doors of hostile strangers peddling philatelic sheets.

(The previous autumn she’d come across another of those breezy items in the newspaper – ‘a hundred thousand primary school pupils hit the streets once again…’ that medieval torture method to instill the Dutch charitable spirit in children (helping is suffering) still existed!)

Yet here she sat now, waiting to board the large Airbus that would take her to Ethiopia, where for the nth time in human history a famine threatened the lives of hundreds of thousands, perhaps even millions of people. Her graduation project would broker no change, but the reportage she wanted to write for her faculty’s paper – which she secretly hoped a serious paper or maybe even a magazine like Infinite Lowlands would want to republish – might possibly make a small, a tiny difference. Raising awareness, that was the point. No one needed to be afraid of a repeat of the Rwanda confusion. The little she had learned about Ethiopia up to now was that that was no war and no genocide; there wasn’t even a crazy dictator at the helm; it was simply a country where it hadn’t rained for so long that there was nothing to eat. Simple truths still existed. They still did. And she could help by drawing the world’s attention to the misery – attention that was currently focused on the war against terrorism and nothing else.