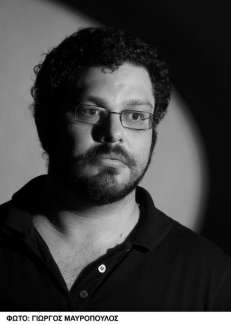 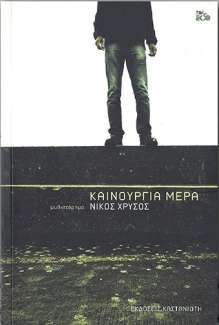 Translated from Greek by Irene Noel-Baker

After the ambulances and the Fire Brigade, the louts from the Department of Public Safety and the crooks from the Local Police, it was the turn of the water truck and municipal cleaners, who set about soaking and rubbing the ash, burnt fat and blood which had blended into a thick stain of mud on the floor of the old depot. Three rubbish trucks had parked themselves at the entrance to the enclosure and the drivers were smoking lethargically beside the cabins, while six men in orange uniforms were feeding the returning bins with cardboard boxes, faded tarpaulins, rags and wooden crates which in our opinion weren’t in the least for chucking. Two others, dressed in green and armed with heavy wire brushes, scrubbed at the stain, bored already by the vanity of the attempt, since at heart they knew it needed time, a few rains and plenty of sun to rub out the traces left by our friend. All they succeeded in doing with their scrubbing was to revive the smell which had settled into the cement, an angry heavy stench that made our eyes water and obliged the cleaners every so often to stand and hurl out bitter gobs of spit. Meanwhile the water lorry sent intermittent jets of water in every direction spraying at the rusty sheet iron like a garden sprinkler and the few people in rags remaining in the abandoned caravans hid under their blankets, hoping for the jamboree to end before they were soaked to the bone. Before the cleaning operation was complete, thick snowflakes began to fall and by the evening the entire Port was covered in a layer of snow which reached to the sea and when the vehicles and men from the municipality had departed, the homeless people poked out of their metal cabins looking for a warm corner to spend the winter and the depot was deserted for forty days, for as long as that unprecedented wave of cold lasted which paralysed a town used to gentle mediterranean winters, mild north-easterlies, tentative mistrals and brief north winds.

All that time people limited their movements, so much so that crammed in the entrance of the old bourgeois apartment blocks of the A sector - the ‘old people’s caves’, as they were generally known - we rarely had to make way for a bold elderly person disdaining the cold either to enter or leave, and when they did they never shooed us away or looked at us oddly as they usually do. Small drops slid along the wires and just before they splashed onto the tarmac they froze, one beneath the other, forming long crystal ribbons which shone like jewels until a sudden gust of wind shattered them. Hundreds of such sharp protrusions hung over our heads and yet we mourned their every fall, inexplicably. The snow-covered town had lost its rhythm, and this intensified the sense of disorientation that suddenly came over us. The sounds were hushed as if our ears as well as our eyes had been painted white; only a susurration to be heard in the mornings and a soft whistling sound, we might have been inside a giant deflating balloon. Even the cops, who wandered in twos around the streets, didn’t take any notice of us but shuffled their feet and screwed up their faces in the cold until they were totally unrecognisable as if we’d never met them before, as if they had never moved us on, threatened us, hunted us down, kept us incarcerated for all those hundreds of days in the same town. One morning we saw a policeman standing next to a frozen bundle on the bench at a bus stop, he examined the reclining figure for a moment and then with a face grey as ash he knelt and stretched out his right hand just far enough to close the man’s eyes.

‘Dozens of homeless people are dying of cold all over the country,’ a journalist’s column on the front page of an evening newspaper with the headline promising ‘a strengthening of the welfare state while also increasing consumption.’

‘Do you think the guy on the bench was dead?’ wondered Lucky, and then with complete confidence added to reassure us: ‘The cop covered him right up and he survived.’

Τhat evening we agreed that on the whole it was a reassuring scene; the sky was too unbearably white for anyone to be left with their eyes open. It sounds absurd, but it was the closest to compassion we were able to get.

Twice a day we crossed the half-deserted roads and met at soup kitchens, which were much more regular due to the cold. The soup was frozen before it reached your lips with a thin stain of fat on its surface, but even so we were less hungry than usual.

‘We might as well have calories since we can’t have heat,’ someone said, but his words didn’t alleviate the mood.

Only two Pakistani boys, who didn’t yet know the language, smiled ingratiatingly, but they were barely smiles, rather a feeble attempt to unfreeze their jaws.

After the lunch or supper we tried to remember stories we had heard him tell, and attempted to clean up the exaggerations and idiocies that had crept in at the retelling by one person or another, as if we might make a collection, an anthology consisting solely of his own words in the right order. Often the stories changed theme or content, but in fact no-one could be certain as to which of them had been told by Sebastian himself and which had been grafted with circumstances from our own life, we were so dazed by our loss that we had, more than ever, a need for pretty sounding fairy stories and revelatory myths, of narratives which would take us nearer to him or at least somewhere far away from the present which seemed intolerable. Whoever we met, they’d have heard a story and be eager to tell it to the others; this sudden disposition for solidarity brought alive the most lacklustre and feeble tales, so that in the end we parted satisfied. Whenever the four of us met - or the five of us a little later - we tried to identify each story by the moment and place we first heard it, but it was as difficult as deciding which was the true ending or the best beginning for each one. The stories changed dimension, began as miserly couplets and timid haikus, until they spilled out as lengthy narratives without end, clumsy epics, out-breaths that crystallised in the frozen air and stayed for a second suspended before being buried in the grey snow on the road.

Lucky recited one of Teo’s anagrams, ‘Small Mermaids Plunder Nine Solings’ or ‘A Good Seaworthy Sail Arrives Hoisted’, another called to mind a sailor’s yarn of Sebastian’s, Marconi reminisced about Captain Taki the Columbian, and Teo insisted he had seen Rodriguo de Triana by the lighthouse, the pirate, the charlatan, the first European to set eyes on America (he swore he had met him - a cripple in rags looking out to sea through an eyeglass and chewing cheap tobacco) and then the voices grew louder, each insisting on their own version while listening out for the others; anyone watching would have been utterly confused, and yet holed up beneath a shelter, in the dark, we finally came together in harmony, and though our song flickered and trembled, if you listened carefully you couldn’t help but understand its meaning.

The dirty water continued to flow down the drains and gutters and hearing the splashing late at night, deceived by the cold, we thought of ancient underground rivers rushing boisterously beneath our feet.

At other times wrapped in our blankets we exchanged stories of death, incidents we had heard about or made up on the spot, circumstances that we narrated as an exorcism, about a worker who had slipped on the top floor of a building and crashed onto layers of insulation material and then elated by his unexpected salvation fell into the lime pit and was burned, about a carefree dreamer admiring the flight of an eagle when a tortoise slipped from the bird’s talons and cracked his head open in two, about a wizened old maid who swallowed her tongue and died, about an aspiring chemist who dizzy with excitement at a new invention raised a strong reactive solution to his lips instead of water and downed it to the dregs, about a romantic, lovelorn lady, who prayed throughout the hunt for an arrow to pierce her heart at last, and had her wish come true, and about a masquerader, dressed as a cat, whom curiosity killed, anecdotes about people who perished ingloriously before they could say ‘It is finished.’

And whereas in previous years we read the signs of spring one at a time, the scent of lemon blossom, the flapping of storks’ wings, poppies blooming like weals on the terraces, one day right at the beginning of February an April sun rose in the sky and two hours later the snow had melted, wires and drains gleamed, curtains billowed through the opened windows like ensigns, women and men came out onto the street, hesitant and dazed, until revived by the burning sun and the seville orange trees bursting each in their turn with fresh buds they forgot to be cautious, and took to scampering about and laughing with such abandon, that it wasn’t long before the friction and the complaints began, frequent petty quarrels and miscommunication, the result of an extended period of isolation which meant they had forgotten one another’s language and only we, habituated to the streets, understood all the languages and all the dialects and encouraged by the unexpected warmth we hastened to take on the role of interpreter or mediator between Europeans, Asians and Africans, between Italians, Spaniards, Nigerians, Chinese and Syrians, the wealthy middle-aged and the rebellious teenager, decent women and girls from the Port, skippers, pampered rentiers and stocky manual workers, between natives and expats, hoping that we would hasten the spring, while away our time, keep ourselves busy far away from the bloody depot.