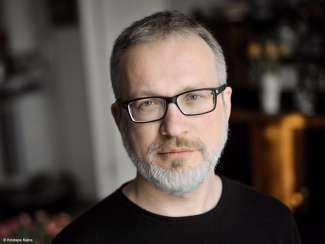 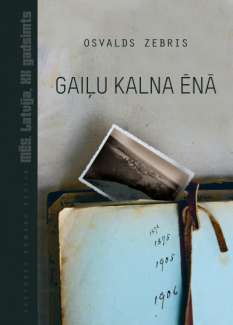 Translated from Latvian by Jayde Thomas Will

A stooping, thickset old man strode with wide steps from the side of the Dvinsk railway track. His somewhat large head bent downwards, panting heavily and irregularly, he crossed the splendid square of the new station, then the street – the hard snow, packed down by the many passers-by, crunched under the soles of his brown boots. The man stopped, raised his tired and sunken eyes toward the windows of the Bellevue Hotel glittering in the afternoon twilight and, with his head lowered, continued his hurried walk along Maria Street. A few spiteful locks of brown hair pushed out from under the edges of his hat, they rocked to the rhythm of his nervous step, his thick moustache frozen under his nose. People in groups thronged the area where Elizabeth Street and Suvarov Street met, some laughing in a carefree manner, while others were tranquilly leaving Vērmane Park; one could hear more men’s voices than those of the ladies, who were wrapped up in their furs with their coat collars pulled up against the cold. The mood before Christmas could be felt in Riga this year as well, even though gloomy thoughts still dwelt in many – a bitterness that was brought by the last days of 1906, like wine that has turned into vinegar, with peoples’ hopes having turned into a deep feeling of disillusionment. Today’s issue of the daily newspaper The Voice read: “So much hatred, misery and bleak, ominous clouds all around, that no one can ever believe in good news. And we have no ray of hope shining upon us from the future.”

Crossing Alexander Boulevard, the old man stopped near a low-lying fence that encircled the impressive walls of the Orthodox cathedral and watched the bustle of the Christmas market on Esplanade Square. His clothing was too thin, and as evening approached the cold became ever more severe; he was shivering and quickly scanning the crowds of people in the broad market square. After going through the gates that were slightly open, he looked to the right to the bell tower and, without making the sign of the cross, slid along the cathedral wall like a shadow. He wasn’t seen from the side of the brightly lit-up annual market – the man’s dark figure had almost vanished in one of the cathedral’s wall naves. Several carts had already stopped again, the gentlemen offered their gloved hands to the ladies, and lifted children of various ages from the sleigh. The children rushed off in the direction of the dolled-up Christmas tree and tables laden with candy. The little ones laughed cheerfully, and swarmed around the sweet-smelling waffles and huts decorated with shiny ribbons where the black eyes of teddy bears and dolls twinkled in the glow of the electric bulbs. The old man’s stagnant eyes also lit up for a moment, they closely followed those who had come to the shop that was farthest away, where they met at the well of fortune to fish out prizes with a few others. His observant eyes discerned a shabby, faded red wooden horse and a man of short stature in charge of the carousel who began to walk slowly in a circle while waiting for the last two passengers. Afterwards, he walked faster, a small girl burst out laughing, a small glove beckoned, the horses gathered speed, and the old man’s felt boots broke into a light trot.

The observer counted the minutes, clenched and flexed his fingers frozen numb in the grey mittens, felt an envelope with money in his inside pocket and then noticed another child. The boy was six or seven years of age, his small hand pulling a man dressed in a long black coat to the carousel. The man’s enlightened, pale face showed a restrained dislike of being in a square filled with the loud din of people. The light fog of breath rose up around his thin lips, and the lips of the old man repeated the movement of the elegant gentleman’s lips: “But just for a short moment, Pauls.”

A dark blue twilight continued to drag itself above Riga, and the characteristic noise of the city in the silent clouds of December stood out so sharply, like the brightly-lit Esplanade glowing in the blind eye socket of the night. “Children. At Christmas… only a few happy little ones,” he whispered to himself, shrinking into the deep nave. A deep, dry cough shook him as he bent over slightly and once again checked his inside pocket – everything was in its place. Having calmed himself, the old man once again focused on the square glimmering in the light, his squinting eyes finding the carousel and the elegant gentleman, who at that moment was observing with interest a young woman who was dressed poorly, but warmly, with a fidgety boy holding her hand. The woman pretended she did not notice the man, the boy broke away from her thin hand and bravely ran toward the laughter, bells, shouting, and flickering gestures of hands. The man standing in the twilight realized with pleasure that tonight he was very alert, his tired eyes almost gained the ability to zoom in, to reduce the scene to the finest details. He passed his hand slowly over his mouth, which had burst out in a smile, then up, past his long nose, the eyes, the brow, and raised his sheepskin cap higher and leaned against the stone wall of the church. The sudden relief, the long-awaited redemption – the guilt would stay right in the hard snow, it would be pressed into it until spring came and then disappear completely in the afternoon sun. Finally everything was cleared up, the protracted torment of uncertainty had receded, and he was once again sure of himself and now was ready to meet his tormentor. Suddenly, his eyes that were warmed by a smile, froze. The dark eyelashes quivering ever so slightly, he held his breath, grew paler, and the broad shoulders of this country boy drooped.

“Mommy, is that you?” Observing a girl that had just come onto the square, the old man whispered and broke away from the wall. Emerging from the side gates, he approached the carousel as if moving against his own wishes.

“Hey, watch where you’re going!” someone shouted at him. The old man could not care less and so carried on through the bustle, past the sides of large pretzels, steaming glasses and a rotund young woman with a high-pitched laugh who pointed a finger, red and swollen from the cold, at him. Someone lightly shrugged his shoulders, while another smiled in his grey beard; ah yes, a person is and remains a strange, freakish beast, but for another even that kind of jostling leaves deep wrinkles in their narrow forehead – the shame, revellers right in the heart of Riga, at such a holy time. But while the city drew the cool air into its lungs, threw a playful glance up to the glimmering stars, stamped out cigarette butts and caressed the back of a newly-acquired sweetheart, the old man approached the carousel with wide steps. He went around, waded into the small snowdrift towards the shadow of smiling horses and stretched out his strong arms. The carousel was turning slowly, and he carefully lifted the children off one by one. Starting with little Pauls, then the nimble troublemaker, and finally her. The old man’s strong arms were shaking – the mother’s warm eyes glanced at him in astonishment, but not a sound emanated from her lips. It was only the middle boy that made a high-pitched scream, however no one heard the screaming on the other side of the carousel. The woman was giving snappy answers to the smartly-dressed man in the black overcoat, for whom this evening’s walk suddenly appeared to be full of mystery, quite incomprehensible and immensely promising.

“Pauls, we’ll go over to Daddy’s now, now I’ll…” the old man said, running out of breath. He held both boys with one hand, and the girl with the other. He hurriedly pulled the boys across Totleben Boulevard, turned to the right, and, at that moment when shouting, uncharacteristic of the evening groaning, rang from the square, this peculiar group of four was already turning off onto Nikolai Street, then once more turned to the left and went a good way along Crown Prince Boulevard in the opposite direction – all the way to Bastion Hill, which was sinking into the evening twilight. Little Pauls started whimpering, the other boy energetically trying to pull his arm away, while the girl kept turning her head back:

“Hey! Over here! Help!” she shouted ardently, however the thin voice died in the heartbeat of the city, in the voices, among the shouts of the cart drivers, in the muffled laughter. Before the holidays, people hurried to settle long-postponed scores and transactions, and meet for a brief chat so they could devote themselves to the bustle of Christmas with a certain peace of mind.

The odd stranger smiled nervously, dragged the little ones to the front, and once again to the left, onto Alexander Boulevard, and then they were already coming to the shiny, well-lit facade of the Imperial Hotel. The doorman in a dark blue uniform stood next to the high double door, the gilded buttons of the uniform reflecting the light bulbs’ yellow glow, which the luxurious building generously poured out through the broad windows of the lobby. To the little girl – whose name was Laimdota – it seemed that the door guard would take the bad old man by his collar at once, call for the police, and she would be rescued, but instead the doorman hurried to the sleighs that had just arrived in order to take packages wrapped in brown paper and offer a white glove to a lady submerged in her foxtail coat. The old man rushed inside through the wide double door and to the reception desk; to the right one could hear the pop of billiard balls, as the smell of cigars and hot food wafted in – there was a restaurant that was situated on the basement floor, one of Riga’s most luxurious entertainment spots. In the evenings, it was the round gold 10 ruble coins that sparkled along with the 25 ruble notes. The first Latvians that had just gained the means favoured this place, those who wanted to eagerly spend and bare their teeth to the Germans and Russians.