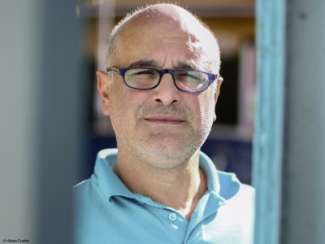 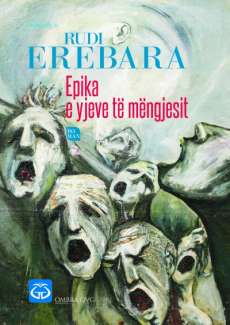 Translated from Albanian by Rudi Erebara

Edmond popped the Fernet bottle open, his mouth still full of bread and half-chewed beans. He filled his cup to the brim. He burped. “Today, on 17 October 1978, we, the verily exuberant people of Albania, mark the celebration of the anniversary of our beloved Party leader, through a host of achievements and over-fulfilments of the central plan in all fields of life. This is the main news edition in Radio Tirana...” but he paid no attention. A gust of wind blew like mad outside as he filled the second glass. The windows crackled. Then the rain started to fall down in heavy drops, pounding the glass, with small interruptions every now and then when the wind blew anew. “It looks like they stopped mentioning China every second word,” he thought. He put away his plate and spoon on the sink. He washed them in cold water and capsized the plate. He put the spoon on top of it. Then he swept the table clean. He wandered around, cigarette tucked in his mouth as he did not want to sleep that early. He sat down and picked up a folder, then he went to take another sip to scare the sleep away. The third glass wiped away the rest of his hoarded fatigue. It happily dawned on him that tomorrow would be an easy day. The rain outside shifted into a thunderstorm. He wanted to have another glass, but then again he was too sleepy. He took the radio into the room. He tuned in to an Italian channel and kept the volume down to the minimum. He lay in the bed and got lost in revelry. He woke up just a bit later as the room became chilly. He turned off the radio. The rain started to fall with brief intermissions after the first thunderstorm.

The morning dawned in a single colour. The sun broke through dimly as a dot of milk on the coffee. Edmond glimpsed it only once on the tip of the mountain, wrapped in a maelstrom of clouds as a white blotch on the steely-blue wall made of air. Then it vanished. He blinked and looked at the clock. Then he spoke out just to listen himself speak: let’s see if we’ve got a new pope! The battery-powered radio started crackling like a piece of iron sweeping on the wall. Edmond rubbed his eyes and read the letters on the blue top of the radio: 'Illiria 2 bands 8 transistors/volume/tuning/M-black key, 2 for medium and short-range.' He turned on the volume, just a bit. Then he adjusted the frequency, and right when he least expected it, the radio started roaring in Italian: “Campari ed allegria!” Edmond abruptly turned the volume control down to the cracking off noise again. The broken and reinstated silence came over him as a substance suspended in mid-air, impatiently vibrating behind the window pane. He pricked up his ears so as to listen to the news at the minimum volume. The silence was still on. The voice of the speaker cut invisibly from the darkness of the radio waves into the viscera of the radio, from the loudspeakers out into the fresh twilight of the room, then into the dusk of his ears, lighting up a flame inside them.

Buongiooorrrnooo stamattittna aaaa tuuuutttiiii! Yesterday, on 16 October 1978, three days after last Saturday’s session, the papal conclave elected the new pope, the Polish cardinal Karol Józef Wojtyła, with 99 out of 111 votes. The Pope accepted his election with the following words: “Faithful to my belief in Christ, my Lord, and faithful to Our Lady the Mother of Christ and to the Church, regardless of the difficulties I accept.” The Pope has chosen the name of Giovanni Paolo Secondo in honour and remembrance of the late Pope Giovanni Paolo Primo. The Pope addressed the crowd in the Vatican City with these words that stood out of the protocol: “Dear brothers and sisters, we are saddened at the death of our beloved Pope John Paul I, and so the cardinals have called for a new Bishop of Rome. They called him from a faraway land – far and yet always close because of our communion in faith and Christian traditions. I was afraid to accept that responsibility, yet I do so in a spirit of obedience to the Lord and total faithfulness to Mary, our most Holy Mother. I am speaking to you in your – no, our Italian language. If I make a mistake, please 'corrict' me…”

Wojtyła became the 264th pope, according to the chronological list of popes, the first non-Italian in 455 years. At only 58 years of age, he is the youngest pope... here the radio control was promptly turned off by Edmond’s eager hand, curled all around it as a snail’s shell around the snail. Allah is great! He jumped for joy – our Polish mate became pope!

His voice cut through the dusk broken down by the city light, as if it were something tangible. He fumbled haphazardly on the floor to reach his socks. A heavy groan emanated from his throat. His smile turned into a frown and then gradually into an impatient grimace. He sat on the bed with his head down. The silhouettes of his socks gave a faint contrast against the fuzzy background of the tiles cast in grey concrete blocks. He pulled up his body numbed from sleep. The rattle of the glass vibrating under the thunderstorm made him look up to the clock. He stood up and switched on the light. He took the radio and tuned in to Radio Tirana. He switched it off and opened the window. He sniffed a few times outside just to gauge the cold out there. It appeared to him as if his strange feeling of happiness sneaked out with the sniffs and started roaming the city outside, under the bleak sky, as a little invisible phantom.

He went to the bathroom. He stopped in front of the mirror so he could see with his own eyes the frozen smile on his lips. He swept his hand over his unshaven cheeks, made a move to get out, before stopping at the bathroom door. He looked at the clock again as he managed to put up another victorious smile on the ruins of the vanished one, and he said in a loud voice: I need to be clean-shaven, as if I’m going out to a wedding, venerable Tóngzhì Suleyman: our Polish mate is now Comrade the Pope!

He put the coffee pot on the electric burner. He took the radio and put it on the table. He grabbed a bread crust and saw the clock. He heard seven minutes worth of Italian radio, the radio tightly pressed on his ear. Then he switched to Radio Tirana and turned up the volume. The water boiled in seven minutes. He went in the bathroom to shave. He put some foam on his cheek as he gnawed at the dry bread crust, trying to spare his lips from the foam. The brave voice of the speaker rattled the radio case. It enumerated the rate of over-fulfilments of the central plan and the selfless endeavours to fulfil the tasks of the sixth five-year plan in the heroic battlegrounds of the large industrial compounds still under construction. The speaker put a heavy stress on the 'r' sound, she made everything sound strrronger, tougherrr, grrreater, and everything sound like somebody else put it on the script for her, Edmond said loudly.

Edmond made an abrupt end to his heroic chanting by splashing a handful of water on his face. He grunted and started to wipe his face dry with a towel. He rubbed the cloth vigorously on his face so as to get warm – may the bloody Russian revisionists lick our asses down to the square root... Bastards! Rascals! Traitors! Let’s write it down in huge letters: faster, further, higher – the radio played the soundtrack of some worker’s march and Edmond adapted the refrain to the rhythm of his shaving moves: “The pickaxe in the one hand / our country lalala / the rifle in the other hand / lalala, lalala / we press forward, always forward...” He turned the radio control off and the silence of the rain carried on.

He went outside and down to the staircase, glanced at the clock and at the weather outside in the vain hope that there was no rain, and then he turned back to fetch the umbrella. That umbrella was a source of permanent nuisance. One had to take care not to break it. One had to mind so that it did not get stolen. Buying a new umbrella is five working days’ worth, he mumbled to himself as he always did, as he grabbed it by the hand grip. As he turned the key in the lock, he said in a loud voice – yet only loud enough for him to hear – and in sync with the cracking of the lock: crick-crack. He did this to convince himself that he actually locked the door. He went downstairs bumping his umbrella at every step, one bump following the other.

He went four floors down and then exited the building, constructed by volunteer work, from exit three. His home, apartment 13, remained up there; two rooms and one kitchen, empty and lonesome. He went straight ahead, turning his back on it. He thought of his parents, about how they died one after the other, about how it emptied his life. They left him with the void boxes of his apartment’s rooms, they left him alone with his memories and his freedom, lots of freedom, so much he couldn’t possibly make use of it all. That daily remembrance was quite a difficult feat to accomplish, and it was hard for him every time he thought about leaving his home behind; he struggled with this habit as if it were a vice.

Freedom follows loneliness, as days follow nights. It took its toll on him, especially on weekends. It got entangled into his loneliness until both became a knot, and he was all alone in the whirlwind of his unsolvable memories. The time and space of their absence grew bigger as a trench dug in the mud gets bigger from the water collected in winter. In the long winter nights, the sadness ate up what once filled him with joy in the long summer days. It appeared to him as if the case of the radio pressed on his cheek was the embankment of that empty trench. There the loneliness got finally stuck and ground to a halt. The plastic radio case vibrated with music and unknown voices speaking in Italian. No words were intelligible in the new songs, they sounded like the wind blowing into an empty ditch, blowing out from the other side with unfathomable scents reminding him that all obstacles can be overcome, as they made him reminisce of bridges leading into better times, when fine memories shined up his days, as the summer sunshine brightened the facades of old beachfront houses with a butter-like colour, similar to the reflection of white skirts on the skin of suntanned young girls’ knees.