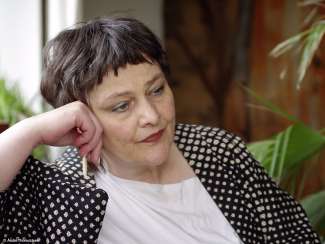 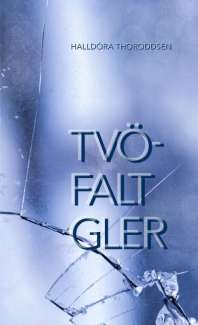 Translated from Icelandic by Philip Roughton

This story deals with, among other things, the gap between generations in our society and the isolation of both youth and old age. The main character is a 78-year-old widow. She has fallen in love with a man named Sverrir, and they are planning to move together into an apartment in a retirement home. In this excerpt, the widow ponders old, disturbing memories, makes up a conversation with her late husband about her new fiancé, and then goes with Sverrir to take a look at the retirement home where they are planning to move.

Sverrir is a different type of man than she’s normally been attracted to. He’s representative of the ordinary man. Of men she’d always found too unadorned, suspected of lacking imagination. Now she finds herself ever more inclined towards unpretentiousness. The fundamental man. Who has something noble about him. Not that she has any delusions about the ordinary man. Wherever he’s to be found. He is, probably due to some evolutionary mistake, basically a fascist. She senses this clearly in the blogs that she occasionally reads. Hero worship is never far off. We probably had one big chief and an unwavering pecking order in our primal habitat. A repressive order that never became disorganized except through intratribal battles for dominance. The rest is learned. Civilization forms a thin veil over these simmering instincts. Sverrir is a civilized man, unusually ordinary. He’s no brute; she has no taste for brutes.

She lost herself to a brute once. He was as beautiful as a Greek god, ran nimble hands over her body, each touch sparking a dizzying euphoria. They had little else in common. He was a character in a tragedy. Who concocted his potion? And who wielded the whip that she obeyed blindly? She barely remembers herself in that period of humiliation, when unrestrained lusts reigned. A year later she suddenly sobered up, and could barely understand what she’d been up to.

That murky man turned into a wild beast. In those days, it was easy to score drugs. Maybe something of the swirling artistic life in Paris in those years was derived directly from the pharmacies, but now most of it requires a prescription. He swallowed anything that eased pain and could protect against unbearable mundanity. Which ended in perfect madness. And when she, according to all moral standards, should have helped the man after his fall from a roof, she could not or would not. She stared at him in his helplessness and didn’t budge. No feelings stirred within her, she was as cold as ice and still envisions that incident from the outside, as if it involved an entirely different person. Not her. It was never her.

Cuts herself with a knife, warm blood breaks out onto the white skin

Yes, it was her. Bad and good at the same time. A part of the eternal battle waged in every pore, between above and all around. Why shouldn’t she take an enthusiastic part in that wild party? Christ was hardly sacrificed for peanuts. It would be a blatant insult to the Lamb not to commit real crimes.

She still chats with Guðjón – promiscuous as she is – asks him what he thinks of the situation.Knows his answer: “That guy. He’s really basic, of course. A regular doctor dude. I know the type. Got locked into nine years of study at a time when they should have been doing some maturing. Came home with that one favorite album of theirs from adolescence and put it on the record player every time they drank.”

“Easy there, you can air your prejudices elsewhere.”

“Fine, suit yourself, we know how well that always works out.”

This is how Guðjón usually spoke when he yielded to her. Not to say that she controlled everything. In her opinion, she devoted her life to Guðjón and the boys.

Her life was about making every moment fertile. Filling the days with importance and song. Fending off despair and numbness. Which was no small thing for one little woman. For a certain period, she did the breathing for all of her surroundings, considered it her duty. Until she could no longer breathe, and then died to herself for a while, without telling anyone. Quit everything for some time, and sure enough, no one noticed her death. Everything went on as usual.

A fragrance of evergreens, one window pagan, the other Christian

Nesting, when is it finished? They have their eyes on a retirement home in the west side of Reykjavík. Apply to lease an apartment with access to facilities, intending to settle down in the wonderland of old age, with all the hustle and bustle stilled and everything proceeding cautiously. But it’s a short distance downtown, and they can have guests. They chose the west side after tough negotiations. She would have preferred to buy an apartment at the home on Lindargata, but Sverrir grew up on the west side and can’t forget it.

A house full of old people is completely contrary to her aesthetic sense. It’s a duller idea than women’s and men’s clubs, duller than day nurseries. Why have we agreed to such dullness? Blinded by a dream, until the distortion comes into full view. Always too late to catch the beauty that peeks out of every chink. It takes Sverrir a long time to convince her of the reality implicit in this. In their position, helplessness can take over without warning. The reality is apparent; it’s simply a matter of time.

Even cats slide on the ice

Her friend Simon is livid at the news of the retirement home. Calls repeatedly from Paris. Says that he saw this coming, ever since he first set eyes on Sverrir. He’d perceived that, deep down, the man had a fetish for being buried alive. It takes her a long time to calm Simon down, and she senses his defensive response to his own forsakenness.

This waiting room of death is bright and beautiful. On a tour of the retirement home, they chat with several residents. Simon had insisted that a faint smell of urine lingered over the place but, luckily, they’re protected by the diminishment of the senses in old age. They like it and look forward to it. Music drifts from one apartment. There’s no mistaking 'Return to Sender' by Elvis Presley. A new generation has settled in the retirement home. 'Bless You, My Countryside' is in a tight spot now. They arrange their future like teenagers in love. The colours on the walls, the curtains.

Sunny moments in February: two hours, she spends them at the Insurance Agency

The bragging is ubiquitous; it’s common to the residents they chat with. What comes over people at this age? Is she like that now? She tries to beware of boasting, because she’s certainly noticed it in old people. Even her father, who had good taste, fell into boasting towards the end. They brag about their good health, their stamina, and their achievements. “I would have dealt with this just like that back in the day.” “How old do you think I am?” The men are worse; the downfall is more drastic for them. They remind her of the youngest children she taught. When they start school, before they learn to hide. “Look at me,” “look at me,” sounds from every corner, and the teacher has her hands full answering: “I see you, you’re there in your full right. You exist.” I’m sure we shout this all our lives, look at me, look at me, look at me.

Of course she knows this. Castrated love that fertilizes nothing but itself has never been appropriate. We demand purpose in our deeds, we cling to a comprehensible plot. Fear anything that forms burls in it. The plot about us in context, which has long been a farce. Love between old people isn’t healthy-marriage love, whose aim is to fill the earth. Nor do people connect such love with the aesthetic or the celebration of physical pleasures; on the contrary, it’s considered unappetizing when see-through old age is involved. Imagination itself shies at the idea of crinkled and dry old people humping each other with the aid of lubricants. Sex is the only thing that comes to their minds, possessed as they are by that one idea concerning connections between people. Heirs become uneasy. Old-timers in love tend to spend money on luxuries and forget their primary obligation to the struggle to ensure the continuance of their genes.

Eider, purple sandpiper and oystercatcher, churning eroticism at the seashore on Eiðisgrandi

Kristín from the Couples’ Club, that benevolent woman, rises from her bedridden state to warn her. She has never before contacted her of her own accord. He’s probably the best of men and she’s sincerely happy for her. Personally, however, she has little interest in this sort of mingling in old age. She herself has rejected numerous suitors. Above all, she wants to maintain her independence. They’re transparent, Kristín’s passions. “I’m not that kind of person,” she says, exposing herself in her denial.

That’s how people typically expose themselves. She has often discerned the same while listening to others in the hot tub at the Reykjavík Swimming Hall. They’re usually the opposite of what they claim to be. There are very few who try to tell the truth about themselves; instead, they try to conceal the looming disgrace: their obvious flaws. Who admits to being envious? Not Kristín.

Displaying perfect carelessness, she puts on the red dress

It turns out that Sverrir is not a widower as she thought, but divorced. “It just ended,” is all he would say about it. He says that his ex-wife is the best of persons, despite being a bit clingy and fragile; she always needed a lot of help.

“Maybe a little. I found her helplessness and beauty attractive back in the day.”

Sverrir moves in with her while they’re waiting for the apartment. Their love is free of various defects; there’s no trace of a power struggle. It would be possible to create one, but they lack the passion. Cooperation makes it possible for them to tell the story behind each task, and that requires at least two. When the radio informs them of falling stock prices in the world’s financial markets, she doesn’t simply talk to herself and the device, but to Sverrir. “Then it’s good not to have too many of those,” she says, “they tried quite hard to sell me those scraps of paper of theirs, wanting to get their hands on my retirement pay.” They put in a lot of effort, practice rhythm and harmony. Which one loves the other more and the dominant position that this can create is more or less absurd in their competitive environment.

The bells in the tower of Hallgrímskirkja church play a melody, as out of tune as ever

The director of the retirement home, a woman of around 50, informs them that they’ll have to wait a year at most – they have such a quick turnover. They both smile indulgently at the director’s phrasing, as if she seems to think that it conceals the facts of life. It’s as if all of society is on the run from that uncomfortable word. We’ve even marked out a stall for death off the beaten track.