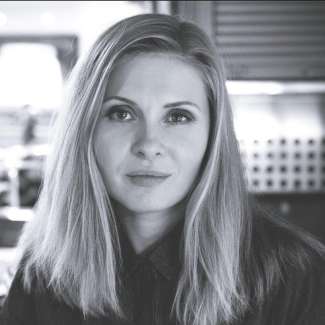 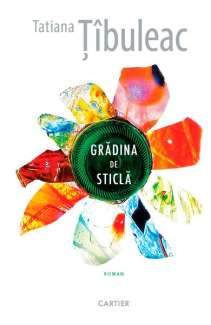 Translated from Romanian by Andrew Davidson-Novosivschei

You called me a sentimental bitch and I’ll chew you down to your mother’s milk for that.

I’m born at night, I’m already seven. She says she’d hold me, but her arms are busy. A blue light turns on overhead, tied to a tree with a cable. It swings. I lay my head back and I can see it better: it’s round like unsliced bread. We pass through the Gates as if through a stone belly. That’s how the city is, I think. Downhill, the road is always downhill. Ice grabs the soles of our feet, the street shrinks. She lends me her pocket, so I don’t slip. And I can look around at all that beauty! That softened light. That sky with stars in hiding. Blocks, blocks, blocks of flats. None more than four tall. None more than four wide. Her pocket is furry. My fingernail is burning. The nice lives of little people in the windows. Thousands of squares with a pear in the middle. Side by side, one on top of the other. The ones below hold onto the others’ shoulders. They are strong­­—the ones below. A dog—blue—follows us with its little pawprints. That’s how the city is, I think: fours and blues. And never fall back, never get left behind! We stop next to a fence. Закрой глаза и забудь всё*. I don’t understand anything. I forget in a second.

*Close your eyes and forget everything.

There was no morning like the one when I woke up in her bed. I slept right in the middle, like a nut in chocolate. Five girls could have fit in with me if we had to. That’s how candies live, I thought. Wrapped in rustling layers until a mouth eats them. At the orphanage, I only had a blanket. Mine smelled like mice, but it could have been worse. Around me, light jumped out of things like I’d never seen before. Out of chairs, out of walls. A new world at the window. The berries like beads on a branch. A magical beast. In the sky, tree tops and birds mixed together. A voice towards me: Ты проснулась*? It turns me like a key, finds an opening on the left side of my ribs. I get out of bed and suddenly have a mother. What a relief to no longer be an orphan, what fear that I could become one again. She said, Ласточка,** and that became my name.

We ate three times and it turned into afternoon. Her tea had a smell, the bread—the butter, the butter—the honey. My left side started to hurt from eating too much. The gas burned like a blue water lily. The radio was singing любовь, любовь, любовь***. Tamara Pavlovna listened, her lips pursed, the room filled with warmth. She showed me her house and it turned into evening. I keep that day with me in every thought, in every breath. I couldn’t find its equal in money or love. Nobody wanted me more. Not even you.

It wasn’t exactly a job - collecting glass – but it was something. There was a ladder in Tamara Pavlovna’s head, and people could climb it based on merit. On that ladder, we found ourselves below postmen, but above salesmen of kvas. Letters could be valuable, whereas the kvas, once drunk, was gone forever. Take a bottle. Even empty, even pissed in, even someone else’s bottle could make you rich. As long as you’re not lazy or a drunkard, and we weren’t. We knew how to collect, and we collected. We collected with our hands frozen-numb, with our stomachs heaving from the smell. Money out of nothing. Earnings from nothing. This kept her going. This made her raise me. Not from a good blue heart, as I thought in the first few months. Just for more money.

She was getting older and needed help, she said. But I think what she wanted was what all parents and pet owners eventually want: gratitude. And that’s what I gave her, that’s what I give her. Gratitude she can have. Despite all her selfish ideas, she was the only mother I had. But at what cost? What good is it to take a blind man to the top of a mountain? Why cover a corpse with fresh roses? The more she bought me, the less I wanted. She had a heart, I won’t deny it, but it was of another order than mine. Her heart wanted gold, mine wanted stars. Would she cry if she could hear what I’m saying, I wonder? I know she’d cry. Ungratefulness, the nasty bitch, cuts deep. Forgive her, punish her – all the same, the stupid idiot.

She didn’t adopt me from the orphanage, she bought me. I learned that later, though not so much later that it didn’t eat away at me for a few years. I never asked how much she paid and I regret it now. I would have liked to exchange that money into glass bottles to know how much my life was worth. Then I would have taken those bottles, found you and smashed them over your head. To break you like you broke me. I feel guilty for speaking ill of Tamara Pavlovna. And I hate you for that. Sometimes I think that, if I hated you just a fraction more, my hatred would come full circle and become love. This fraction scares me the most. That’s why I keep postponing everything.

After hanging out the clothes, I sat at the corner of the block of flats on lookout. In the summer, Șurocika was the lookout from the balcony. In the winter, she couldn’t do it because of the cold. It was hard for me to believe that someone would steal frozen old clothes and run off with them through the streets, but I never objected. I wanted a day to myself, without rummaging through trash. I’d call a few times, “pss, pss, pss”, and in a few seconds Morkovka snuck up to me and climbed into my lap. There aren’t winters like that anymore. There aren’t cats like that anymore. This magical beast!

I finished towards evening. I took the big basket out of the house and I wrapped the clothesline around my neck. I had to make several trips. What took up one rack in the closet, outside was spread over three metres. First, I had to take in the frozen curtains. They were like doors and I pulled them along under my arm, taking care not to hit a parked car or a pillar. If I did, Tamara Pavlovna would wash them again, cursing me the whole time. The same with the fine embroidery. They had to be carried carefully because they had ribbons that could break in the cold. That’s how I cracked the embroidered TV cover, and I went through that winter nameless. Of all the things in the house, my favorite was the tablecloth in the living room. It was round, a yellow-gold silk, and had soft bordering with knots around the edges. Mihail brought it for her birthday, which made it even more precious. I was mad about that tablecloth! When it froze, that bordering stuck straight out and, for a few hours, it looked like the sun. With it in my arms, I could cut through any winter.

I don’t have any illusions about Tamara. Not at all. When I’m old, I’ll be alone as a leper and all my fears—all strapped down tightly in guillotines with their blades up—will escape and run me down like a pack of wolves. It’s better that way, knowing that no one will be with you at the end, especially those who you waste time and money on. What a relief to know that the absence of the one you love is justified. That the emptiness in your heart isn’t your fault, or anyone else’s. I can see, I understand that Tamara wouldn’t be able to take care of me, but this just makes me give her even more. To love her even more hopelessly. What good is it that Tamara Pavlovna raised me? How many cups of water had I brought her, how many times did I cool her forehead? Me in the madhouse, Tamara in the hospital. Anyone else in? Who’s watching when everything comes to the end?

How many memories make a person an alcoholic, how many betrayals make a child’s heart black? I shouldn’t have become a doctor, I shouldn’t have. Work poisons some people, but after my Tamara, it wouldn’t have been right for me to be around other people’s children. I see them at birth—soft and helpless—and I think, at least they’ll be happy. With mothers, look, and fathers. With money. Then I see how they latch on to the one who gave birth to them, and they suckle on her like little dogs. What is one person’s pain to another’s hunger? Cruelty. That cruelty is already in there, in them, thriving like a red flower. Cruelty grows in a person more quickly than fingernails, than hair, than teeth. The woman who gave birth to a stillborn boy—I still went to her. She said she feels like a mother. Death just accelerated some parts of the process. We all wind up there—the living, the dead, and all those in between. Her words took root in me and they fill my head. I still think of them, I turn them around, I want them to be true for myself. And all those in between. Death! Death does what it wants anyway. But what happens when some parts of life get away from you? When you see that you still have flesh and strength, but life somehow sends you to the end of the line and looks at you like you’re almost dead. I’m in between, Tamara’s in between. My whole life was in between. I’d like to take at least two steps back. And avoid this bitter disappointment that called itself love.

There are people in this world who simply cannot live without telling stories. For them, these people, always beautiful and usually insane, life needs to be a story. Because, only there, between its soft, enchanted ribs, can they accept evil and pain, sickness and betrayal. Because they know. They know that a story never leaves things unresolved. Even the shortest, saddest story always makes sure that things are put right.