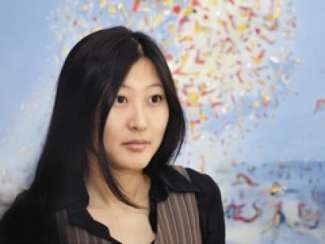 Anna Kim was born in 1977 in Daejeon, South Korea, moving to Germany in 1979, when her father took up an academic post in fine arts. Since then, she has returned to South Korea several times for short visits.

She studied Philosophy and Theatre Studies at the University of Vienna and wrote her master thesis on Georg Lukács´ Theory of the Novel.

She has published several short stories, essays and poems in newspapers, literary magazines and anthologies. Her three novels are Anatomie einer Nacht (Anatomy of a Night, 2012), Die gefrorene Zeit (Frozen Time, 2008) - which has been translated into English and Albanian - and Die Bilderspur (The Trace of Pictures, 2004). She has also written a collection of poems, Das Sinken ein Bückflug.

Kim, who has received numerous awards and grants, lives in Vienna.

EUPL Year
2012
EUPL Country
Austria
Die gefrorene Zeit (Frozen Time), 2008
Since the end of the war in the former Yugoslavia, more than 30,000 people were reported as missing to the International Committee of the Red Cross. So far, only 15,000 of them have been identified.

This is the background to the story Anna Kim tells in her second novel: the search of a Kosovar for his missing wife and the first-person narrator’s gradual penetration of the complexities behind this traumatic event. Not only does she experience everyday life in the Serbo-Albanian conflict zones of the Kosovo, she also encounters the gut-wrenching work of the archaeologists and forensic anthropologists, and the Red Cross questionnaires to collect ‘antemortem data’. Above all, the dimensions of memory and the loss of it, of interrupted biographies and of a “frozen time” open up in front of her.

In this extraordinary book, Kim takes up where she left off in her debut novel Die Bilderspur, exploring concepts such as foreignness with a depressing relevance to the present. However, it is not just contemporary history that she is interested in, but also the linguistic portrayal of such incomprehensible horror, the search for the right words and sentences to describe something so extreme. 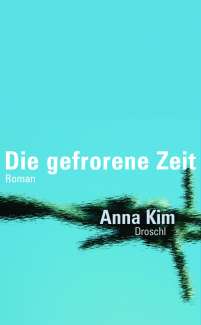 You agreed to answer the questionnaire, but sometimes your hands tremble, tremble in concert, as do your words, an aftershock in your throat; you stare at the door, as if it were a window with an unforgettable landscape in it, then wake, rummage in your pocket and place your wife’s passport, a slim photograph album and your marriage certificate on the table. The Antemortem Questionnaire: twenty-two sections recording the distinguishing features of a missing person, characteristics that person possessed while still alive, ante mortem, with the aim, through the  post mortem analysis and comparison of skeletons, pieces of bone, data, of finding them. What we find is not the person, but their remains, their innermost essence, if you like; on the other hand, what is left, the last remaining scraps, are mere externals and yet they - the bereaved and the researchers - talk of identity, meaning complete identity with, at the same time inner unity of the person. The levels intermingle, seem inseparable: it is unavoidable - the corpse becomes an individual. How long can this thought last? Only as long as the human fragment has not been seen, as long as its death can remain an abstraction, an idea.

The deceased don’t care whether their identity is found or not, for them it doesn’t matter whether they have one or whether it was lost over the last few years. From their point of view, it only exists for others, not for themselves. If it is eventually found, it is physical and coincidental, coincidental because it is never really a matter of their identity, but solely of its classification.

Identity according to the questionnaire is clearly defined, it consists of sex, age, illnesses, clothing, eyewitness reports and chance encounters. Our conversations are an attempt to home in on the missing person, to tie them down, hold on to them. Perhaps it is true that the uniqueness of a person - their identity? - does in fact not die with them but can be found long after their death. Every sentence is an act, every word is utilized: to establish identity by speaking, by putting it into words, eats away at its substance since the person is replaced by talk, following in unknown footsteps that are always several sizes too big; in addition the alien perspective is alienating - and one particular distinguishing feature steals the show: being missing mutates into the birthmark on their forehead, into the scar on their cheek, into their predilection for swimming in the rain, strolling along streets after midnight.