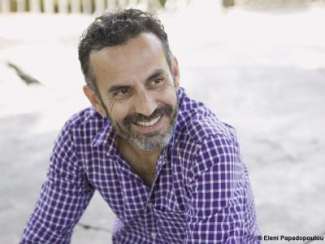 Antonis Georgiou was born in Limassol, Cyprus, in 1969. He studied law in Moscow and works as a lawyer. He is a member of the editing committee of the literary magazine Anef. He was also in the editing team of the Theatre Diaries, a series of publications that illustrate the history of theatre in Cyprus. He is currently a postgraduate student of theatrical studies at the Open University of Cyprus. In 2006, he published a book of poetry, Πανσέληνος παρά μία (Full Moon Minus One), and a book of short stories, Γλυκιά bloody life (Sweet Bloody Life), which was awarded the State Prize for Short Stories. He has also contributed to several short story collections. Georgiou also writes plays, some of which have been performed by different theatre groups in Cyprus. His play My Beloved Washing Machine won the Theatre Prize of the Cyprus Theatre Organization and was included in its repertory. Antonis Georgiou is also the writer of the plays The Disease, 2009; Our Garden, 2011; La Belote, 2014; and I Was Lysistrata, 2016.  His book An Album of Stories, published in 2014, was awarded the Cyprus State Prize for a Novel. It is being adapted and presented on stage in 2016.
EUPL Year
2016
EUPL Country
Cyprus
Ένα Άλπουμ Ιστορίες (An Album of Stories)

Antonis Georgiou's An Album of Stories uses a polyphonic narrative in this 'post-novel', a mosaic which presents a whole country and its people. On the occasion of a grandmother’s death, a range of stories are revealed. From the grandmother to the family and from the small village to the whole country, these stories speak about life, love, death, war, refugees and emigrants. These are old and new stories, in the Greek language and Cypriot dialect. The stories are aided by quotations from newspapers, recipes, children’s drawings, folk songs, laments, poems and many photographs from family albums. Sometimes the stories are confused and the reader is also confused: where does one story end and another begin? And does it matter? Or perhaps our lives are nothing but a collection of stories, that we remember sometimes, relate them to the stories of others, write them down and give them a title. And they become like one story, the story of each one of us, the story of all of us. Aren't our lives nothing but an album of stories? 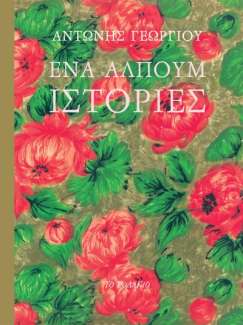