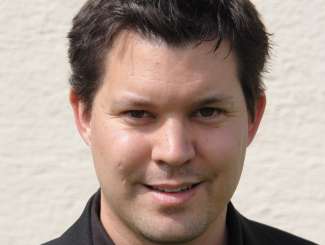 Armin Öhri was born on September 23, 1978. He grew up in Ruggell, the northernmost village in Liechtenstein. He studied history, philosophy and German linguistics and literature. Since 2009, he has published a variety of stories and novels in two independent publishing houses, including the well-respected German publisher Gmeiner. His works tend to be set against a historical backdrop and are based primarily on literary examples of the 19th century, such as entertaining feuilleton novels that fall into the crime genre. Öhri works in the education field at a business school in Switzerland.

EUPL Year
2014
EUPL Country
Liechtenstein
Die dunkle Muse (The Dark Muse)
The Dark Muse – the first part of a chronological series of linked novels – is a complex historical crime story that turns the established formula of a whodunnit upside-down: on the very first pages the reader already gets to know the murderer, a gentle professor of philosophy. Hereafter, the audience is given the opportunity to deduct why a young prostitute was killed. The novel thereby gains in tension, so one wonders if the culprit will squirm out of the snare of the law and what his motives were to commit the crime. Several chapters describe the suspenseful court procedure against the delinquent professor Botho Goltz and show how this brilliant mind causes the charges brought against him to collapse like a house of cards.

The semi-professional detective in Armin Öhri’s novel, Julius Bentheim, is a young Prussian student that (due to his drawing talents) helps the local police as a draughtsman for crime scenes. Through the eyes of this protagonist, the reader follows the ambitious story through the streets and infamous sites of late 19th century Berlin. Major historical events in The Dark Muse are not just a convenient frame to stage the narrative: quite the reverse, the writer wants to gain perspective on society and on the human condition. Extensive research work has been done by Öhri to portray the historical backdrop and atmospheric local colour. Many descriptions of Berlin in 1865 were formulated on the basis of original sources and scientific works and are embedded in the narrative. Furthermore, the handful of non-fictional characters who appear and play prominent parts in Öhri’s series include Fontane, Virchow, Bismarck, Moltke, and Retcliffe. Some of the published praise for The Dark Muse include the words “unique”, “thrilling and highly recommended”, “striking milieu descriptions”, and “a psychologically crafty game of cat-and-mouse”.

This book has not been translated yet.

The news of Lene Kulm's murder reached Inspector Gideon Horlitz in the early morning. When the chubby-cheeked police trainee who had been entrusted with the urgent message finally found him, he was just visiting the site of a different human tragedy. Several people swarmed around him, most of them in uniform, talking excitedly among themselves, surveying the room with measuring tapes and plumb lines. Only one person was no longer moving: he was hanging from the ceiling on a rope, an overturned chair beneath him.

The group had come together just outside the old city centre in a side alley that was not clogged with horse carriages, workers and dawdlers. The room itself where the men were investigating the suicide was at the back of an extensive property, part of an arcade that probably had served as a retreat for its owner from the raging of the world.

Inspector Horlitz leaned over to get a better look at the work of his crime scene artist. "Good work, Bentheim. That's another fine display of your talent."

Julius Bentheim looked up briefly and smiled with gratitude. He was 19-years-old and used his sketching to earn some extra money for his legal studies. On the pastel sheet of paper, he thumbed over part of the drawing he thought was less successful, and he rubbed out a small splotch of coal. First, he reached for a piece of chalk, and then a wax pencil, improving the detail. From time to time, the policemen called out length and width measures to him. He had sketched the crime scene on a 1:25 scale, and now only a few small details were missing to complete the drawing.

Soon his work was done, and now he focused on the conversation between Gideon Horlitz and the messenger from the former Grumbkow Palace, where the police headquarters were located.

The young man nodded and an excited sparkle shot out of his superior's eyes.