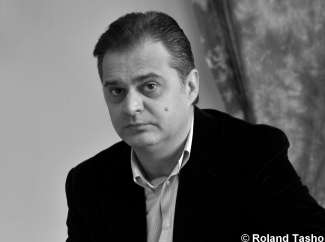 Ben Blushi was born in Tirana in 1969. He studied at the University of Tirana, graduating in Albanian Language and Literature, from Tirana University, Faculty of Philology. He was editor-in-chief of the newspaper Koha Jonë, and in 1999 embarked upon a political career in the cabinet of the Prime Minister of Albania. For several months he served as Deputy Minister of Foreign Affairs, in late 2000 he became the Prefect of Korça, and in 2011 he was appointed Minister of Education. Blushi is currently a Member of Parliament, representing the Socialist Party.

His connection to literature is both personal and familial. His father, Kiço Blushi is a renowned writer in Albania. Blushi’s talent came about at a mature age and he has been enviously prolific: four novels in five years.

In April 2008, Blushi's first novel Të jetosh në ishull (Living on an Island) was published, which turned into a phenomenal success. Indeed, within a couple of months, the book had sold over 30,000 copies, a record for the Albanian market. Blushi’s 400-page novel offers the reader a panorama of Albanian history under the Ottoman Empire from the 15th to the 18th centuries, with a broad and not uncontroversial treatment of the country’s Islamisation. His acclaimed second novel Otello, Arapi i Vlorës (Othello, Arap of Vlora) appeared one year later, followed in 2011 by his third novel Shqipëria (Albania). With the novel Otello, Arapi i Vlorës, Blushi was awarded the Author of the Year prize at the Tirana Book Fair in 2009. The three novels form a triptych of quality new Albanian literature and represent a cultural phenomenon which deserves to go beyond Albania in the forthcoming decade. In April 2014, Blushi had a book of essays published, Hëna e Shqipërisë (The Moon of Albania).

Blushi’s name and work shattered the Albanian literary scene: tens of thousands of copies sold and an unprecedented ensuing debate in the media and the literary cycles.

In the last twenty years, Blushi is regarded as the writer with the greatest number of copies per book sold.

EUPL Year
2014
EUPL Country
Albania
Otello, Arapi i Vlorës (Othello, the Moor of Vlora)
The narrative style, rich language and profound erudition contained in the novel Otello, Arapi i Vlorës place it among the most beautiful and accomplished works of Albanian literature. The book is set in the years 1300-1400, in two well-known urban centres of the Middle Ages, Venice and Vlora. The background is realistic, and the author's literary creation is tied so tightly to historical fact, it seems that these events really happened in Vlora 600 years ago, and that Shakespeare simply took the events and set them in Venice.

One of the most intriguing elements of the book are the characterisations, which have been adapted from one of Shakespeare's most famous tragedies (Othello, the Moor of Venice), but set more than 100 years before Shakespeare's birth. Othello, Desdemona, Emilia, Iago, Cassio, etc., are well-known figures in literature, but in this novel they act not only in Venice, but mostly in Vlora, interacting with many interesting characters, such as the famous doctor, Stefan Gjika, the brave lad from Vlora, Andrea, and the Turkish invader, Hamiti.

It is impossible to have Othello, Desdemona and Iago without jealousy, betrayal, intrigue, wickedness, suffering and murder, in a society immersed in unscrupulous habits and interests. The book's setting on the northern shores of the Mediterranean in two known medieval cities has inspired the author to express his ideas and feelings for the socio-spiritual relations and key characteristics of the time. But, above all, Otello, Arapi i Vlorës is a novel about love: the way it can determine fate and change the course of events, often for entire societies and eras. 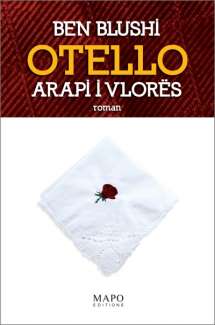