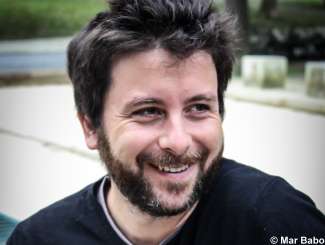 David Machado was born in Lisbon in 1978. He has a degree in economics from ISEG, Lisbon's School of Economics and Management, but soon devoted himself to writing fiction and children's literature.

EUPL Year
2015
EUPL Country
Portugal
Indice Medio de Felicidade (Average Happiness Index)
Daniel had a plan, a sort of journal of the future, written in a notebook. Sometimes he went back to rectify small things, but still, life seemed pretty easy – and happiness too. But, all of a sudden, everything changed for the worse: Portugal collapsed and Daniel lost his job. He couldn't afford to pay the mortgage for his house any more. His wife, also unemployed, left with his children, searching for better opportunities. His two best friends are absent: one, Xavier, has been locked inside his house for 12 years, obsessed with statistics and deeply depressed by the fact that the mutual aid website they created has proved a complete failure; the other one, Almodôvar, was arrested in a desperate attempt to mend his life. When thinking of his children and of Almodôvar's child, Daniel tries to understand what kind of hope is left for future generations. And he doesn't want to give up. In spite of the wreck that his life becomes, his will to rebuild everything seems unshakable. Because the Present is meaningless, if we don't anticipate a Future. 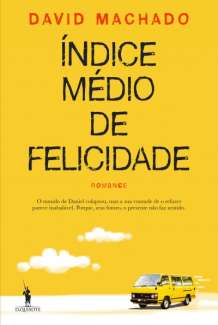 “We did something wrong,” he said.

Can you believe it? The guy was still trying to figure out the site. You weren't even here about half a year ago and Xavier was still worried about that shitty site. Because you put that into his head. You didn't shut up about the site for months. It was a foolproof idea. We were going to sell the business a year later with a 10,000% profit. We'd pay off the instalment loans, our children's education, lead a comfortable lifestyle, the whole film; and we were going to do something good, we were going to help people. I heard you talk about that so many times. I even started to believe it too. It seemed to be a great idea. To be honest, it still seems to me to be a great idea. But the truth is that we put money into it, money that I now need, money that might have stopped you from doing what you did, and we never saw that money again. And Xavier had all that work programming the site, weeks without sleeping, and when it was finally ready nothing happened. Months passed and still nothing happened. He was right: the site wasn't working. It's just that, well, for me it stopped being important a long time ago. But almost a year later Xavier was still trying to figure it out.

I didn't want to have that useless conversation, but I tried to be patient.

He closed his laptop monitor a little and his face filled with shadows. He said:

“There are people using the site. The problem is that none of those people need help.”

In short, the problem was this: we created a social network where people who need help and people who are willing to help can meet. During the first 11 months that the site was live, 26 people signed up. Of those 26, there are 14 that never wrote anything, four that write regularly explaining that they need help jerking off, wiping their ass, cutting their toe nails, etc., three that use the site to stay in contact with each other without having ever made any request for help, and one that occasionally announces their availability to help whoever with whatever may be needed, in any place and at any time, and for that reason has a nine seater van.