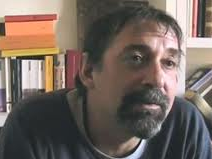 Emanuele Trevi was born in Rome in 1964. He is a writer and literature critic. Son of Mario Trevi, a Jungian psychoanalyst, he has written several papers and edited editions of the classics. He was creative director of the publisher Fazi and he also edited an anthology with Marco Lodoli.

Trevi has written many critical essays on poets and writers, including a work on the poet Pietro Tripodo which won the  Sandro Onofri Prize.

At the moment, he is working for Rai 3 Radio on the programme Lucifer. Trevi was in the jury of several literary awards and he has written for magazines including Il Caffè Illustrato and Nuovi Argomenti, and various national newspapers, including La Repubblica, La Stampa, and Il Manifesto.

EUPL Year
2012
EUPL Country
Italy
Qualcosa di scritto (Something Written)
Rome, in the early nineties. A writer in his thirties, cynical and naive, finds work in an archive, the Fund Pier Paolo Pasolini, where he meets a shrewish old woman called Laura Betti. The encounter with the mad heroine of this book, a spiritual heir of the Friulian poet, is an encounter with Pasolini himself. Meanwhile, a hidden story in Petrolio, the unfinished novel by Pasolini, becomes a guide to the disenchantment of our time and the mysteries of life. Qualcosa di scritto tells the story of a farewell to adolescence and an entire era, and explores the eternal secrets of life. 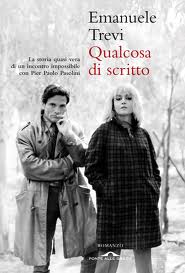 Among the many—too many—people who worked for Laura Betti at the Pier Paolo Pasolini Foundation in Rome, all of them endowed with a colorful store of more or less unpleasant memories, I believe that I can boast of, if nothing else, above-average endurance. Not that I was at all spared the extravagant daily persecution that the Madwoman (as I soon took to calling her, in my own mind) felt it her duty to inflict on her subordinates. On the contrary, I was so irredeemably odious to her (there is no more precise word) that I succeeded in plucking all the strings of her protean sadism: from the ceaseless invention of humiliating nicknames to real physical threat. Every time I entered the offices of the Foundation, in a dark, massive corner building on Piazza Cavour, not far from Castel Sant’Angelo, I sensed almost physically the animal hostility, the uncontrollable rage that flashed, like the zigzag lightning in a comic book, from behind the lenses of her big square sunglasses. The standard greetings immediately followed. “Good morning, little slut, did you finally figure out that it’s time to GIVE HIM YOUR ASS? Or do you think you can still get away with it?!? But you don’t fool ME, you sweet-talking little slut, it takes a lot more than someone like you”—and this first blast of amenities was ended only by the eruption of a laugh that seemed to come from a subterranean cavern, and was made more threatening by the counterpoint of an indescribable sound halfway between a roar and a sob. Very rarely could the avalanche of insults dumped on the unfortunate victim be traced back to meaningful concepts. Besides, as a general rule, the Madwoman detested meaning, in every form. There was no human instrument that in her hands did not become a dangerously explosive device. And language was no exception. Her tirades revolved on the pivot of an offensive epithet, savored with pleasure and constantly repeated, as if the gist of the conversation resided there, in the pure formulation of the insult. If addressed to a male, the epithet was generally feminine. Even people she liked, and admired, had to put up with this sort of symbolic emasculation. Alberto Moravia, for example, to whom she was very attached, at a certain point became “grandma,” and there was nothing to be done about it. The entire remainder of the conversation, once the insult had been uttered, was pure and simple improvisation—a Piranesian prison of malevolence and contempt, heedless of logic and syntax. “