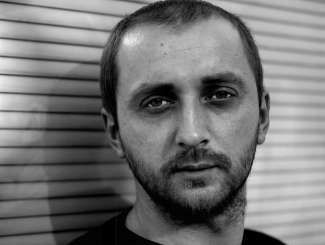 Faruk Šehić was born in 1970 in Bihac. He grew up in Bosanska Krupa, which was still part of the Socialist Federal Republic of Yugoslavia. Until the outbreak of war in 1992, Šehić studied veterinary medicine in Zagreb. However, the then 22-year-old voluntarily joined the army of Bosnia and Herzegovina, in which he led a unit of 130 men as a lieutenant. After the war he studied literature and, since 1998, has created his own literary works. Literary critics regard him as one of the most gifted young writers in the former Yugoslavia, a shining light of the so-called “knocked-over generation”.

As in Šehić’s debut, the poetry collection Pjesme u nastajanju (Acquired Poems, 2000), most of his other works include the subjective experience of the war as a focus. The prose in his short stories is sober. Without judgement, he depicts the everyday experience of war, the brutal events, but also weaves in natural observations of the soldiers. Every detail is valued, be it the death of a comrade or the sight of birds on a power line. The unsettling effect of the stories unfolds through this ironic juxtaposition. Šehić knowingly uses authenticity as a rhetorical device, saying, “my readers should hate the war.” His anti-war stories do not make the claim that they reflect the experiences of an entire generation – though possibly that constitutes the cult factor of his work. Šehić, whose oeuvre is not restricted to examination of the war, has had his books translated into English, German, Bulgarian and Macedonian.

The collection of short stories Pod pritiskom (Under Pressure, 2004) was awarded the Zoro Verlag Prize. His debut novel Knjiga o Uni (The Book of Una, 2011) was awarded the Meša Selimović prize for the best novel published in Serbia, Bosnia and Herzegovina, Montenegro and Croatia in 2011. Šehić, who lives in Sarajevo, is a member of the Writers’ Association and the PEN Centre of Bosnia and Herzegovina, and he works for the magazine BH Dani as a columnist and journalist.

The Book of Una is about a man trying to overcome the personal trauma caused by the war in Bosnia and Herzegovina between 1992 and 1995. It is also a novel about childhood on a beautiful river; about fishes, plants, swimming, diving and enjoying life in a small Bosnian city. The book covers three time periods, taking in childhood before the war, the battle lines during the war, and attempts to continue with normal life in a destroyed city and country after the war. The book is dedicated to people who believe in the power and beauty of life in the face of death and mass destruction.

The Book of Una attempts to reconstruct the life of the main character who, like the text in the book, is rather bipolar in nature: he’s both a veteran and a poet. At times, he manages to pick up the pieces of his life, but at other times it escapes him. His memories of the recent war and the killings are "dirty and disgusting", while he views his present as humdrum and his identity feels incomplete. With the help of his memories, he uses his mind and strength to look for a way out of the maze in which he is confined. He wants to be both an archivist and a chronicler of the past, which gives him the opportunity to rebuild everything again.

In parallel to this story, the book’s passages on the city next to the river Una take on mythical and dreamlike dimensions. Here, the novel expands into a poetic description of nature, seasons, flora and fauna, as well as childhood memories not yet tainted by all that will happen after 1992.

If it starts to rain the evening before Friday it's gonna rain for seven days, so our granny always told us. And the heavy rain overspread our heaven with the force of a miraculous verse of Al-Qaria surah in the Koran – the one about the end of the world.
When the water surrounded us from all sides, granny's house started on its first voyage. Before we became Unafarers we heard a strong crash, as the house tore loose from its earthly roots. Thus lightened, without the foundation in which casings and stabilizers of exploded aerial bombs from the Second World War were imbedded, without the stones from the old house which had burned down during the Allied bombing of the town, and the underlining bed of alluvial tufa, the house was making ready to endure the worst: a journey into the unknown.
The fleet of foot -- those who had not been surprised, like us, by the water – climbed up Ravnik, to the very summit of Hum, where they hoped the sun would finally penetrate the clouds and stop the deluge. We, who didn’t have much choice and who wouldn’t have wanted the whim of the weather, rather than the force of our own will, to decide the outcome, we took our fate in our own hands.
By some miracle the basement drew up into the house becoming our engine deck, since down there were red pressure gauges with little round wheels for navigating those swollen and dangerous waters, The valves on the gauges occasionally flipped up to release hot and angry steam if the engines should accidentally overheat. The grape vines unfurled from granny’s house and became a leafy sail, just in case, as back-up propulsion. I went down into the basement after we had torn open the deck with a crowbar, and got hold of little metal navigation wheels. Granny stood at the kitchen window with uncle Šeta who did his military service in the navy. She was navigating the house holding prayer beads hanging from her palm. The little marbles of her amber prayer beads cruised through their silent universe. Šeta held a trident ready in case a he caught a glimpse of the giant pike’s back.