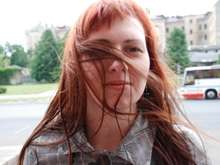 The prose writer Inga Zolude was born in 1984 and received her master’s degree in English from the University of Latvia. She studied English literature at Southern Illinois University through the Fulbright Program and worked as a project coordinator and manager in the field of culture and education. She is currently studying for her doctorate at the University of Latvia. She has been a member of the Writers’ Union in Latvia since 2010.

Zolude has had her works published in various periodicals, and her debut novel, Silta zeme (Warm Earth) was published in 2008. She regularly reviews works by Latvian and foreign authors. She has also translated poetry by Philip Larkin and Robert Crawford, among others. She received a special award from the cultural magazine Rīgas Laiks (Riga Times) in 2007. She has taken part in many literary and cultural projects and has received several grants, including the Nordic Council of Ministers’ Baltic Sleipnir Grant.

Recently, the new novel Red Children (Sarkanie bērni) has won Inga Zolude, both - the annual prize of the Writers' Union of Latvia and philanthropist and entrepreneur Raimonds Gerkens' year 2011 novel constest prize. Red Children have been published in Latvia in March 2012 by Dienas Gramata.

Inga Zolude has also turned to playwriting. Her stories and excerpts from novel Warm Earth have been translated and published in anthologies in English, German, French, Swedish, Polish, Lithuanian, Hungarian, Czech and other languages. Short story collection A solance to the Adam's Tree is going to be translated in Hungarian, Czech and Bulgarian.

While engaged in writing criticism full time, Inga Zolude is also in process of completing hers PhD in literary studies.

EUPL Year
2011
EUPL Country
Latvia
Mierinājums Ādama kokam (A Solace for Adam’s Tree (a collection of stories))
Inga Zolude's short story collection reflects on different scenes of life in urban and rural areas in modern-day Latvia. The author's rich and ripe language describes a bright and panoramic view of the past, present and future. A very specific pattern of Zolude's writing (also demonstrated in her first novel) is her skill at destroying any borders between reality and fiction, known and unknown, national and cosmopolitan. Sometimes it is impossible to guess the place or time that frame these stories, which deal with the so-called 'big subjects' at the heart of human life. Despite that, Zolude's stories strongly reflect the atmosphere of 21st century Europe, and make the collection one of the most important prose works published in Latvia during recent years. 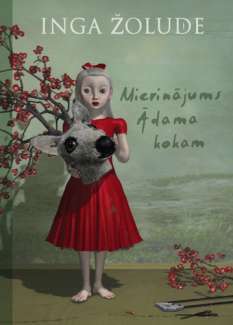 I’ve become frightened. It’s gone dark now in the park, suddenly there aren’t as many young mums or other mere passers-by, these strange looking people have appeared in their place—red-headed, freckled, looking like elves and speaking in an unintelligible language. I try to reassure myself that they’re just a creation of my fear, and I look for the exit from the park, but I can’t find it. Here at the center there’s a strange church with lights burning inside of it, while the outside is dark, dark, black, and all the doors are shut, locked, covered by grates. I walk around the church, pulling on all the doors, but nothing, some of them are practically cemented shut, until I’m startled, no joke, by the sight of two children in the sandbox at the door of the church. They’re playing in the dark, speaking in unintelligible syllables; I decide it must be one of those strange languages children have, but on listening further, I understand that it’s an actual language, and they look just like all those strangers—their hair in the air, as if blown by the wind, bright red like fire, and faces dotted everywhere with freckles. I hightailed it, racing away from this strange church, running past the crypt, sensing the smell of food cooking and suddenly I remember that I’m hungry, I’ve no idea how many hours I’ve been lost here, the night already grown dark, but my next thought is far more gruesome—they must be bums there in the crypt, bums who cook the very same innocent girls who wander into the park. I run as fast as my legs will carry me, trees racing towards me, I can’t avoid them, I run into one with my shoulder, tripped up by roots, I run stooped over, so no one will see me, until the direct hit…
--
A golden pot. A pot of gold. God’s honest word! I wake from a blackout, roots pressed into my side, head aching from the blow of running into a tree. I’m hoping that it was all a bad dream, and now I’ll get up, leave the park, and head home. Even the dark is no longer so impenetrably black, little fires burn here and there. At first I think they’re lanterns, but then I notice how the little fires glimmer rather than shine calmly, they literally flicker, then fade completely, as if the electricity had been cut off. Then the little light ignites somewhere else, begins to flicker and fades again. But I’m noticing it get closer to me each time, until it’s so close that I can see how it starts like a sparkle, and from that sparkle a flame breaks out, and a tiny little green person too, holding some sort of stone pot emitting these beams of light, then it begins to glimmer, and then it disappears: the flame, the tiny person, even the pot and its beams. And I’m left alone again in the dark, gathering up my Irish papers, rising to my feet and heading towards the road.