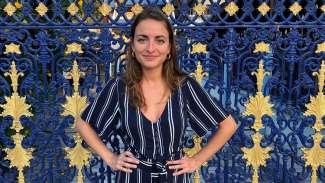 Irene Solà (born in Malla, near Barcelona, in 1990) has a degree in fine arts from the University of Barcelona and a master’s in literature, film and visual culture from the University of Sussex. Her first book of poems, Bèstia (Galerada, 2012), was awarded the Amadeu Oller Poetry Prize and has been translated into English (as Beast, Shearsman Books, 2017). Her first novel, Els dics (The Dams, L’Altra Editorial, 2018), won the Documenta prize and was awarded a grant for literary creation by the Catalan Department of Culture. In 2018, she was a resident writer at the Alan Cheuse International Writers Center of George Mason University (Virginia, United States) and in late 2019 she was selected to participate in the Art Omi: Writers Ledig House programme (New York). In 2019, she was awarded the Premi Llibres Anagrama de Novel·la for Canto jo i la muntanya balla (I Sing and the Mountain Dances). The same year, she also received the Núvol Prize, and the Cálamo Prize for the Spanish edition of the book.

EUPL Year
2020
EUPL Country
Spain
Canto jo i la muntanya balla (I Sing and the Mountain Dances)
Starting with the death of a farmer caused by lightning, the novel tells a set of stories, in which reality and fiction overlap, about the inhabitants of a mountainous area between Camprodon and Prats de Molló, two villages in the Pyrenees. Stories about mythical beings like water women, about war, about the survival of humans and wild animals, about fanaticism... but also about beauty and goodness. A narrative that emulates that of great authors of Catalan literature such as Víctor Català or Mercè Rodoreda, with an evocative and poetic style. 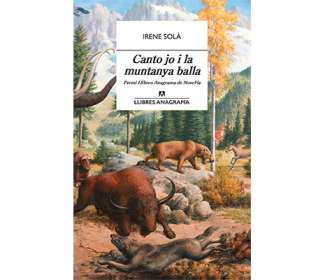 We arrived with full bellies. Painfully full. Black bellies, burdened with cold dark water, lightning bolts and thunderclaps. We came from the sea and from other mountains, and from un-thinkable places, and we’d seen unthinkable things. We scratched the rock atop the peaks, like salt, so not even weeds would sprout there. We chose the color of the crests and the fields, and the gleam of the rivers and in the eyes looking upward. When the wild beasts caught sight of us, they huddled deep in their caves and crimped their necks and lifted their snouts, to catch the scent of damp earth approaching. We covered them all like a blanket. The oak and the boxwood and the birch and the fir. Shhhhhhh. And they all went silent, because we were a stern ceiling and we decided who would have the tranquility and joy of a dry soul.

After our arrival came the stillness, and the pressure, and we forced the thin air down to bedrock, then let loose the first thunderclap. Bang! Like a reprieve. And the coiled snails shuddered in their secluded homes, godless and without a prayer, knowing that if they didn’t drown they would emerge redeemed to breathe the dampness in. And then we poured water out in colossal drops, like coins onto the earth and the grass and the stones, and the astounding thunderclap resounded inside the chest cavities of every beast. And that was when the man said damn and blast. He said it aloud, because when a man is alone there’s no need to think in silence. Damn and blast, you had to go get caught in a storm. And we laughed, huh, huh, huh, huh, as we dampened his head, and our water slunk into his collar, and slid down his shoulder and the small of his back. Our drops were cold and made him cross.

The man came from a house not far off, halfway up to the crest, by a river that must have been cold because it hid beneath the trees. There he’d left behind two cows, a bunch of pigs and hens, a dog and two roving cats, an old man, and a wife and two kids. Domènec was this man’s name. And he had a lush garden patch at mid mountain and some poorly plowed fields beside the river, because the patch was tended by the old man — his father, with a back flat as a board — and Domènec plowed the fields. Domènec had come to reel off his verses, over on this side of the mountain. To see what flavor and what sound they had, because when a man is alone there’s no need to whisper. And that evening he’d found a fistful of early black chanterelles, when he checked on the herd, and he carried the mushrooms wrapped in the belly of his shirt. The baby cried when he left the house, and his wife said “Domènec” as if protesting, as if pleading, and Domènec went out anyway. It’s hard to create verses and contemplate the virtue hidden inside all things, when the kids are crying with the shrillness of a flayed piglet that makes your heart race despite your best efforts to keep calm. And he wanted to go out and look at the cows. He had to go out and look at the cows. What did Sió understand about cows? Nothing. The calf went maaaaaaaaaaa, maaaaaaaaaaaaaa. Desperately. Sió knew nothing about cows. And again he cried out, damn and blast!, because we’d crept up quickly, hell yeah, unreliable and stealthy, and we’d trapped him. Damn and blast!, because the calf’s tail was stuck in a jumble of wires. The wires had gotten lodged between two trees, and what with all the pulling the back of the calf’s legs were shredded and gleamed bloody, open, and dirty. It went maaaaaaaaaaa, maaaaaaaaaaa, trapped by the tail between the two trees, and its mother guarded over him restlessly. Amid the downpour Domènec climbed over to the animal. His legs were good and strong from barreling up the mountain to take in some air when the kids were yelling too much, or when they weighed too heavy on him, and the plowing weighed too heavy on him, and the old man’s silence, and all the words, one after the other, from his wife, who was called Sió, and who was from Camprodon, and who’d gotten herself into a fine fix, agreeing to go up there to that mountaintop with a man who slipped away and an old man who never spoke. And sure sometimes Domènec loved her, loved her fiercely, still. But what a weight, for the ever-loving love of God and Satan, how that house weighed! Folks should have more time to get to know each other before they marry. More time to live before making children. Sometimes he grabbed her by the waist and spun her around, round and round, like when they were courting, because Sió, oh Sió, lord have mercy, those legs! He dropped the chanterelles. The calf lowed. Domènec approached the animal, leading with both his hands. Slowly, step by step. Saying things in a deep, quieting voice. Ssssh, ssshh, he said. Its mother watched him warily. Domènec’s hair was streaming water. When he got home he’d have her heat up some water to wash off the cold and the rain. He looked at the wire that cut into the calf’s legs every time it struggled. He grabbed its tail firmly, pulled out his knife and deftly cut its knotted switch. And then we let loose the second thunderbolt. Quick as a snake. Angry. Open like a spider web. Lightning goes where it wants to, like water and landslides and little insects and magpies, transfixed by all things pretty and shiny. The knife was out of Domènec’s pocket and it gleamed like a treasure, like a precious stone, like a fistful of coins. The metal blade, polished mirror, reflected us back. Like open arms, calling us out. Lightning goes where it will, and the second bolt went into Domènec’s head. Deep, deep down inside, to his heart. And everything he saw inside his eyes was black, from the burn. The man collapsed on the grass, and the meadow placed its cheek against his, and all our giddy, happy waters moved into him through his shirtsleeves, beneath his belt, into his underwear and socks, searching for still dry skin. And he died. And the cow took off in a frenzy, and the calf followed after.

The four women who’d seen, approached him. Bit by bit. Because they weren’t used to feeling an interest in how people die. Or an interest in attractive men. Or ugly men, for that matter. But the scene had been captivating. The light so bright and clear that it was enough for a lifetime of seeing. The knife had called to the lightning, the white lightning had hit the man’s head like a bull’s eye, it had parted his hair right down the middle, and the cows had fled in a frenzy, like in some comedy. Someone should have written a song about the man’s hair and the lightning comb. Putting pearls in his hair, in the song, white like the gleam off the knife. And say something about his body, and his open lips, and his light eyes like a cup filling up with rain. And about his face, so lovely on the outside and so burned on the inside. And about the torrential water that fell on his chest and rushed beneath his back, as if it wanted to carry him off. And about his hands, the song would have spoken, stumpy and thick and calloused, one open like a flower expecting a bee, the other gripping the knife like a rock swallowed by tree roots.

One of the women, the one named Margarida, touched his hand, partly to find out if the man was burning with the thunder-bolt inside him, and partly just for the caress. Then the women left him be and gathered up the soaking wet black chanterelles he’d dropped, and abandoned the scene, because they had many other things to do, and many other things to think about. Then it was as if their satisfaction was contagious, and we stopped raining. Sated. Dispersed. And when it was clear we were done, the birds hopped out to the middle of the branches and sang the song of the survivors, their little stomachs filled with mosquitoes, bristling and furious with us. They had little to complain about as we hadn’t even hailed, we had rained just enough to kill a man and a handful of snails. We’d barely knocked down a single nest and we hadn’t flooded a single field.

Then we retreated. Dog-tired. And we looked at our work. Leaves and branches dripped, and we headed off, vacant and slack, somewhere else.

Once we rained frogs and another time we rained fish. But best of all is the hail. Precious hailstones fall on towns and skulls and tomatoes. Round and frozen. Covering terraced walls and paths with icy treasure. The frogs fell like a plague. The men and women ran, and the frogs, who were eensy teensy, hid. Alas. The fish fell like a blessing on the men and women’s heads, like slaps, and the people laughed and lifted the fish up in the air as if they wanted to give them back to us, but they didn’t want to and we wouldn’t have wanted them back anyway. The frogs croak inside our bellies. The fish stop moving but don’t die. But whatever. Best of all are the hailstorms.