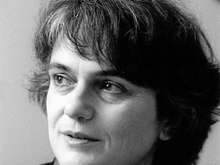 Iris Hanika (b.1962) was born in Würzburg and grew up in Bad Königshofen. In Berlin, where she’s been living since 1979, she studied Universal and Comparative Literature. She wrote her first book in the summer of 1989. Since 1998, she has been reviewing political books for the national newspaper Frankfurter Allgemeine Zeitung. She was one of the first freelancers to work on the Berlin Pages, a daily supplement for the German capital in the Frankfurter Allgemeine Zeitung. From 2000 to 2008, Hanika wrote a chronicle for the magazine Merkur. In 2006, she was awarded the Hans Fallada literary prize for all of her work, and in 2011, she was awarded the prize of the LiteraTour Nord for her novel "Das Eigentliche."

EUPL Year
2010
EUPL Country
Germany
Das Eigentliche (The Bottom Line)
To Hans Frambach, what matters most are the crimes of the Nazi-era that have made him suffer since he can remember. It is because of these concerns that he chose to work as a registrar in the Institute for History Management. To his best friend Graziela too, it is the inconceivability of the past that matters – that is, until she meets a man who covets her. From then on, carnal desires take precedence. As the story progresses, it deals with the extent to which history plays a role in their lives. Can one hold the Nazi past responsible for everything? Is it not simply their inability for happiness that makes Hans and Graziela such strange figures? Iris Hanika shows how the crimes of the Nazi-era still keep a hold on Germans today, while also examining the absurdities of professional commemorations and our helplessness in the face of these crimes. 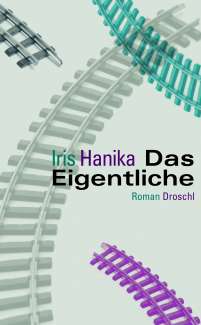 Institute for the Management of the Past, held his plastic employee-card against the card-reader next to the entrance till he heard a soft click, opened the door to the archive and stepped into the familiar reception area, a cube of cold light. The neon tubes, humming gently to themselves on the ceiling, illuminated every inch of the room and lent an icy shine to Frau Kermer’s groomed, blonde hair, which flowed down to her elbows. She made sure her hair remained motionless at all times and sometimes looked like a statue, a gleaming Greeting Buddha. But mostly like the dragon defending the cave. Or the guardian of the grail. And sometimes like the beast of Buchenwald. He turned the corners of his mouth up in a manner which could be interpreted as a smile. In fact it had to be interpreted that way. He observed social mores rigorously and turned up the corners of his mouth for this exact reason; this was the way a human being smiled. ‘Good morning, Frau Kermer,’ he said, and turned straight to the coat stand, the corners of his mouth immediately dropping back where they belonged. While he hung up his coat with the utmost precision, Frau Kermer wished his back a good morning. He inserted a hanger into the coat’s shoulders so that it hung with perfect symmetry upon it and returned the hanger to the rack, taking care that his coat hung as freely as possible, barely touching the coat stand and certainly not Frau Kermer’s coat, already hanging there. He bent down, took his briefcase from between his gripped legs and held it against his belly with his left arm, then ran his left hand through his hair as he straightened himself. Frau Kermer had clearly been watching throughout; as he turned to go, she flung a grappling hook after him. ‘Herr Frambach!’ She wrenched him back, he briefly lost his balance and, as she began to speak, he was unable to prevent himself turning the corners of his mouth up again. It happened automatically. ‘Herr Marschner has requested that you be available from half past eleven onwards. He has something to discuss with you.’ Frambach nodded. ‘When does he arrive then?’ he asked, in order to make conversation and give the corners of his mouth a rest. ‘Around eleven,’ Frau Kermer said. Frambach nodded again. His smile, which Frau Kermer had not reciprocated, was digging deeper and deeper into his face and now hurt. Marschner knew of course that it was highly unlikely he would fail to find Frambach in the institute any time within core working hours; after all he sat at his desk faithfully from dawn till dusk each day feeding one paper after another into the archives, and never had external engagements.