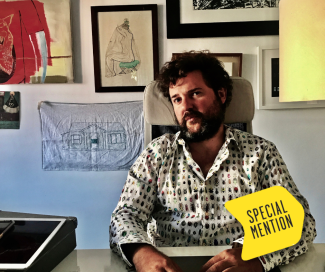 Jacobo Bergareche (London, 1976) abandoned his Fine Arts studies in Madrid to study Literature and Writing at Emerson College in Boston. He combines writing with his work as a producer and scriptwriter of series. He is author of the poem collection Playas (2004), the play Coma (2015), the series of children’s books Aventuras en Bodytown (2017), the autobiographical novel about his brother’s murder Estaciones de regreso (2019) and the novel Los días perfectos (Libros del Asteroide, 2021). He lived in Austin, Texas, for four years, and was able to conduct research into the private correspondence of various writers at the Harry Ransom Center; Perfect Days (Los días perfectos) is one of the fruits of that research. He lives in Madrid with his wife and three daughters.

EUPL Year
2022
EUPL Country
Spain
Los días perfectos (Perfect days)
Luis, a journalist who’s tired of his job and his marriage, is planning to attend a conference in Austin, Texas. The trip is merely an alibi to cover his meeting with Camila, who has become the only thing that motivates him in his life. But just as he is about to leave, he receives a message from her: “It’s over but we’ll always have our memories.” Heartbroken and at loose ends in Austin, he takes refuge in a university archive, where he happens upon the letters William Faulkner wrote to his lover Meta Carpenter. Reading the correspondence helps him to reconstruct his memories of his own love affair and to reflect on his tedious marriage, but also to wonder how one should live to make every day count. With much truth and humor, and an enormous narrative skill, Jacobo Bergareche will draw readers in with this unique and captivating novel that explores the universal nature of both the ardor of falling in love and the inevitable routine of long-term relationships. A book of exceptional solidity and originality that proves Bergareche is an author who has come into his own. 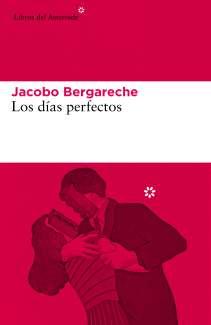 Translated from Spanish by Andrea Rosenberg

I have now reigned above fifty years in victory or peace; beloved by my subjects, dreaded by my enemies, and respected by my allies. Riches and honours, power and pleasure, have waited on my call, nor does any earthly blessing appear to have been wanting to my felicity. In this situation, I have diligently numbered the days of pure and genuine happiness which have fallen to my lot: they amount to fourteen.

I’m realizing now that over the past year, the most real and recurrent moments of happiness in my life have been what Carmen, my youngest, calls war. She often demands this brief ritual of simulated combat before bed. She’ll glare and fling her legs and arms at me, her menacing movements inspired by some martial art she probably saw during recess at school; I’m supposed to catch one of her flailing limbs in midair, pin her, flip her in a somersault in my arms, and toss her onto her bed. Then she tries to get up and I’m supposed to prevent her, aggressively, pushing her forehead back as she struggles to sit; she collapses onto the pillow and tries to get up again, and I thrust her down once more. Then I grab her by the ankles, roughly turn her over onto her belly, and once she’s facedown, I tickle her until she tells me to stop. She holds out as long as she can before finally giving in, howling and laughing. Sometimes something goes wrong and she smacks me in the nose hard enough to hurt, or I scratch her with my fingernails and leave a mark, or she crashes into the wall and ends up in tears. But on most nights she wants more, demanding that we repeat the somersault, the ankle flip, and the tickles on the soles of her feet, and she haggles with me, telling me that if we don’t drag the war out longer, she won’t give me a kiss goodnight; she knows my days don’t end right without her parting kiss before sleep.

Some days I’m not home when Carmen goes to bed, and on others I’m so tired that I’m not confident I won’t end up breaking her neck or losing my grip on her ankles as I carefully toss her through the air. Often on those days, I torture myself with the possibility that there will be no more wars, that without knowing it I’ve missed my last chance for a war with Carmen, and tomorrow she won’t want one, nor the day after, and suddenly she’ll be all grown up and won’t be into roughhousing or tickle-induced fits of laughter, and will no longer be interested in selling her goodnight kiss at astronomical prices, and instead will give it away just to be rid of me. Because just as, one day about a year ago, she started asking for a war before bed, there will come a day when she stops asking for it, and though I try hard to show up for every war, I know that inevitably the last one will arrive, and that I won’t recognize it as such (unless the end is brought about by some calamity, like if she dies from hitting her head on the corner of a table, a turn of events that I’ve sometimes imagined, since, sadly, everything that can conceivably happen does end up happening to somebody at some point), until night after night we miss our standing appointment, because I’m traveling, or she’s at summer camp, and time piles up on our wars, and she grows up and I grow old, and our wars become just a happy childhood memory and finally harden into an exact, unchanging number, the number of wars we had: a first one, many more, and then a last one. The number will always be unknown to us, because we don’t keep track of our wars, but that doesn’t mean I’m able to forget that the number is exact—that there was a first ritual and, sooner rather than later, another will arrive that will be the last.

This doesn’t just happen with Carmen’s wars; it happens often, with everything I love doing again and again. Many times, saying goodbye after a Sunday lunch with my mother, it has occurred to me that it might be the last; many times I have left on a trip and kissed my three children, and once they’re out of sight I’ve wondered whether that was the last kiss, because the plane might crash, or they might die in a bizarre fire sparked by the humidifier my wife believes prevents children’s coughs and in which I put no more stock than in an herbal remedy. And it also happens with you—yes, it’s been happening since the first time I kissed you, since I went to bed wanting that first improbable, unexpected kiss not to be the last, and the next day, when you gave me the second kiss, I began keeping track of every kiss we exchanged during the three days of our first encounter. In the period before we saw each other again, I spent many nights doing battle with the ghost of the last kiss, resisting the idea that the kiss I’d inattentively given you had been the last one, and now everything was over, the curtain had fallen, the audience had gone home, and I was still in my seat, waiting for the intermission to end. When, a year later, we returned to the scene of the crime and you gave me that kiss in the airport before I could even tell you I’d spent the entire flight planning what I’d say when I saw you again, I relaxed and finally stopped counting; I lost my fear of finitude, I convinced myself that this would be repeated each year, the last kiss seemed to be nowhere in sight, it faded into a distant future.

I’ve wasted far too much time tormenting myself with anxieties that darken my mind like a swirling mist every time something reminds me that all the things I do not wish to lose had a beginning and will one day have their end. I try to evade that barren thought before a detailed picture of a final instance can take shape in the fog of my consciousness, and before I then get caught up in contemplating it and can no longer shield my spirit from its impact.

And so, now that I happen to be holding a folder containing the correspondence of a famous writer to his lover—both of them long dead—I feel an awful pang: I can see the first letter of a love story peeking out at the beginning of this folder and, at the same time, the final letter at the end, and I can’t help trying to estimate how many pages lie between the two, the first letter and the last, and tallying at each point how many letters are left in the relationship before it fizzles out. The extant accumulated evidence of the romance is less than a quarter-inch thick, and fits in a space some ten by fifteen inches, the approximate size of the ivory-colored folders into which the letters from container 11 of the Harry Ransom Center’s William Faulkner collection are filed, and with which I am killing time this morning, and with which I suspect I will fritter away the entire day, and the days to come, until I forget the reason for my visit—now no longer of any interest to me—altogether. The papers are tantalizing. I happen upon them, as I said, by chance, and in them I discover a possibility of finding answers; I read them eagerly, like a teenager reading a magazine advice column. Yet, seeing the folder provokes a barrage of new questions. What were its dimensions; how long and how wide did our thing (let’s just call it our thing, for lack of a better term) stretch? What mark has it left, what residue, what ashes? There is no memory of it. I deleted everything, absolutely everything, and I know you did too. All I know is that last year I saw you for four days on these same dates, in this same city, and that the previous year I saw you another three days, on the same dates and in the same city. Saw you doesn’t really capture it. I had you; you had me. We had each other.