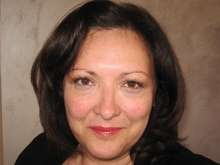 Jelena Lengold (b.1959) is a storyteller, novelist and a poet. She has published five books of poetry, one novel (Baltimore, 2003, 2011) and four books of stories, including Pokisli lavovi (Rain-soaked Lions, 1994), Lift (Lift, 1999) and Vašarski mađioničar (The Fairground Magician, 2008, 2009). She has been represented in several anthologies of poetry and stories, and her works have been translated into several languages. Lengold worked as a journalist and an editor for ten years in the cultural department of Radio Belgrade. She worked as a project coordinator in the Conflict Management programme of Nansenskolen Humanistic Academy in Lillehammer, Norway. She teached about topics such as dialogue, interethnic tolerance, discrimination, negotiations, human rights and peaceful conflict resolution. She lives in Belgrade.

EUPL Year
2011
EUPL Country
Serbia
Vašarski Mađioničar (Fairground Magician)
The Fairground Magician tells stories about love fulfilled and unfulfilled, about things that are visible in the everyday world and about values that are perceptible only in exceptional moments. The narration assumes various forms, from apparent realism to various other genres, such as crime fiction, thrillers and erotic prose. Depicting the inner conflicts of her protagonists, Jelena Lengold often creates intertextual dialogues with similar characters from global literary history or with recognizable symbols of modern culture. Memories, intimations and premonitions are in these stories infused with a tranquility that accepts destiny, even when efforts are made to change it, like in the stories ‘Pockets Full of Stones’ or ‘Downfall’. In addition, eroticism as a natural ingredient of human life, as an integrated tension consisting of two inseparable sides – body and soul – energise stories like ‘Love Me Tender’, ‘Fairground Magician’, ‘Zugzwang’, Wanderings’, and ‘Aurora Borealis’.

In The Fairground Magician, Lengold is a lucid observer of minute details and subtle emotional shifts. In stories like ‘It Could Have Been Me’, ‘Shadow’, or ‘Ophelia, Get Thee to a Nunnery’, she manages to vault the wall between the bodily surface and the human interior in a very distinctive way. No matter how common are the situations she depicts - whether it be the motives of forlorn lovers, broken marriages or unfulfilled expectations - Lengold is in a constant search for the authentic, finding it within sophisticated irony, a distinct trademark of her fiction.

The woman shouted joyously:
- Hey, there's Lola!
- I told you he'd come back - a voice replied from inside the house.
- He always comes back.
The man came out onto the threshold and held out his hand to take the dishes that his wife was carrying. He smiled at her:
- Tomcats always come back for their slice of meat, you should know that much about us.
She responded with one of those smiles the full meaning of which is understood only by people sharing the same bed. They both stood there for a while, as if in a freeze-frame, watching their big yellow tomcat. He was finishing his meal loudly and voraciously. Then, presumably feeling full up, he turned abruptly away from his bowl and started licking himself meticulously. He licked his paw first, and then slid it over his entire lithe body. He contorted impossibly, managing to touch even the remotest parts of his back, belly and tail with his tongue.
- He looks OK - the woman said.
- He appears to be in one piece, his ears and eyes are all in place, his tail is intact, Mr Lola seems to have got away with it this time as well.
- Why, of course - her husband said entering the house.
- You worry about him too much. I'll make us some coffee.
The woman went back to the table, in the shade of the tall linden-tree. It was a warm April day. There were tulips and narcissi all around, it was their time to bloom. She looked at the bushes that needed pruning, the places that seemed to lack a flower or two, then she looked at Lola again, who was lying quite peacefully now on a worn blanket, blinking at her with his yellow eyes. She knew he would fall asleep soon and sleep for hours. It always happened like that. People never slept so peacefully, she thought with a little envy. Not even while they were children. Even then, all sorts of monsters appeared in their dreams. But Lola slept without a worry or care. One could see him breathe, the rhythmic up-and-down motion of his belly. Occasionally, one of his ears twitched away a fly or some insect. Sometimes, without opening his eyes, he stood up, arched his back, changed his position and went on sleeping. And that was all. He had no worries. He did not think about what had happened the day before, had no plans, was not plagued by envy, did not have any ambitions, felt no apprehension. And who knows, she thought, maybe I am wrong, maybe he does have some tomcat worries of his own? Still, it seemed highly unlikely to her. Asleep as he was, Lola seemed the perfect image of absolute calm. Full up, licked clean and carefree. Perfectly safe in his own yard. She wondered whether he knew at all what safety was. Or perhaps he knew only fear, at the moment when lie felt it.