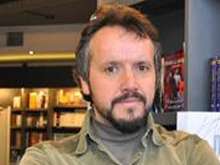 Kalin Terziiski was born in 1970 in Sofia. He graduated from medicine at the Medical Institute in Sofia, and for four years worked as a psychiatrist in the second largest psychiatric hospital in Bulgaria, the ‘St. Ivan Rilski’. However, he says, “because young doctors were receiving very low wages, making it hard to live”, he started writing for newspapers and magazines. During this time, he wrote a series of stories and cutting-edge alternative texts for magazines.

At the beginning of 2000, he quit his job as a doctor and devoted his whole time to writing, working as a writer for television and radio, and writing collections of short stories between 2007-2010. He also took part in literary evenings and, in 2006, he became a member of the literary alternative club ‘Litertura dictatorship’. His brother, the writer Svetoslav Terziiski, is also a member of this club. Kalin is а very talented author in the field of new Bulgarian literature.

EUPL Year
2011
EUPL Country
Bulgaria
Има ли кой да ви обича (Is there anybody to love you - short stories)
This collection incorporates 16 short stories. The book conveys the author’s knowledge of modern cities, containing a subtle sense of humour and depicting larger than life characters. The young author turns life into a new narrative reality, into a new writer’s philosophy. His stories relate to the mysteries of life in the urban space. But the big city in the book is not one we would know so well. It resembles a city in a fairy tale – filled with secrets and drama. It is a big city that offers very colourful theatrical decors, against the background of which deep and strange human drama develops.

For example, the short story ‘Love’ is about the unacceptable love that a university teacher has towards her student – a pretty but unapproachable young man, who only looks unapproachable because everyone else thinks he is. The story unfolds in a microbiology lab where the teacher works. Out of despair, she decides to poison this young man. In the end, in a bizarre twist of fate, she finds out that he also loved her…

Another story, ‘Collector of Values’ is about a poor man who collects waste from the streets that only he, his eyes unburdened by social prejudice, can see the true riches of.

He discovers a small bundle of discarded love letters, which become a real treasure to him. The short stories of Kalin Terziiski are an attempt at establishing a new tradition in Bulgarian prose: a tradition of humanistic and poetical urbanism. 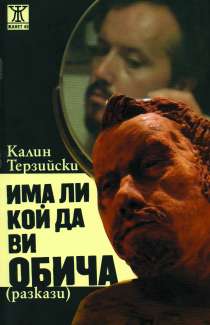 While I’m walking along Ivan Assen Street, together with my daughter, I’m taking a survey of the buildings. The buildings of Sofia are ugly because they are too old and their old age doesn’t dignify them but only ruins their coats.
That’s why I’m walking, watching everything as if it’s nothing. It’s difficult to achieve, but everyone does it unconsciously every day.
‘Maybe you want some pizza?’
‘M-mm, yes…,’ my daughter answers drawlingly.
I become irritated when she looks aside, dreaming in some girlish trance of hers. She’s roving. And I’m the same. She’s watching everything as if it’s nothing, as well.
‘But you’re going to eat it, aren’t you?’ I ask her while I’m pulling her hand.
‘М-mm, yes…,’ then she’s watching through the invisible space again, still dreaming.
I know perfectly well this dreaminess – when you don’t think, feel, see or hear. You are just alive; something like an easily reached, children’s Nirvana.
We are walking towards a pavilion where pizzas are sold, I'm being careful so a car doesn’t hit us; my daughter has dropped her hand in mine and she’s slightly walking into my legs, because she just doesn’t watch where she’s going.
And I, while I'm being careful a car doesn’t hit us, I’m thinking about childhood. I wonder whether I felt good when I was a child, whether I felt something at all, whether I was constantly experiencing this mixture of guilt and the irritation of constantly pressing duties? Of course not. Ever since I grew up I felt such things. But as a child I probably felt some childish, silly things.
My daughter startles and pulls my hand, because a big dog passes by her. Now I’m dreaming.
‘Where are you looking …? As if you were a baby! You’re supposed to be an adult.’ she’s pulling my hand.
Yes, I’m an adult. That’s so sad! But it seems to me that I was sadder as a child. I pretty clearly understood that I was dependent on everything and everybody; and that all true pleasures were hidden from me – in the wardrobe, under lock and key – from a strict mamma.
I think I grew up in order to get rid of my childhood.
‘Daddish (who knows from where she invented this Hungarian name and titled me)…we’re here. What do you think?’
‘Nothing, daddy thinks nonsense.’