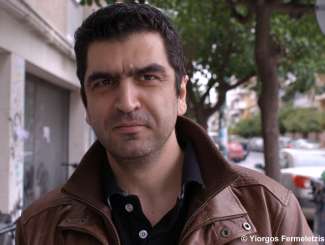 Makis Tsitas was born in Yiannitsa in 1971.
He studied journalism in Thessaloniki and has worked in the radio industry.
He has published a collection of short stories, Patty from Petroula, (Kastaniotis, 1996) and fifteen books for children. His short stories have been translated into German, Spanish, English, Hebrew, Swedish and Finnish. God Is My Witness, (Kichli Publishing, 2013) is his first novel. He lives in Athens and is the director of literary and cultural journal, diastixo.gr.

EUPL Year
2014
EUPL Country
Greece
Μάρτυς μου ο Θεός (God Is My Witness)
God Is My Witness is a hilarious and poignant portrait of the ills and contradictions of Modern Greek society as seen through the eyes of a deeply-flawed yet lovable anti-hero.

Chrysovalantis, a fifty-year-old man who has recently lost his job and struggles with declining health, sets out to tell the story of this life. Deeply religious, naive and emotionally immature, he has been falling prey to vicious bosses, ruthless women and the cruelty of his own family all his life. His evil boss enjoys nothing more than torturing and abusing him, the women of his life only wants him for his money and his father and sisters –who he still lives with- scorn and belittle him. A bundle of contradictions, Chrysovalantis is a misogynist who adores women, a timid creature who fears and dislikes foreigners, a pampered middle-aged boy who longs to be a man and a tragic hero with a crackling sense of humour.

Gradually abandoned by everyone, Chrysovalantis will roam the streets of Athens for one last time on Christmas Eve with nothing but a suitcase in hand, his half-dying figure reflecting the monstrosity of a cruel society that must inevitably exclude him.

In God Is My Witness Makis Tsitas paints a hilariously funny and achingly sad portrait of Greece’s charms, ills and contradictions whilst paying tribute to all the tragic and lovable anti-heros of our decadent and cynical world. 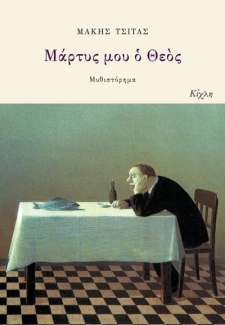 There are four kinds of employer: successful ones, debtors, losers, and the insane. I got the fourth.

Often he spoke to me and I wondered if he knew it was me standing there or someone like me. Was I actually Chrysovalantis – his employee and friend – or my twin brother? Except I have no twin brother, just two sisters.

If ever we met in the lobby at work, he would tell me to “run up and get there first!”, then he would make a dash for the lift and shout “no cheating!” as it went up, and force me to run up eight floors counting the 144 steps out loud, while he yelled at me from inside the lift: “Run faster fatty! Where’s your get-up-and-go?”

His company closed at the end of 1980, and out of the blue I was jobless. I had been with him for 11 years, but sadly I was caught unawares, though my colleagues had been busy doing their own marketing for months and went straight on to work for other graphic designers. Naturally, I saw that the ship was going down, that things were going from bad to worse, that there was no future anymore, but I didn’t want to believe it. Old Nick was telling tales and I fell for it: “Let them all go, there’s no way you’ll be out of work.” That’s where I screwed up.

I saw myself grappling with myself in the mud. The two of us were swearing and trying to strangle one another. While simultaneously chanting the Hymn of Kassiani.

Then the two of us became another Chrysovalantis, a different one, whose name was Psychovalantis, and he shouted thrice, “this wind is choking me.” While from somewhere in the distance could be heard an aria from Tosca.