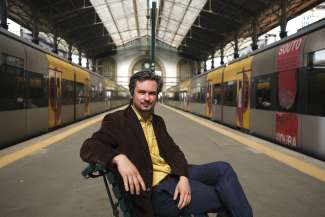 Maxim Grigoriev, born in 1980, is an author, critic and translator from Russian into Swedish. He was born in Moscow, Russia, where he grew up until he moved to Sweden as a teenager. He made his debut with a collection of short stories, Städer (Cities), which was awarded the esteemed Borås Tidning Prize for debut authors. In 2016, he published his first novel, Nu (Now). He regularly writes for the Swedish magazine Axess and for Svenska Dagbladet, the second largest newspaper in Sweden. Grigoriev has also translated Russian authors such as Olga Slavnikova and Venedikt Yerofeyev into Swedish. He has previously lived in Berlin and Porto but currently resides in Paris with his wife and their two children.

EUPL Year
2021
EUPL Country
Sweden
Europa (Europe)
When Nikita was 14 years old, he escaped from Moscow to Paris. Now he is a middle-aged man, overweight and exhausted. On the balcony of a stranger’s apartment in Nice, he stands looking out over the winter sea. Nina was his only friend. In the emigrant’s pessimistic consciousness, the timelines intertwine. The city becomes a mere memory. The romantic dream of a cosmopolitan Europe slowly falls apart, while the city of his childhood, Moscow, becomes increasingly attractive and shimmering. Maxim Grigoriev’s Europe is a new kind of novel about exile, a reckoning with nostalgia and homesickness. It is also a hate-filled hymn to the centuries-long history of Russian emigration, with the misanthropic graphomaniac, philosopher and failed terrorist Nina at its centre. 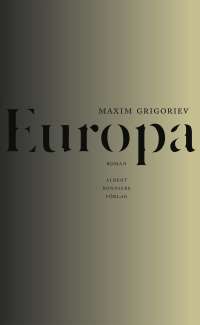 Translated from Swedish by Ida Hattemer-Higgins

I don’t know. Now, despite the rain, the seven windows are open. A stale smell hit me as I unlocked the door: a sweet mixture of furniture polish, wet wood, dust, and mold.

It was bright in the hall. I closed the steel-reinforced door behind me and put the keys down on a narrow bureau next to a stack of letters and junk mail. The light came streaming through the glass windows of a double door directly in front of the entry. Behind these doors was a spacious room with high ceilings and three arched windows. The triangles of the herringbone parquet pointed out towards the promenade and the sea. The golden parallelograms of evening sunlight penetrated the floating dust, and came to a stop just before they touched the opposite wall. Against this wall was a dark cabinet with glass doors. Between the bookshelf and the windows a round table of dark oak stood, with a matching set of four chairs inserted beneath it and a green lamp in the middle. Otherwise, the room was empty. In the window panes, a painful, azure-blue nothingness burned.

Deux pieces, the lawyer had said. I left my attaché bag on the table and went back out to the hall. The dried-out parquet creaked at each step. To the right of the front door, or to the left when you entered, was the kitchen. A small corridor, with two more doors, turned off in the other direction.

In the other room, a smaller one, the shutters of the windows were closed. It was a corner room, likewise facing out toward the beach promenade on the front, and to the stone stairs that ran along the short side of the house on the side. The same diagonal streaks of sun, but cut up into dots, ran across the floor and bisected a large old double bed, as if to strike it out. In the corner between the windows there was a chair; by the bed: a chest of drawers with a white lace cover and an old-fashioned wardrobe in light lacquered wood, maybe teak. At the foot of the bed, a set of neatly folded sheets, to judge by the plastic packaging under them apparently taken from a dry cleaner, were laid out at a diagonal to the bed’s rectangle, at the same diagonal as the parquet and the rays of light.

I looked at the bed for a moment, felt the thick white cotton bedspread with my hand, and then went back out into the hall.

When I opened the door opposite the bedroom, a damp coldness struck me, along with a suffocating odor. I took a step back.

It was dark inside.

I turned on the light switch, but nothing happened. I picked up my phone, and shone it in front of me. I jerked with a shudder. In the cold artificial light hitting the far corner was a bathroom with walls flaked and deformed under white and gray-green boils of mold. In the corners and around the bathtub, black mold spread. A white dresser next to the sink had turned gray under a thin layer of dust-like mold. The upper part of the mirror had been struck by crystal formations that resembled gray-green salt. The narrow window on a lightless air shaft stood open.

I got a stuffy nose, felt my eyes water and my throat turn dry.

I closed the door and coughed into my sleeve; went back to the living room and opened one of the double windows.

The French windows led out to a balcony, narrow but real. I stepped out, leaned against the railing and breathed in the wet, wide-open sea air. With my hands on the balcony railing, warm from the evening sun, I looked straight out to sea. Down on the empty Quai des États-Unis, a car was moving. A man crossed the road at a diagonal. A clarinet player was packing up. It was evening in Nice, but still light; the sun was setting over the airport’s distant control tower.

The balcony was empty, except for a small, round metal table. In a white crème-fraîche jar, filled with dirt, stood what had once been aa former rosemary plant.

I went back inside and opened all seven windows: their locking mechanisms were old and pleasant, heavy fittings and handles made of white-painted cast-iron. The rooms became even brighter. Grime marks from years of rain were visible on the window panes.

I went back to the hall and looked into the bathroom. To the left of the door was a clawfoot cast-iron bathtub. The tub itself seemed to have been spared, but when I shone a light over it, I saw that the wall above was covered by a painting depicting a palm tree in shades of deep green. A large patch of mold, with the contours of a hot air balloon, had settled over the palm.

I closed the door, listened for the click of it shutting completely, and returned to the main room. I stood perplexed in the middle of the room, looking out toward the sea.

Far away inside me, beyond my inner horizon, a wave of noiseless sadness rose up, then ebbed out.

I turned and looked at the cabinet, at the rows of yellow and yellow-grey spines behind the old glass that here and there warped the interior.

I stood looking at them, without thinking about anything, my hands in my pockets.

Suddenly the strips of light disappeared, as if someone had turned the lights down with a dimmer. I turned to the windows. The sunlight returned after a short while, like the ambling touch of a child's fingers, and then disappeared for good. Coolness blew from the street.

I went to the kitchen. Black mold had also formed in the closed refrigerator, but there was nothing inside to rot; the only thing left was a half-empty bottle of Ukrainian dessert wine on the shelf of the door. I went to the hall again, and immediately identified a black electrical cabinet with ancient fuses. I gathered my courage and pulled the switch - it offered little resistance, like an old mechanical toy that needs cranking – and the dizzy hum of the refrigerator could be heard from the kitchen. In the already bright living room, the green shade of the library lamp shone.

I poured the wine and went back to the living room, pulled out the chair nearest the window, sat down with my back to the ocean and looked down at the table.

In front of me was the display cabinet, filled with white, beige, and grey spines of books.

A fresh, cool breeze blew in now and then from the open windows, brushing the back of my neck.

I sat for a while, my hands on the surface of the table and on the small glass in front of me.

The room was filling filling up with the scent of sea and and gasoline, with autumn leaves  and cold.

I went out on the balcony again and turned my face to the soft ocean wind. It hit my cheeks, and touched my lips. The soft autumn breeze brushed my face and the soft clean cold filled my lungs.

I looked out over the sea and the clouds, closed my eyes, looked out again.

It was the fourteenth of November.

The rain was just getting started.