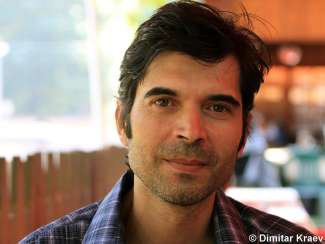 Milen Ruskov (b.1966) is a Bulgarian writer and translator living in Sofia. He graduated in Bulgarian philology at Sofia University in 1995. After that, he was a PhD student in linguistics at the Bulgarian Academy of Sciences. Since 2001, he has worked as a freelance translator from English for various publishers.

EUPL Year
2014
EUPL Country
Bulgaria
Възвишение (Summit)
In Turkish-ruled Bulgaria, the year is 1872, a feverish period of revolutionary committees, raids on Turkish cash-convoys, brigand freedom fighters and a quest for knowledge and identity, known in history as the Bulgarian Revival. This is a time of passionate self-education and allegiance to the great cause of ridding Bulgaria of its oppressors. The pretentious pomp of revolutionary ideals is filtered through the consciousness of two lads, the earnest semi-educated Gicho and his credulous kleptomaniac companion Assen. They set out armed with guns and books from the town of Kotel to join a band of brigand-revolutionaries in the mountains. Their characters reflect a mixture of down to earth brigand ruthlessness and revolutionary idealism, while their adventures form a rich comic pageant, enlivened by Gicho’s well-meaning attempts to educate his companion. Once they have joined the brigand band, they take part in the robbery of a Turkish tax-wagon convoy at the Arabakonak Pass – an event that marks the turning point in their tragicomic adventures. This robbery, notorious in Bulgarian history, provoked an effective and harsh reaction from the usually corruptible Turkish authorities, leading to mass arrests and the crushing of the Internal Revolutionary Organization. Our two characters, encircled in the mountains by the Turkish army, now face a dilemma which puts their personalities to the test. They make different choices, but both meet the same end.

The narrative is conveyed in Gicho’s words – a rich, crude Renaissance language which demands to be read out loud. His character combines a modern curiosity about the wider world with traditional peasant instincts. The resulting internal conflict is comic and revelatory in turns. The novel daringly blows away all the patriotic clichés normally associated with this serious subject, without underestimating thе desperate heroism of the times. 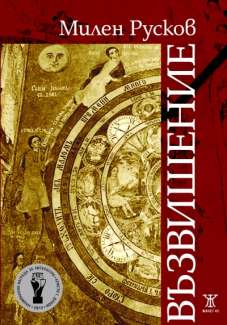 Context: The novel is set in 1872. Revolutionary committees have been set up throughout Bulgarian lands to prepare the people for revolution against their Turkish oppressors. It is a time of passionate self-education – known in history as the Bulgarian Revival. Two lads, Gicho and Assen, armed with guns and books, set out from Kotel to join a band of brigand-revolutionaries in the mountains. Their characters reflect a mixture of down to earth ruthlessness and idealism. Their waves of extreme optimism and pessimism speak to an ambivalent contemporary Bulgarian consciousness – resulting from still feeling exiled on the outskirts of Europe.
Next day in the town of K. we were stopping at an inn to sleep. And there’s a Frenchie there, boys. Who can tell what wind has blown him here? The innkeeper makes out he’s some kind of engineer.  I give the Frenchie the once over – he’s a well-made bloke, with proper European clothes, a long coat to his knees, and a tie round his neck, striped gold and black, he’s carryin’ a bowler hat in his hand, his trousers are pinstriped in silver and grey, his shoes are shining like the sun. Friends! It’s real elegance! It’s not half fine being a European – I tell you truly. When I’m looking at him, like this, my eyes are hanging out – I say to myself, I’d like to be dressed like him, up to the nines, so I’d come out looking like a human being in front of other human beings, not like some grubby oriental vassal, ruled by Abdul Aziz the Sultan. A-ah, I say to myself, life’s not fair.

I learnt – or informed myself as they say in French lingo – that this Frenchie worked for the so-called Austrian Railways, finding out where they could push out the line. I don’t know what he does at night, but by day he’s going round all the surrounding districts, finding out the lie of the land, for the long-awaited railway line. I have never seen such a thing in my life. And don’t even ask about Assen.  I’ll slap you for asking me stupid questions and wasting my valuable revolutionary time. Don’t you have a head on your shoulders? Then use it, man!

And so this Frenchie that I was telling you about, is rooming on the top floor, same as us, on the other side of the corridor.  And look how Fate sets things up that after we slept, me and Assen, I go to the yard to drink water and get something from the saddle bag and I see the Frenchie in front of me. He’s coming back, and as we pass, he gives me a nod for fellowship and lifts his hat off his head. After a few steps on, I turn around quick to see where he’s going and I see he’s going up the stairs and afterwards I hear a door close. So he’s gone to his room. Then I have a think and I go and drink water, then I come back up and I listen through the door to see if I can hear anything. There’s silence, boy. I can’t tell if the bloke’s asleep, who knows? When I come back to our room, I say to Assen: “Assen,” I say, “go downstairs and harness up Granddaddy Yovan so we’re ready for a quick getaway.”