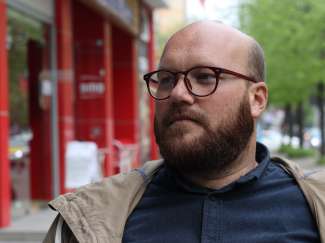 Petar Andonovski (born 1987, Kumanovo) is mainly a prose writer. He has a degree in general and comparative literature from the Faculty of Philology in Skopje and has been a writer in residence in Austria, Bosnia and Herzegovina, Kosovo and Montenegro. Currently, he works for the Polica publishing house. His novel Телото во кое треба да се живее (The Body One Must Live In) received the 2015 National Novel of the Year Award. His other previous work includes Ментален простор (Mental Space, poetry collection, 2008) and Oчи со боја на чевли (Shoe-colored Eyes, novel, 2013).

EUPL Year
2020
EUPL Country
North Macedonia
Страв од варвари
Several days after the fall of the Berlin Wall, three foreigners (two men and a woman) arrive at the small southernmost Greek island of Gavdos, where an isolated community of villagers seems to be frozen in time and to have been forgotten by the world. The voices of two female narrators, the foreigner Oksana and the local Penelope, tell the story of this novel. Their interchanging narratives are emotional accounts of their lives and their experiences on the island. The newcomer Oksana speaks about her escape from the Chernobyl disaster and Ukraine, the death of her partner Evgeni on the island, and her lurking fears about her uncertain future. Fears about the future are shared by the young local woman Penelope, raised and educated in a monastery and then isolated and trapped in an unhappy marriage on the island. Otherness and alienation are the underlying themes of the novel, which questions the notions of construction and reality until its very end. 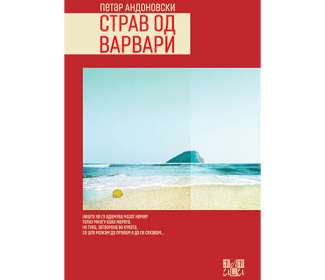 Translated from Macedonian by Kalina Maleska

Was it not you who dried up the sea, the waters of the great deep, who made a road in the depths of the sea so that the redeemed might cross over

I do not know how long it has been since we last saw each other. Today, when I look back on it, it seems as though it had been in another life. Since you left, I thought I would never leave Ukraine, that I would remain in Donetsk all my life, waiting for you to come back. Yet I abandoned Donetsk a long time ago, and recently Ukraine as well. Imagine, I live on an island now, wherever I turn I see the sea, although for now I only see it from the windows of my house. They are large, and it can easily be seen, whichever room I walk into, I see the sea in front of me. Large! – just as we imagined it. And the house too is just like the house from the postcard that your father brought, white, on two floors, the frames of the windows are blue, and the blinds are also blue, and in front of the door there is a lemon tree. Do you remember when I was ill and you came to visit me, it was snowing outside, snowing hard, and you brought to me two lemons, I told you I was cold, and you caressed my forehead, and told me not to worry, that one day we shall go to an island in Greece and always be warm there, and we shall have not only two lemons, but a whole plantation of lemons, that we shall live in a house just like the one from the postcard that your father brought. So many years later I did move to an island, I live in a house just like the one from the postcard that your father brought, and have a lemon tree as well, but I live with Evgeniy and Igor, not with you. You do not even know who Evgeniy is.

It was also afternoon when the fisherman threw the rope towards the people who were gathered, and we stepped onto the island for the first time.

For the last few years, Evgeniy and I lived in Kiev. Everything we had remained in Pripyat. One morning, Evgeniy accidently encountered Igor, a colleague from the power plant, who we presumed had died in the explosion. He told Evgeniy that after the disaster he had gone to Crete, that he lived in a village near Psiloritis. No one lives in the village, except for the few old people and cats. He survives by helping the old people and the shepherds from the nearby villages, and in return he receives food and an occasional drachma. There, he managed to convalesce from the radiation. In all these years, Evgeniy has constantly been sick, he has constantly been going to medical examinations. Before they parted, Igor told him that he had returned to see his father, who was in the hospital, but he would leave again in a few weeks, this time going to an island near Crete. To Gavdos.

A Boat of Fear: Penelope

If you had not escaped that night from the monastery, now we would certainly have been somewhere in Spain or in Portugal. That afternoon, when the fisherman tied the rope to the port, I knew I would stay there forever. The day I stepped on Gavdos, I promised myself I would never think of you again. And I did not think of you for ten whole years, until today, when Mihali came back home upset. For the first time, I saw fear on his face. They gathered early this morning in the tavern in order to wait for the doctor. While they were drinking rakia, the priest asked him what was new on the other side, pointing with his hand across the sea. The doctor told them that the Berlin Wall had fallen, that all of Europe was in a state of anticipation. They were all silent. Nobody understood what significance a wall in Europe could have.

Here, people live forgotten for years, history persistently avoids them, leprosy and famine have also avoided them, and just when they thought it would avoid them this time as well, Spiro rushed into the tavern, and started shouting loudly: “They came! There they are, they are approaching the port!” And without asking who they are, everyone set off toward the port in Karave. And then, from amid the tranquil sea, in the shape of a boat, fear was increasingly approaching them.

Three people came out of the boat, two men and a woman. The woman had short hair, and looked more like a man than a woman. The fisherman that brought them said they had come to the island for healing purposes. He told them they were Russians.

And then my blood froze. Not because of fear! – but because of the thought of you! I saw you standing, with the smile on your face which sister Teoktisti called devilish. You are laughing at them ironically while you see the fear in their eyes. You, who said you were not afraid of anything, not even of death.

Do you remember when those two Americans came to the monastery, said that they were journalists and that they wanted to photograph the girls who lived there, and sister Erotey nervously hopped on one feet, constantly reiterating that the mother supe-rior Teoktisti was not here, that she was visiting the Arkadi Monastery, all the while looking at the windows of her study room. And after long discussions with the Americans, you pulled my sleeve and told them we would pose. We stood and we posed. Out of shame, I was looking down at my dusty shoes, while you shamelessly laughed in front of the camera. Sister Erotey was standing aside and threatened all the time that she would tell you off to sister Teoktisti, and to me she only said that I should be ashamed of following your ideas, you were half-foreigner, such behavior suited you, and not me. But I never told you that I was a little afraid of them, and at the same time I was afraid of disappointing you since you constantly repeated that I was different, that I was not like the other girls.