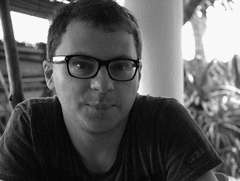 Piotr Paziński, born in 1973, is the author of three books: a monograph on James Joyce’s Ulysses, a subjective guide tracing the footsteps of Joyce's Dublin, and the novel Pensjonat, published in 2009 by the small Nisza Publishing House. For this novel, he received the Paszport Polityki, the cultural award of the Polish publication Polityka. Paziński lives in Warsaw, where he works as the chief editor of the Jewish magazine Midrash, and is working on a book of short stories.

On the surface, the plot of Pensjonat is fairly straightforward, describing a day trip to a boarding house outside Warsaw by a young man. As a small boy, he often spent time there with his granny, and he now encounters several aged guests who remember him as a child. But it is no ordinary boarding house: the residents are Jews who survived the Holocaust, and so everything that occurs here is like a dream about the past, a summoning-up of ghosts, a resurrection of not just people but also events, debates and ideological arguments from long ago.

Thus the plot only appears to be simple, but in fact it is set on several time scales and is bursting with typically Jewish anecdotes and parables. The past meets the present in the book - the old people see the past as something so close as to be almost within reach, but their recollections are also distorted by their obsessions or gaps in memory. They are the last living witnesses to the pre-war world of the Polish Jews, and the author shows in what form the Jewish tradition exists in Poland today. The book has an atmosphere full of warmth and gentle irony. It paints sensually rich images, and at the same time shows the diversity of the Jewish heritage: on the one hand it is a dialogue between different fates, and on the other it is an endless dispute about the ultimate questions, about the existence or non-existence of God, and about the issues facing the Jews. This dispute permeates the everyday world in a comical way, but provides meaning even when it is going through drastic changes, and most of the people taking part in the argument are dying. At that point it is taken up by the survivors, who resurrect the dead as partners in the debate.

We sit in silence, eyeing each other. The manager of the bed and breakfast, his office. Bed and breakfast. Big name. In the old days, they called it a “boarding house,” but “boarding house” sounds too bourgeois. Birkat haBayt, a blessing for the house, written on a decorative card above the bureau: “Let joy and peace reign in this house.” It wasn’t here before. It’s here in place of Isaac Leib Peretz[1]. Or maybe Sholem Aleichem[2]? Serious faces. The giants, classics of Yiddish literature—taken up to the mezzanine.

“Let’s go eat,” he invites me. “Supper is waiting. The others have already finished; it is fairly late. They prefer to eat an hour earlier, at six, so they rest before the evening news. Seven thirty, the holy hour. If some rabbi held a prayer, he would have a hefty crowd. Just that they prefer to sit in front of a television—that kind of prayer, at least nobody is nagging the Lord. Anyway, we even had a rabbi here, years ago. He came from America. He met with us, and let me tell you, they didn’t want to hear him. What do they care about a rabbi? Everyone here fancies themselves a rabbi. And women rebbetzin. But is that even a problem? In their generation? Though they have forgotten, so much time has passed. Since we installed the television sets in rooms, they come out only for meals—or not even that. The common room is a thing of the past.”

The common room, with its artless fresco, is located right behind the dining hall. Once it seemed to me a ballroom; that’s what I used to call it. Separated by heavy, arched doors—crystal framed in wood. Hard to peek in, sacral dusk permeated the inside. The most mysterious place in the house. Only for adults, but I was allowed to watch the bedtime children’s program before the evening news. A color television set showing a snow pattern because no one knew how to fix it. I’m alone in the dark ballroom until, next to me, in a neatly covered armchair, Sir Chaim whistles (…)The old days were always better. This is how the world is goes.

[1] I.L. Peretz (May 18, 1852 – 3 April 1915) —together with Sholem Aleichem, counted among the three fathers of Yiddish literature.  An author, playwright and Yiddish language literature activist, Peretz was also fluent in Polish and Hebrew.

[2] Sholem Aleichem (March 2, 1859 – May 13, 1916)—the pen name of Solomon Naumovich Rabinovich. One of the three great classical Yiddish writers, Sholem Aleichem is known to international audiences as the author of stories that formed the foundation for the musical Fiddler on the Roof.