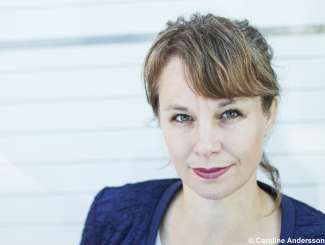 Sara Stridsberg, born in 1972, is a writer and playwright. Her first novel Happy Sally was published in 2004, and her breakthrough came two years later with the publication of The Faculty of Dreams, her second novel. Her third novel, Darling River, was published in 2010.

In addition to several important prizes, she has been shortlisted for the prestigious August Prize three times, the latest in 2012 for her collection of plays, Medealand. Stridsberg lives in Stockholm.

EUPL Year
2015
EUPL Country
Sweden
Beckomberga - ode till min familj (The Gravity of Love)
When Jimmie Darling is admitted to Beckomberga, a psychiatric hospital outside Stockholm, his daughter Jackie starts to spend increasing amounts of time there, and when her mother leaves for a holiday by the Black Sea, the hospital becomes Jackie's whole world.

The doctor in charge is Edvard Winterson. On some evenings he takes Jimmie and a few other patients to big parties in town. As soon as they pass the gates in Edvard's car, the first bottle of champagne is opened in the back seat. "One night beyond the confines of the hospital makes you human again," he says to his patients.

At the hospital we also meet Inger Vogel, an “angelic nurse in clogs” who seems to inhabit the twilight zone between order and devastation, and the patient Sabina, the object of desire of both Jimmie and Dr Winterson, with her beads, her archery and obsession with freedom and death.

Beckomberga explores Jackie's love for Jimmie and the way she reaches out for him, as a child and as a grown woman and mother. In Sara Stridsberg's beautiful novel, the psychiatric hospital, set in a lovely park close to a lake, takes on almost mythical dimensions, both as a punishing angel and as a rescuer seeking to save distraught souls, like in an old utopian vision. 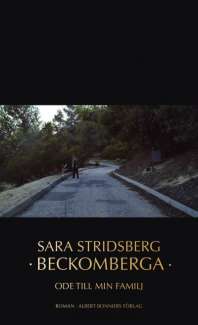 In the evenings they get away from the hospital. As the electric gates open and let the car through, the first bottle is uncorked in the back seat, always champagne that has been chilling in the cellar during the day. Edvard drives across the bridges in the direction of the city, through sleeping residential areas and streets. Sometimes a girl from the unit is already waiting in the back: sometimes it’s Sabina, sometimes it’s someone else, often half-comatose with medication. The birch trees shimmer in the twilight; Indian ink skies dappled with pink and yellow, stray wisps of cloud, birds, a haphazard drawing of the heavens. Edvard is convinced it’s good for the patients to get out of the unit every so often.

“One night beyond the confines of the hospital makes you human again,” he says.

Jim is given a crystal glass and in the glove compartment there’s a new shirt and a little bag of something that will make the night go faster. He sees the city pass by outside, men on their way home to their families, single women walking slowly along the streets, and sometimes, when they have stopped at a pedestrian crossing, waiting for the lights to change, he’ll find that he’s looking into the face of an old friend or colleague who’s standing there, waiting. Once, by a crossing outside the Ministry for Foreign Affairs, he looks straight into Lone’s face, before the car accelerates away and drives on through the light streaming out of the clubs that have just opened their doors to the night.

Once in a while a girl has a breakdown during the night in the apartment on Lill-Jans Plan and then she has to go back with them to the hospital at daybreak. “Winterson’s toys” they’re called, the girls who drift aimlessly around these parties, sometimes taking payment for their company, and, when they fall over, going back with Edvard in the car. They wake up later in an all-white room with his face hovering above them.