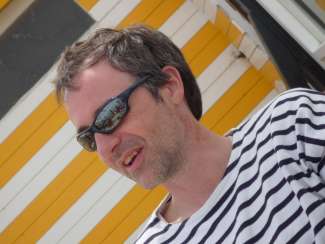 Tullio Forgiarini was born in 1966 in Neudorf, Luxembourg, the son of an Italian father and a Luxembourgian mother. He studied history in Luxembourg and Strasbourg. Since 1989, he has been teaching history, Latin and geography at the Lycée du Nord in Wiltz, Luxembourg. He is also very engaged with children having a difficult social background.

Forgiarini writes dark stories, mostly in French and inspired by série noire crime novels and genre films. He has had his work published in newspapers, magazines and anthologies and is the author of several novels. He is married and lives in Luxembourg.

EUPL Year
2013
EUPL Country
Luxembourg
Amok. Eng Lëtzebuerger Liebeschronik (Amok. A Luxembourg love story)
In 17 short chapters, Amok tells the story of an adolescent’s search for love, recognition, happiness and a place in today’s society. Via the use of often crude language, Tullio Forgiarini convincingly reflects the prevailing problems of social isolation, neglect, lack of perspective, behavioural disorders and senseless violence. Sharp dialogue, realistic depictions and a poetic economy in the carefully placed dream sequences distinguish Amok as a decidedly contemporary novel in both form and content. It leads the reader into an exploration of everyday realities that are often absent in the media as well as in public discourse. The reader is thrust into the imaginary and ingeniously crafted dream worlds of the protagonist that stand for his doomed attempts at escaping an unmanageable reality. They convey the sense of tragedy of the protagonist at simultaneously failing to negotiate and escape it. 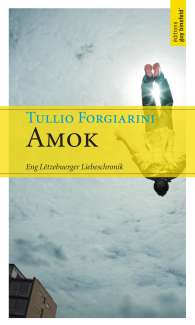 We’re too early. More than half an hour. Still, we’re not the first ones. A few cars are already at the car park. And a bus. And also kids. Probably 5th, 6th school year. They’re playing football. Well, the boys are. The girls are watching. And sniggering stupidly. The teachers are standing there as well. They’re already irritated. One has told off the boys. In German, I think. I haven’t heard her. We prefer staying in the car. To have a quiet smoke. Not to be seen too much. Shirley’s been keeping quiet. For quite a while, in fact. Since the event with……, with what happened yesterday evening. She doesn’t believe me, apparently. That I have already done it 20 times. Or, that it was cool. Or both. Oh, well. It wasn´t that cool. Well, nothing like in the movies. There it always lasts for…..15 minutes? Yeah, 15 minutes minimum! And the bitches are screaming their heads off …Yesterday, everything was done and dusted in 2 minutes flat. Without anybody saying anything……Well, afterwards Shirley asked “Was it nice?” and I said “Yes”……Shirley’s sleeping again. She sleeps every single minute when nothing’s happening!  That’s so annoying, but somehow I admire that. Every time you feel like it, just dropping off……Two buses left. I’m not counting the cars anymore. They are opening soon…… My back is itching again. Like mad. Not all the time, but now way too much. Actually, always when I’m alone……well, alone in my thoughts…… It’s trying to get out through my t-shirt. Through my jumper. Through my jacket. Even through the seat. I don’t get Shirley. How can she not be bothered about that? …… But, then again…… Nathalie didn’t say anything either……no matter……or……? …… I’m taking my iPhone out of my pocket. It’s switched off. ‘Cause of the cops. If I switch it on, they immediately know where we are. Or, maybe they don’t. If I just switch it on for a few seconds……just to see whether someone called……or sent a message……I turn it on. It takes a while ‘til it finds a network……and……3 calls. Twice my mum. And a number that’s not being displayed. Probably the cops……and a message. Also from my mum. I’m supposed to call her back. Nothing else. Just Call me back. Not even Call me back now! Or Please call me back! Only Call me back …… I turn it off again immediately. No-one gives a shit……almost no-one. The cops are searching for us. Because they have to. And…… Sandra as well. Because she thinks she has to. Because she thinks, a mother has to. Because she thinks she’s a mother. Because she thinks she’s my mother……