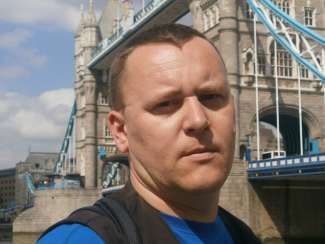 He has received the Biljana Jovanović literary award, the Vital Prize, and three screenplay awards (Novi Sad, Vrnjačka Banja and Warsaw). His drama Hadersfild (Huddersfield) won the Jovan Sterija Popović Award for the best contemporary dramatic text at the Sterijino Pozorje Festival in 2005. He has been a member of the Serbian Literary Association since 2007.

EUPL Year
2014
EUPL Country
Serbia
Sasvim skromni darovi (Quite Modest Gifts)
Quite Modest Gifts is a novel that draws its power from immediate and passionate experience, marked by impressive energy and sincere emotions. It is an epistolary novel in which two brothers exchange emails about their seemingly ordinary, but essentially unusual and exciting existence in Serbia and the United States. Through a form of family chronicle, the novel intertwines numerous narratives about the personal experiences of individual characters, while raising a number of challenging questions about the world we live in. By insisting on the key importance of family as the source and the outcome, as man’s elementary purpose, the author pushes to the background all other motives and problems, and reconciles all the opposites: from the generational gap to contrasts between the fervent centre, full of events, and the sleepy province; between the eastern cultural code and western mores, and between ideological differences and historical changes. 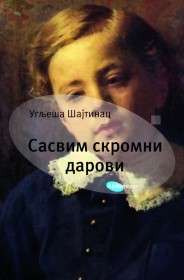 Indeed, my sons, we would fail if we had not already.
Themistocles

I'm somewhere on Broadway, further on down, and the rain is not just falling but is rather pelting me intermittently. Even so, in my wet earphones, I can still hear 'Three Easy Pieces' by John Cage. I’ve stopped under an awning and I’m trying to light a cigarette. An old woman turns after her umbrella which the wind has ripped from her hands. She’s laughing at herself. I’m laughing too. From the stream rushing down the street, over where her umbrella disappeared, a huge black dog on a leash now leaps out. That’s just how things are here, it seems. Things turn into beings, and beings turn into things. This actually isn’t just rain, it’s more like a tempest coming in from the ocean. I’m smoking and looking at my boots. The water has already covered them. Like every other foreigner, I imagine that there is someone standing next to me who understands the language I speak. I do have ghosts, yes, it’s only fair that I mention it to you. I inhale the rain and my Lucky Strike, as excited as when we were little and I heard Gordana’s voice and I see you gathering us like a flock of turkeys in front of the gate. Father is at work. Mother, too. Aunt Juliška is standing in the doorway and wiping her hands on a dishtowel. You herd us in and she grabs us and tells us, half in Hungarian, half in Serbian, not to leave the entranceway. Gordana pulls at my t-shirt soaked in water and laughs. Later, she grumbles when Aunt Juliška rubs our heads with a towel, and you stand at the threshold and look out into the yard. Then you ran off. I could never guess where to or why. You were older. You always had more of your own reasons than we, the younger ones, did. Even back then you had so many things which worried only you. Your bicycle, your rabbits, your inventions in the garden, like that wooden airplane-windmill, whose propeller spun on its shaft when the wind blew. How it would be rocking and spinning in this storm! If I ever don’t know what to do with myself more than now, because even now I don’t know, I'll start producing just such airplane-windmills because they don’t have them here. Not even Manhattan is perfect. There, the dog and its master have found each other. Now the man is kneeling in a puddle and petting his dog as if he is touching an important part of his own soul. You understand that. You used to have a weakness for the powerless.