We are pleased to announce the fourteen laureates of the 2019 European Union Prize for Literature:

The names of the laureates were officially revealed by the Romanian Minister of Culture and National Identity, Mr Valer-Daniel Breaz and Mr Tibor Navracsics, Commissioner for Education, Culture, Youth and Sport on 22 May 2019 at the Permanent Representation of Romania to the European Union in Brussels.

"The European Union Prize for Literature’s objectives are fully in line with those of the Romanian Presidency of the Council of the European Union, namely to protect and promote the EU’s rich cultural and linguistic diversity, to foster common European values and to boost the competiveness of our cultural and creative sectors. European literature is a fundamental part of our cultural identities and, through translation, it contributes to creating a shared cultural space. I am glad that the family of winners has been enriched today with more authors to be translated, enabling cross-border circulation of quality works, in the interest of European citizens", said Mr Valer-Daniel Breaz, Romanian Minister for Culture and National Identity.

Mr Tibor Navracsics, Commissioner for Education, Youth, Culture and Sport stated, "The European Union Prize for Literature showcases the creativity and the diversity of European literature and recognises the importance of our book sector. Through the Prize and the Creative Europe programme, the European Commission helps authors, publishers, translators and booksellers bring quality and variety to readers in Europe and beyond. I warmly congratulate all this year's winners".

The European Union Prize for Literature (EUPL) is an award which recognises outstanding new and emerging literary talents across Europe, and highlights the wealth of contemporary European literature, while drawing attention to the continent’s unique cultural and linguistic heritage. So far, the EUPL has rewarded 108 authors from 41 countries during a decade of its existence. Last year, the EUPL celebrated its 10th Anniversary with the ‘European stories’ short story contest open for all previous laureates. Entering its new cycle, the Prize is introducing its first ever laureates from Georgia and Ukraine.

The EUPL is organised by a Consortium comprising the European and International Booksellers Federation (EIBF), the European Writers' Council (EWC) and the Federation of European Publishers (FEP), with the support of the European Commission. As funded by the Creative Europe, it is accessible to all countries participating in this EU funding programme for the cultural and creative sectors for 2014-2020.

National juries, consisting of experts in fields of literature, publishing and bookselling, are set up in each country participating in the EUPL in the respective year. After shortlisting 3 to 5 authors, the national Juries choose their laureates who receive a financial prize but also benefit from increased international visibility and cross-border promotion, starting with the Awards ceremony in Brussels and continuing at major book fairs in Europe and beyond.

Mr Jean-Luc Treutenaere, co-President of the European and International Booksellers Federation, said, "It is a pleasure for the European and International Booksellers Federation to congratulate, this year again, fourteen brilliant and emerging talents whose works represent the diversity and the richness of our European culture. We wish them a very bright career and we hope to see many of their books on the shelves of bookshops all over Europe. Indeed, the future of these fourteen literary works is to cross borders while enabling us to understand our neighbours and open our minds to their own culture.”

"For this fourth cycle of EUPL laureates, I have been impressed by the high interest raised by the Prize in each of the selected countries and wish to thank all those who have helped organise juries. I am delighted that so many women have made it as laureates which demonstrates how crucial they are in the literary scene. I look very much forward meeting all of them when we organise the event on 2nd October in Brussels", stated by Mr Rudy Vanschoonbeek, President of the Federation of European Publishers.

The Awards Ceremony, in the presence of all winning authors, will be held on 2 October 2019 in Bozar, Brussels. 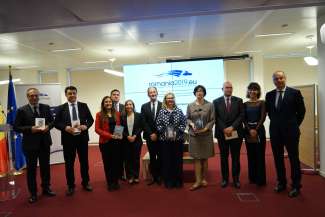