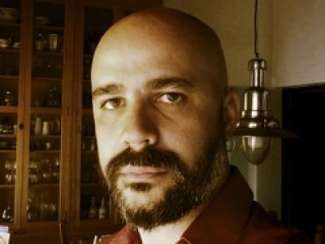 Born in 1971 in Figueira da Foz, years later he would visit more than 60 countries. In 2008, he published his first novel, The Flesh of God: The Adventures of Conrado Fortes and Lola Benites, and a year later The Encyclopedia of World Story, which won the Camilo Castelo Branco Grand Prize. In 2011, he released The Books Which Devoured My Father (Maria Rosa Colaço Literary Prize) and The Human Contradiction (SPA/RTP Authors Award).

He was awarded the European Union Prize for Literature in 2012 for his novel Kokoschka's Doll. Jesus Christ Drank Beer was considered the Best Portuguese Novel of the Year by TimeOut Lisbon magazine and the Best Novel of 2012 by the readers of the reference newspaper Público.

In 2013, he published the novel Where Do Umbrellas End Up (winner of the Portuguese Society for Authors Award). Flowers, published in 2015, won the literary prize Fernando Namora and was praised by critics, with rights being immediately sold to various countries.

As an illustrator, he won the 2014 Portuguese National Illustration Award for Capital. As well as writing and illustrating, he is a director of animated films and member of a band called The Soaked Lamb.

In 2016, he published the novel Not All Whales Fly and, in 2017, his most ambitious outing, a non-fiction book, Jalan Jalan: A Reading of the World. In 2018, he published his latest novel, The Karenina Principle, and a book for children, How to Cook a Child.

EUPL Year
2012
EUPL Country
Portugal
A Boneca de Kokoschka (The Kokoschka's Doll)
Kokoschka's Doll acts as a symbol and metaphor for a story of friendship, a story of how the Other is fundamental for our own identity. The characters include Isaac Dresner, a Jew who developed a limp in his left foot, after he was burdened with the memory of his best friend being killed in front of him during World War II. The reader is also introduced to Bonifaz Vogel, a man with a suspended conscience, Tsilia Kacev, an Orthodox Jew who gets stigmata, and a millionaire, Zsigmond Varga, who wants to weigh the human soul, measuring evil and sin with a hydraulic scale. Music is a constant in this story, which also includes defeated poets, a man who is too kind, Kokoschka's doll itself, and a guitar player who classifies people under chords: bearded philosophers, for example, are diminished seventh. 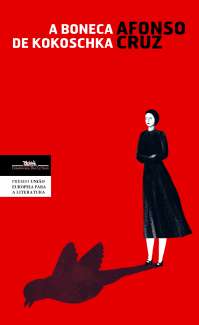 My grandparents from my father’s side

The day is half death, half life, as can be grasped by the quantity of light and darkness that make it

That day, when death blends with life, was when my grandmother from my father’s side died, on Pentecost, during the preparation of a great lunch. My grandmother didn’t cook because she was pregnant, she could deliver at any moment.

A heavy oak table had been set in front of my grandfather’s house (he was a gravedigger). The great oak-tree at the entrance would cast its shadow without asking—as men do—anything in return. The blend of life and death could be clearly seen, the table being a dead oak, the oak’s shadow giving life.

Most guests didn’t show up, they didn’t want to share a table with the gravedigger (he was my grandfather from my father’s side), blending life and death, blending mouths burying corpses with mouths celebrating life: those who made a living out of farming and from toiling the land. However, deep down, a gravedigger and a farmer aren’t that different. Both place their hope on the land, some cast the seed, others the corpse, but both hope someday, from whatever is buried, life will burgeon.

My grandmother’s name was Marija and she was from Breslov—just like the rabbi Nachman. Funnily enough, her job was the opposite of my grandfather’s: she was a midwife. The two of them formed a circumference, a ring where the entire human drama is enclosed. That afternoon, from her belly, my grandfather brought his son to the world. A son born from my dead grandmother, in a movement contrary to the one my grandfather was used to accomplish: instead of burying the corpse in the grave, he took life from it, he unburied a child. He took from the land to seed in the air. That’s how my father, David Dresner, was brought to the world.