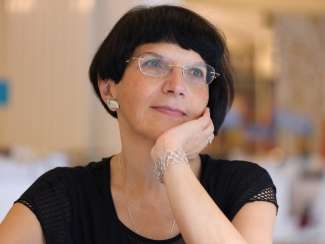 Ioana Pârvulescu was born in Braşov, Romania, in 1960. She graduated from the Faculty of Letters at the University of Bucharest, establishing herself as a distinct voice within literary circles. She is currently Professor and teaches modern literature at the same faculty. She has coordinated the series Cartea de pe noptieră (Bedside Book) at Humanitas Publishing House, worked as an editor at the literary journal România literară, and has also translated from French and German (Maurice Nadeau, Angelus Silesius, Rainer Maria Rilke, Milan Kundera, Saint-Exupéry and Asterix by René Goscinny and Albert Uderzo). She published several bestselling books (essays) about everyday life in the 19th century, between the two World Wars and during communism. In 2018 she published a book about the prayers of certain literary characters from the world literature, Dialoguri secrete, Secret Dialogues. She wrote four novels, all very well received: Viața începe vineri (Life Begins on Friday, 2009), Viitorul începe luni (The Future Begins on Monday, 2012), Inocenții, (The Innocents , 2016) and her latest, Prevestirea (The Prophecy, 2020).

She is the winner of the Professional Jury Prize of the 10th Anniversary of the EUPL contest (2018) with the short story The Voice.

See here for an interview with the author.

EUPL Year
2013
EUPL Country
Romania
Viaţa începe vineri (Life Begins on Friday)
Life Begins on Friday is a unique and charming journey into the amazing world of times gone by – a world more than 100 years distant, but very similar to our own in its core features.
A young man is found lying unconscious on the outskirts of Bucharest. No one knows who he is and everyone has a different theory about how he got there.

The stories of the various characters unfold, each closely interwoven with the next, and outlining the features of what ultimately turns out to be the most important and most powerful character of all: the city of Bucharest itself. The novel covers the last 13 days of 1897 and culminates in a beautiful tableau of the future as imagined by the different characters.

We might, in fact, say that it is we who inhabit their future. And so too does Dan Creţu, alias Dan Kretzu, the present-day journalist hurled back in time by some mysterious process for just long enough to allow us a wonderful glimpse into a remote, almost forgotten world, but one still very much alive in our hearts. 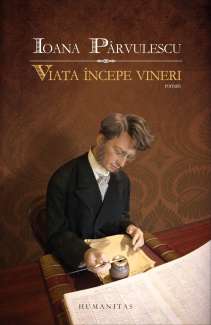 I like to read in the carriage. Mama takes me to task; Papa, who never forgets, not even en famille, that he is Dr Leon Margulis, primary physician with a surgery behind the National Theatre, says that I will ruin my eyes and give birth to nearsighted children. But I am obstinate and still bring a book with me. Back in their day they probably had the time to read and do lots of other things, but we youngsters have to dole out our hours with care. I could hardly wait to find out what Becky would get up to next in Vanity Fair. Although truth to tell, I think that I am more like that silly Amelia, and I shall end up loving some rascal all my life. Today I had no luck with my reading. Firstly, because my hands were frozen. And then, no sooner did we climb into the carriage than Mama and Papa, chopping the subject as finely as our cook does the parsley, began to dissect the case of the unidentified man Petre found lying in the snow this morning, in a field near the Băneasa woods and lakes. He was taken to the Prefecture of Police and placed under arrest. Mama, who is up to date on absolutely everything, says he is a fugitive from the madhouse and that he must have been driven insane by too much learning. And here she gave me a minatory look: “It is high time that Iulia decided on a decent man to marry.” Papa examined the stranger at the request of Costache, our friend from the Police, and said that he was not a vagrant, despite his wearing unbelievably odd clothes. Perhaps he is a clown from the circus. He is otherwise clean and has no “physiological” flaws apart from the fact that he does sometimes talk in a garbled way. If he is a madman, then he is a cultivated madman; he “couches his words nicely”. But when Papa asked him whether he had tuberculosis, the man gave him a scornful look, as if infuriated, and answered cuttingly: “You’re a two-bit actor!” Papa replied, as gravely as he does whatever the situation: “Sir, if you please, I am not an actor, but a physician!” He added that his lungs sounded a little congested, that he was very pale, but that he could not find any serious illness. The man calmed down and said that he would like to smoke. Papa, who is against the habit, nonetheless brought him some fine tobacco and rolling papers from Costache’s desk, but said that the man under arrest, after giving him a savage glance, quite simply turned his back on him. He is ill bred! They retained his valise for examination, a silver box, like a safe, which indicates that he might be a money forger, but they released him after keeping him under arrest for only an hour and following a brief interrogation by Costache. On finding himself free, he straightaway made himself scarce. But the best coachman in the Police was assigned to follow him unobtrusively.