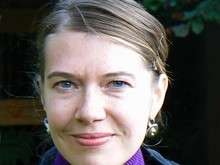 Laura Sintija Černiauskaitė (b. 1976). Prose writer, playwright. She was born in Vilnius. In 1994 she left Vilnius Senvage School and in 1996 – enrolled into Vilnius University Department of Extramural Studies to study the Lithuanian language and literature. In 1998-1999 she worked as a freelance publicist at magazine Malonumas, in 2000 – as a language editor at children magazine Genys, in 2001-2002 as a journalist at magazine for young mother Tavo vaikas. In 1993 she won the republic competition of young philologists and was awarded with 1st rank diploma for the best pupil prose. In 1994 she also won a competition of the First Book organized by the Writers Union. In 2001 a play Liberate the Golden Foal (Išlaisvink auksinį kumeliuką) won a play competition organized by The Fairies Theatre and Vilnius University Philology Department. In 2003 a prose and plays selection Liučė Skates (Liučė čiuožia) is published and appears among the 12 best books of the year selected by the experts of Lithuanian Literature Institute. The same year her play Liučė Skates is staged in a National Youth theatre. In 2004, Liučė Skates (Liučė Čiuožia) wins a first prize among 300 participators in an international play fair Theatretrefen organized in Berlin. She is a member of Lithuanian Writers‘Union since 2004.

EUPL Year
2009
EUPL Country
Lithuania
Kvėpavimas į marmurą (Breathing into Marble)
Breathing into Marble is the fourth book by this young and talented writer. But it is her first novel, a well-crafted drama about painful solitude, family, and relationships between men and women. Černiauskaitė writes about yearning, about unused intimacy, about the gentleness and burdens of the heart, about life, about something from below and something from above. This is the story of a young mother named Isabelle and her young family, which adopts a six-year-old boy who is unable to put down roots in his new family and kills his ill adopted brother. It’s a romantic ballad with the plot of a thriller. It’s a deep psychological analysis of a mother’s soul. It’s a book full of so many strong emotions that it is almost possible to feel the characters breathing down your back while you read it. 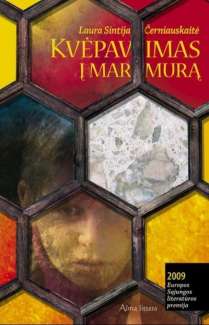 A fox had been wandering into the grounds of the children’s home. Not through a gap in the wattle fence, but through the gate like anybody else. Its fur, red like a paintbrush dipped in ashberry-colored paint, would flash between the tree trunks as it arrived. At first, because of concerns that the fox might be rabid, the children were not allowed to come near it. The guard set a trap. But the fox started visiting every day. It would walk around the trap and soon it became clear that despite the rules the older children had tamed her. With this in mind, Beatrice would let the children feed the fox leftovers from the kitchen.
But just like that, the fox disappeared. The little ones who used to leave it presents by the fence every day after supper were disconsolate (in the right mood, the fox used to poke its arrogant snout in through the fence and wait for them to move away).
About a week later, the guard found it just off the side of the road. The fox’s fur was no longer blazing red: it lay in the moss like a heap of decomposing leaves. The guard gave it a kick and flipped it on its back. The light fur on its chest was matted with blood and a black knife wound on its throat had congealed. He hid the carcass under the brush and in the evening he returned to bury it with the gardener’s shovel. The children were told that the fox had had kids and would no longer visit. ‘When you have kids, you have to give up fun and games in order to take care of them. Animals often know this better than people,’ it was explained to the children.
But Ilya already knew that all storybook beginnings end sooner or later when reality sets in. And in reality, nothing lasts for very long. Each day takes something from you, and if you’re ever given anything, it’s only so that someone can steal it from you later. The evil one who toys with you so cruelly is doing it for his own pleasure. Ilya was certain he felt it that he really exists. He flickered at the edge of Ilya’s imagination. Sometimes he would enter Ilya’s dreams, but never as anything concrete. His mocking presence would fill the room behind Ilya’s back like spilling ink. His icy breath brought chills to Ilya’s spine.