Mila Pavićević (b. 1988) was born in Dubrovnik. She reads Comparative literature and Greek language and literature at the Zagreb University. She received several literary awards for young writers in Croatia.

EUPL Year
2009
EUPL Country
Croatia
Djevojčica od leda i druge bajke (Ice Girl and Other Fairy-tales)
The book, entitled Ice Girl and Other Fairy Tales and consisting of 13 stories, is a clever combination of the miraculous and supernatural intertwined with the real. It’s written in such a way that there is no obvious separation or contrast between the real and the invented, between possible and impossible. 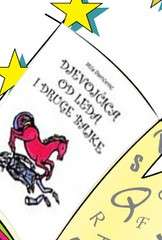 Every time a clown dies, his red nose turns into a star. (All of those stars make up the Great Player constellation that can be seen only from the other side of the North.) While his nose is burning bright in the night, the immortal spirit of the clown goes to the Land of the Moon, where it rests from his jokes… Once upon a time, somewhere in a desert, a fairly young and rather unknown clown was wandering about. He had no house, not even one he could carry around with him. All he had, all he ever needed in the desert, was a flute he used to call the birds and a large basket in which he kept his not-so-good audience – one large grey tomcat named Auror. From day to day, this nameless clown roamed the desert looking for someone whom he could make laugh, someone whose laughter he could really hear. Auror, you see, did not know how to laugh. He did not even know how to speak and, as far as friends go, he was not one of the best. So, the birds that the clown would summon with his flute were his best audience in the desert. They made him happy because he often thought he could hear children’s laughter in their chirping. And so, one morning, as he was sitting on his favourite sand dune, waiting for the sun to come up, the clown took out his flute and started to play his most beautiful melody, hoping the birds would come. But the birds did not come on that day, for it was too early. The birds always came with the sun. Even Auror was still dozing in his basket. Only one colourful and not terribly nasty snake crept up to the clown to listen to his playing. When he reached the most beautiful part of the tune, the snake accidentally bit him and the clown instantly fell asleep. The birds were still not coming and Auror was not moving in his basket, for he was too lazy. And the snake went away as though nothing had happened. And what happened to the clown? His red nose flew up to the stars and there it is today, the brightest star in the entire constellation. Left lying on the sand were his clothes, whose colours would fade in the sun with time.