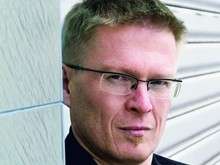 Paulus Hochgatterer, (b. 1961), lives as a writer and child therapist in Vienna. He has received various literary prizes and commendations, most recently the Elias Canetti Stipend of the town of Vienna, and is the author of several novels and story collections.

EUPL Year
2009
EUPL Country
Austria
Die Süsse des Lebens (The Sweetness of Life), 2006
This novel takes us through the lives of a group of damaged people living in a pleasant and seemingly tranquil Austrian village. It’s a village where nothing dramatic occurs, until one Christmas… It’s the Christmas holiday, the presents have been opened, and a six-year-old girl is drinking cocoa and playing Ludo with her grandfather when the doorbell rings. Her grandfather goes to the door, talks to someone there, gets his coat, and goes out. When her grandfather doesn't come back, the little girl puts on her new green quilted jacket with a squirrel on it and goes out to find him. She follows some footprints and finds her grandfather's body on the ramp that leads to their barn. There is no doubt it is his body - the clothes are his - but his head has been crushed to a bloody pulp. The little girl goes home and says nothing for the next few days. However, the body is discovered the morning after the murder, and detective superintendent Ludwig Kovacs – a middle-aged divorcé who loves gazing at the stars, has a daughter he can't communicate with and is beginning a new relationship with a local woman - has to solve this case and the spate of animal killings - chickens, ducks, hamsters and 16 hives' worth of bees - which follow. On a basic level, this novel is about a horrific crime and the investigation which follows. But it's really about far more than this. It's about harming children through trauma, violence and cruelty, and it’s about the pain that parents and elders can cause. Hochgatterer pulls back the veil of normality and reveals the part of life going on beneath the surface. 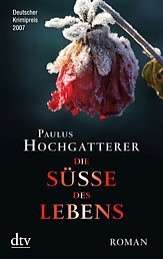 I’m eating mashed potatoes with fried onion rings. Lore cooked it. It tastes alright, especially the onion rings. She’s still a Polish whore all the same. I’m drinking lukewarm peppermint tea. Gerstmann is going back and forth across the car park, clearing it with the snow plough. It’s pointless as it’s going to snow again tomorrow. Gerstmann does pointless work and we pay him for it. Sometimes he just takes one of the cars and goes for a spin. Then he comes up with some excuse such as the car’s got to have a run around. Dad says that Gerstmann is the most important man in the company after Reiter, head of sales. Because he knows everything that’s going on.
Daniel’s back. He’s lying down in his room, asleep. He never used to sleep so muck. He says he’s got to catch up. He says that after four shitty months of being deprived he really needs to catch up.
The dishwasher door is jammed. I leave the plate next to the dishwasher. Lore will clear it away. Daniel says that at home she prays to a picture of a saint who worked miracles, and then she does it with various men. Just like all those Polish whores. They’ve all got shocking hairstyles, too, mostly platinum blonde.
I help myself to a slice of Christmas stollen from the plate. It’s from the cake shop and a week old already. Mum says that there’s so much fat in it that it won’t go stale. It tastes like it, too. Maybe a touch of vanilla. The second slice tastes of almost nothing but fat. It’s a miracle that I’m not getting porkier. That’s what everyone says who’s seen me eat. Daniel says that people who are highly strung can eat what they like without getting fat. But that can’t be true, as our dad’s tummy hangs over his belt and they don’t come more highly strung than him.
The door to Daniel’s room is closed. I imagine him lying there on the bed, on his stomach, his right arm wrapped around his head. He said that sometime he’d tell me what happened inside.