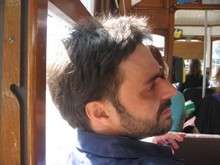 Răzvan Rădulescu (b.1969) was born in Bucharest. As a student, he became a member of Letters, one of the most important training centers for young writers at the time, led by another famous author, Mircea Cărtărescu. Rădulescu’s text was published in the anthology Tablou familie in 1995. His critical reception included winning the Romanian Writers' Union prize. His second novel, Teodosi cel Mic, was received with enthusiasm by many commentators. He has also written screenplays and collaborated with various magazines.

EUPL Year
2010
EUPL Country
Romania
Teodosie cel Mic (Theodosius the Small)
Răzvan Rădulescu’s novel Theodosius the Small, a fantasy that wraps social concerns in fairytale attire, contains a range of characters that would not be out of place sitting at the same table as today’s politicians, strategists or media personalities. In Rădulescu’s world, the geography of Romania is transformed: borders are jumbled in such a way that new historic roots are formed in the resulting territories. Within a fantastical version of Wallachia, we find miniature kingdoms, containing both familiar contemporary localities, such as Bucharest, Filiaşi and Petrila, together with places established by the narrative, such as the Mushroom Fields, Strawberry Fields and Mushberry Valley. The backdrop appears to be historical but, nevertheless, the story has many elements taken from the contemporary world. Although the novel concerns childhood as seen through an adult’s eyes, it is not about childhood itself. Rather, it is about its fantasies, about the way in which the events of today’s world are transformed by the vision of a child into a fantastical madness containing comic horrors and sad comedies. 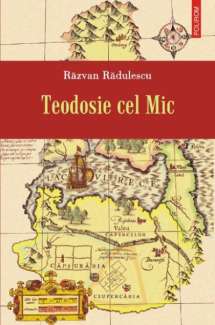 In spite of the sumptuous preparations the Catdog and Theodosius had made for the Sheatfish Protector’s reception (the entire residence had been inundated in water, the pillows from the couch and the napkins in the kitchen were slowly spinning in the blue eddies, and the rugs had risen ten or even twenty centimetres aloft and were fluttering in slow motion), the latter, whether from excessive caution or because he wanted to be entertained in a less customary fashion, had arrived in his own travel aquarium and requested that the banquet be held in the shade of the walnut tree. The Catdog had punctiliously complied, and assisted by Theodosius he had brought out a long table. “There’s no need for any chairs,” the Sheatfish Protector gestured behind the glass of his spacious aquarium in token of refusal. Indeed, through the none too limpid water of the aquarium – lake water, as Theodosius imagined – it was possible to see a little table with curved legs, on which stood three dishes all in a row (one deeper, for the soup, another shallow, for the main course, and the last smaller, for dessert) ; an ice bucket on a stand, and a separate compartment for ice cubes ; and an armchair, in which the Sheatfish Protector was lolling. The armchair was quite similar to the one Theodosius had seen at the bottom of Cold Lake, but was probably lighter. In addition, the aquarium of the Sheatfish contained a plain serving table, lake sand and silt – which eddied up from the bottom whenever the Sheatfish shifted position on his throne – two pots with filiform freshwater plants, and a complicated device, consisting mainly of an articulated tube, a funnel, and numerous rubber grommets, which allowed the fish to make himself heard when he deigned to speak. Around the panes of the aquarium, fastened by cords, it was possible to draw rich drapes, whose folds were now crammed into the corners. The entire glass construction and all its contents rested on a metal stand, from which two sturdy and skilfully decorated handles protruded to either side. The aquarium could be lifted and carried from place to place by means of these handles. For this none too pleasant task (since the aquarium, with the Shearfish in it, must have been rather heavy), the fat fish was accompanied, besides another six fishes of lesser rank, by four bearer fishes, themselves encased in their own aquaria. Of course, the aquaria that ensured a natural medium for those who transported the Sheatfish Protector were less sumptuous and had no facilities whatsoever : there were neither tables nor chairs nor ice buckets (in any case, during the entire course of the subsequent banquet, nothing was to pass the lips of the bearer fish). Their aquaria sooner resembled glass suits of armour, through which their arms and legs protruded into the air, strangulated by joints with rubber garnitures and riveted rings.