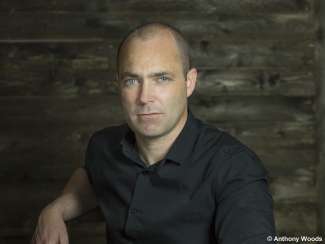 Donal Ryan was born near Nenagh, County Tipperary, in 1976. He was a civil servant for many years, and was only able to devote himself to writing from 2014, following the success of The Spinning Heart, the novel he wrote during the evenings of the summer of 2010. Ryan received 47 rejections before finding a publisher. His novels have gathered a great deal of critical acclaim and The Spinning Heart was longlisted for the Man Booker Prize. He lives in County Limerick with his wife and two children.

EUPL Year
2015
EUPL Country
Ireland
The Spinning Heart (Le Coeur Qui Tourne)
Synopsis:
“My father still lives back the road past the weir in the cottage I was reared in. I go there every day to see is he dead and every day he lets me down. He hasn’t yet missed a day of letting me down.”

In the aftermath of Ireland’s financial collapse, dangerous tensions surface in an Irish town. As violence flares, the characters face a battle between public persona and inner desires. Through a chorus of unique voices, each struggling to tell their own kind of truth, a single authentic tale unfolds.

The Spinning Heart speaks for contemporary Ireland like no other novel. Wry, vulnerable, all too human, it captures the language and spirit of rural Ireland, and with uncanny perception articulates the words and thoughts of a generation. Technically daring and evocative of Patrick McCabe and JM Synge, this novel of small-town life is witty, dark and sweetly poignant.
Donal Ryan’s brilliantly realised debut announces a stunning new voice in literary fiction. 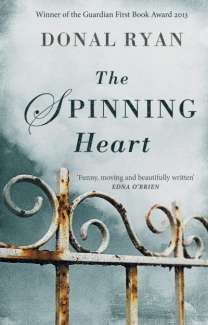 MY FATHER still lives back the road past the weir in the cottage I was reared in. I go there every day to see is he dead and every day he lets me down. He hasn’t yet missed a day of letting me down. He smiles at me; that terrible smile. He knows I’m coming to check is he dead. He knows I know he knows. He laughs his crooked laugh. I ask is he okay for everything and he only laughs. We look at each other for a while and when I can no longer stand the stench off of him, I go away. Good luck, I say, I’ll see you tomorrow. You will, he says back. I know I will.

There’s a red metal heart in the centre of the low front gate, skewered on a rotating hinge. It’s flaking now; the red is nearly gone. It needs to be scraped and sanded and painted and oiled. It still spins in the wind, though. I can hear it creak, creak, creak as I walk away. A flaking, creaking, spinning heart.

When he dies, I’ll get the cottage and the two acres that’s left. He drank out Granddad’s farm years ago. After I have him buried, I’ll burn the cottage down and piss on the embers and I’ll sell the two acres for as much as I can get. Every day he lives lowers the price I’ll get. He knows that too; he stays alive to spite me. His heart is caked with muck and his lungs are shrivelled and black, but still he manages to draw in air and wheeze and cough and spit it back out. I was left go from my job two months ago and it was the best medicine he could have got. It gave him an extra six months, I’d say. If he ever finds out how Pokey Burke shafted me, he’ll surely make a full recovery. Pokey could apply to be beatified then, having had a miracle ascribed to him.

What reason would I have ever had not to trust Pokey Burke? He was young when I started working for him – three years younger than me – but the whole parish had worked for his auld fella and no one ever had a bad word to say much beyond the usual sniping. Pokey Burke was called after the Pope: Seán Pól, his parents christened him. But his brother Eamonn was not yet two years old when his parents brought the new baby home and he decided the new baby was Pokey and everybody agreed away with him and little Seán Pól was stuck with Pokey for a lifetime. And beyond, if he leaves anyone behind that will remember him or talk about him when he’s gone.